(Minghui.org) Similar to the Western saying, “you reap what you sow,” according to traditional Chinese culture, good deeds are rewarded and bad deeds are punished.

In the persecution of Falun Gong, tens of millions of innocent practitioners have been mistreated for their belief in Truthfulness-Compassion-Forbearance. The tragedies include arrest, detention, imprisonment, torture, brainwashing, forced labor, and more. More than 3,900 practitioners have been confirmed to have died as a result of torture in police custody, according to reports published on Minghui.org.

Many government officers, especially those in the law enforcement and judicial systems, are driven by the “610 Office” and the Political and Legal Affairs Committee (PLAC) at different levels to carry out the persecution as ordered by former Party leader Jiang Zemin. As hundreds of officials fell during political turmoil under various charges, 709 have been documented by Minghui.org to have suffered negative consequences in 2015.

Such incidents started not long after the persecution began in 1999. Peng Kaifa, Deputy Party Secretary of Qiyang County in Hunan Province, once told police officers, “You can mistreat [Falun Gong practitioners] beyond the boundaries of the law, and you will not be held responsible for your actions.” But as he talked about further actions against practitioners during a PLAC meeting in 2001, he collapsed onto the floor and later fell into a vegetative state at Changsha Hospital.

Unfortunately, similar cases have continued to the present. Li Shaoju, head of the Pulandian City Public Security Bureau and Domestic Security Division in Liaoning Province, was directly involved in the persecution of many practitioners. Several practitioners had previously tried to persuade Li not to follow the communist regime's orders to harm practitioners, but Li ignored them. He later hosted a meeting on February 9, 2015 to propose a new wave of arrests. Just as he was shouting and attacking Falun Gong, however, he collapsed and died of a cerebral hemorrhage.

His death worried other officers, and neither of his two deputies would fill his position.

Below is a distribution of cases believed to be of karmic retribution, grouped by cases related to personnel in various government functions: 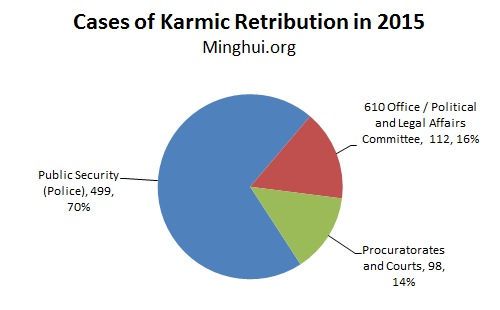 The same data can also be categorized by ranks: 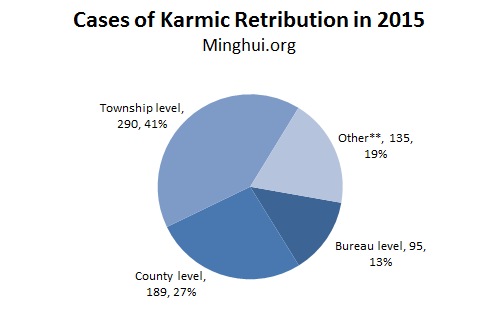 ** Three of the 135 are provincial-level officers.

The breakdown of these numbers by both function and rank is summarized in the table below:

This table indicates that public safety officers (responsible for arresting practitioners) had the highest death toll, while the 610 Office and procuratorate (bringing charges or decide detention terms) had the highest percentage of death.

“Torture and Forced Labor in Shenyang No. 1 Prison”