(Minghui.org) A petition to claim compensation for Mr. Luo Jiangping's death five days after he was released from prison was accepted by the Supreme People's Court on June 2, 2016.

The court told the family's lawyer that it is investigating the case and would make a decision before December 2, which is within the deadline of six months.

Tortured and Injected with Poisonous Drugs

Prior to the Supreme People's Court, Mr. Luo's wife had filed compensation claims and complaints with provincial courts and the prison administration about his wrongful death, but all were rejected.

Mr. Luo Jiangping, a Falun Gong practitioner from Sichuan Province, was serving a four-and-a-half year term in the No.1 Prison in Yunnan Province, for distributing informational flyers about the communist regime's persecution of Falun Gong. He was tortured and injected with unknown drugs at the prison.

Despite his deteriorating physical condition and his lawyer's strong objection, the prison refused medical treatment.

The prison finally released Mr. Luo on medical parole when he was in critical condition on December 23, 2013.

Emaciated and extremely weak, Mr. Luo told his family that he had been injected with poisonous drugs. His hands showed dark hard bumps in the size of grapes. His teeth and gums were all black, and his teeth were covered with coagulated blood. The inside of his mouth was rotting, and his stomach was bloated. He was in extreme pain.

Only five days after he was released, Mr. Luo passed away at the age of 51. 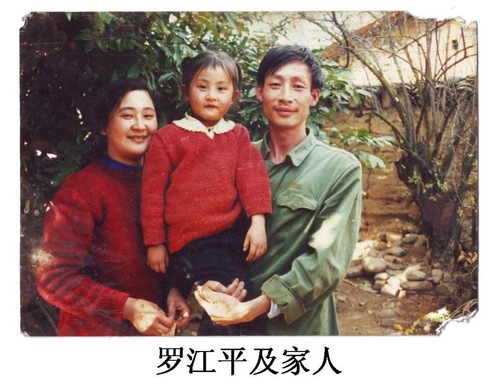 Mr. Luo with his wife and daughter

Refusal to Grant a Compensation Claim

After Mr. Luo passed away, his family asked to review his medical record during his imprisonment and demanded that the authorities investigate the reasons for his death. Their request was denied.

Mr. Luo's family filed a complaint and compensation claim with the prison on March 25, 2015. The prison refused to accept the claim and did not give an explanation.

After the lawyer put pressure on the prison, officials told Mr. Luo's wife to provide documents proving that she was still married to Mr. Luo at the time of his death. Even after she provided the document, the prison still refused to accept her compensation claim.

More than two months later, the lawyer tried to file a complaint against the prison at the Prison Administration Bureau of Yunnan Province on June 5, 2015. The Bureau staff reprimanded its security staff for allowing the lawyer to enter their office and demanded that he leave.

The lawyer refused to leave, citing that this office had the responsibility to supervise legal violations by prisons. He was forcibly removed from the office and began recording the event on his phone. As officers attempted to take his phone, the ensuing struggle attracted spectators from other offices.

To control the situation, a Bureau staff member agreed to talk to the lawyer in their office. After negotiation, the lawyer agreed to delete the video on his phone, and the administration office accepted the complaint.

The Prison Administration Bureau informed the lawyer on November 30, 2015 that the prison was not responsible for Mr. Luo's death or his physical problems.

The lawyer filed a petition with the High Court in Yunnan Province on December 15, 2015 against the Prison Administration Bureau and the prison for covering up the crime.

The petition was accepted by the High Court. However, the judge gave the lawyer the runaround and put off the lawyer's request for investigation into the torture that Mr. Luo suffered in the prison, the deprivation of medical treatment, and denial of family or lawyer visits.

In a court session on March 14, 2016, without the lawyer's presence, the High Court issued a verdict rejecting the petition and other compensation requests from Mr. Luo's family.

The court stated in the verdict that after it looked into notes and spoke to witnesses from the prison, it decided that the prison staff and inmates had not tortured Mr. Luo; thus, the prison did not have to provide compensate for his death.

The High Court rejected the lawyer's request to review or cross-examine the evidence it used to reach the verdict.

His lawyer then filed a petition with the Supreme People's Court, which accepted the case and informed him that the investigation is in process.