Mr. Luo told family members that he was injected with large doses of unknown drugs. 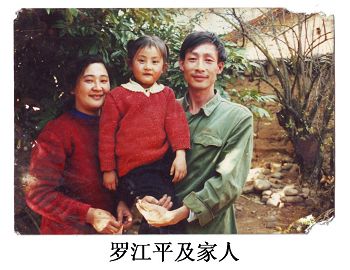 Mr. Luo Jiangping and his family

Below is the translation of a recording with Mr. Luo:

He was asked, “Did they inject you with poisonous drugs after you met with the lawyer?”

Mr. Luo responded, “Yes. Yes, after I met with the lawyer at the hospital that was managed by the Bureau of Prison Administration. I became disoriented after the injections. I fell unconscious and was not clear-headed.” 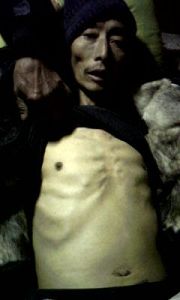 Mr. Luo before he passed away

During his final days, Mr. Luo told his family again that he had been injected with poisonous drugs. His hands showed dark hard bumps the size of grapes. His teeth and gums were all black, with his teeth covered with coagulated blood. The inside of his mouth was rotting.

Mr. Luo was emaciated when he was released. The officials of the Yunnan No. 1 Prison claimed that medical parole was granted because he suffered from advanced liver disease. They also gave his family a hard time when processing the paperwork for his release.

Police officer Li and another officer from the Salian Township Police Station went to Mr. Luo's home on December 24, 2013, the day after Mr. Luo was released. They demanded that the family notify police when Mr. Luo leaves his home. The family had them look at Mr. Luo, and the two officers left without saying another word after seeing him.

Mr. Luo's mother and his family tried to visit him on December 16, 2013, at the Yunnan Province No. 1 Prison. Commander Dong of the No. 6 Squadron said that he was hospitalized at the Prison Central Hospital. He demanded that any visitor needed to show identification. Only three family members were allowed to see him because the others didn't have their ID cards.

Mr. Luo was brought into the visiting room in a wheelchair pushed by the medical staff. He was emaciated and his hands and feet were swollen. Upon seeing his terrible state, his mother lost consciousness and so did Mr. Luo. He slipped off the wheelchair. The medical staff took him immediately out of the room.

His family returned to the prison the next day. Prison officials finally agreed to release him on medical parole.

The family members' pictures were taken. They had to provide their signatures before they could process the release documents. The prison officials refused to release him until his two sisters showed documentation that they were his relatives.

Officials from the Miyi County 610 Office and Political and Legislative Affairs Committee claimed that those family members who visited Mr. Luo had “invited Falun Gong practitioners to make trouble at the No. 1 Prison.”

Mr. Luo is from Salian in Miyi County, Panzhihua City, Sichuan Province. He had suffered from leg pain since he was a teenager. His family was too poor to afford medical treatment, so he spent much of his youth in pain.

Mr. Luo started practicing Falun Gong in 1996. He lived by the Falun Gong principles of Truthfulness-Compassion-Forbearance. He returned to good health after he read Zhuan Falun and practiced the five sets of exercises.

After the Chinese Communist Party (CCP) banned Falun Gong on July 20, 1999, Mr. Lou was repeatedly arrested, had his money extorted, and his home was ransacked.

Officers from the Miyi County Police Department, including the Criminal Investigation Unit, the Political Security Section, and officials of the Salian Township Government had persecuted Mr. Luo.

He was illegally sentenced to a five-year prison term at the beginning of 2002. While at the Deyang Prison, Mr. Lou was tortured with various methods and forced to perform hard labor.

“Only Dafa Can Save Us”