Six plaintiffs--three men and three women--charged Jiang with false imprisonment, deprivation of the constitutional right to religious belief, and unlawful seizure of private property, among other offenses. 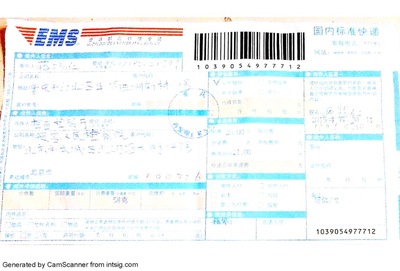 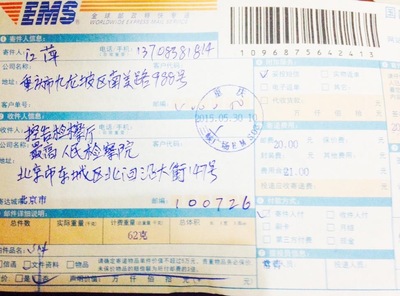 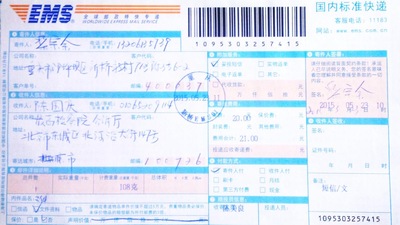 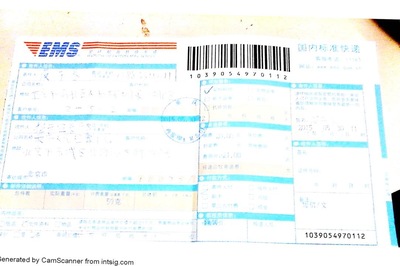 Receipts verifying that the complaints were mailed

Mr. Li Zongyu was arrested in November of 2000 for attending a family Falun Gong gathering and distributing materials downloaded from the Minghui website.

In 2001, the Dadukou District Court in Chongqing found him guilty of “interfering with law enforcement using a cult organization.” He was sentenced to nine years.

In his complaint, Mr. Li pointed out that his sentence violated the Chinese constitution, which guarantees its citizens the freedoms of speech, gathering, and belief.

Mr. Li also noted that the Dadukou District Court invoked the wrong legal provision. Since Falun Gong is not listed as a cult organization in the legal document “Interpretation of the Supreme People's Court and the Supreme People's Prosecutorial on the Concrete Application of Law on Handling the Cases of Committing Crimes by Organizing and Using Cult Organizations,” possessing Falun Gong materials is not against the law.

In the latest official list of “cult organizations” announced by the Ministry of Public Security of China in April 2005, Falun Gong is not one of the 14 on the list.

Mr. Li contends that the court cannot use what Jiang Zemin said--calling Falun Gong a “cult” in an interview in a French newspaper--as legally binding.

Due to the severe physical torture in the detention center and prison, Mr. Li developed optic atrophy and partial paralysis. The estimated cost of corrective eye surgery is about 300,000 yuan (50,000 USD).

In the labor camp, he was deprived of sleep. For 43 days, he was given a quarter of a bun per day, an eighth of the portion of a standard prison meal. He was also forced to jog for 45 minutes daily. The camp guards ordered the criminal inmates there to hit his heels and knees with bamboo sticks, which caused severe swelling.

Other Plaintiffs' Accounts of Torture

Ms. Pi Kairong was held in Banan Detention Center in Chongqing for a month in 1999. She was arrested again in March 2000, and was incarcerated in Maojiashan Women's Forced Labor Camp in Chongqing for seven months.

In January and July 2001, Ms. Pi was arrested twice and held in a detention center for a month both times. Later in 2001, she was sentenced to two years of forced labor.

In September 2006, she was arrested again. After being held in Liudianzi Detention Center for 22 days, she was sentenced to two years of forced labor camp.

In May 2000, Ms. Wang was jailed in Huaxinjie Detention Center for two months, and later was held in Maojiashan Women's Forced Labor Camp for four months.

In 2008, Ms. Wang was arrested again and held in Huaxinjie Detention Center for 20 days.

Ms. Jiang Ping was arrested in March 2001 and incarcerated in a brainwashing center for a month. Her employer reduced her monthly salary to 100 yuan(about 16 USD). In January 2002, she was arrested again and incarcerated in the Chongqing Women's Forced Labor Camp for two years. She has been constantly watched and harassed by the local police since she was released from the labor camp.

BackgroundIn 1999, Jiang Zemin, as head of the Chinese Communist Party, overrode other Politburo standing committee members and launched the violent suppression of Falun Gong.The persecution has led to the deaths of many Falun Gong practitioners over the past 16 years. More have been tortured for their belief and even killed for their organs. Jiang Zemin is directly responsible for the inception and continuation of the brutal persecution.Under his personal direction, the Chinese Communist Party established an extralegal security organ, the 610 Office, on June 10, 1999. The organization overrides police forces and the judicial system in carrying out Jiang's directive regarding Falun Gong: to ruin their reputations, cut off their financial resources, and destroy them physically.Chinese law allows for citizens to be plaintiffs in criminal cases, and many practitioners are now exercising that right to file criminal complaints against the former dictator.