Many media reported favorably about the practice during this time, and extolled to their readers the benefits of practicing Falun Dafa. They made sure to state that the practice was taught free of charge.

The Guangdong Falun Dafa Assistance Center and the State General Administration of Sports invited survey specialists to do a sample survey of 10,000 practitioners in Guangdong Province in 1998.

Professor Hu Mingqin, from the Department of Pathology of the First Military Medical University, was in charge of a seven-member team. The team published a “Survey Report on Falun Dafa Practitioners' Health and Mental Status in Some Areas of Guangdong Province” on September 1, 1998. Among the 12,533 practitioners surveyed, 97% reported improvements in their health.

This survey concluded that practitioners with late-stage illnesses had become healthy, and that practicing Dafa could improve people's morality. Overall, they found that the practice was widely beneficial to society on all fronts.

The Heyuan City Agricultural Commission cultivated a 100-acre orchard in Luwu Village, Linjiang Town, Heyuan City, Guangdong Province. During each harvest season, almost every household in the village had been stealing fruit from the orchard and selling it at the market. To stop the thefts, officials often paraded thieves through the village, but this act of shame did not stop the thefts.

When Falun Dafa was spread to this small village of 300 people in 1998, about 80 people took up the practice, and they quit stealing. They also influenced others, which resulted in the villagers no longer stealing fruit from the orchard. A Falun Dafa Experience Sharing Conference was held in Guangzhou, and Luwu practitioners used this story to explain the benefits of Falun Dafa. 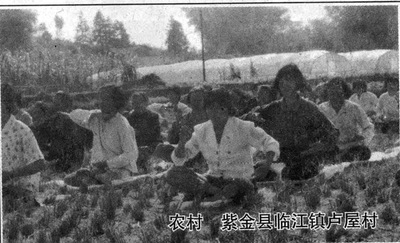 The change at Luwu village was a perfect example of how Falun Dafa had benefited Chinese society across the board. Luwu provided a fundamental example of how Dafa requires its practitioners to improve their moral character by following the principles of Truthfulness-Compassion-Forbearance.

9. More and More Begin the Practice

Over 600 teachers and students in the department headed by Dr. Gao Dawei at South China University of Technology began practicing Falun Dafa. These practitioners worked hard and cultivated their moral character, and their health improved, which in turn saved the university a considerable amount in medical expenses.

Dr. Gao's department achieved good scientific research results due to the coordination and cooperation between the teams. They won the only prize awarded to higher educational institutions in Guangdong Province in 1999.

Li Guosheng, a practitioner from Meihua Town, Maoming City, Guangdong Province, used to use drugs, and was in poor health. He gave up drugs soon after he bean practicing Falun Dafa, and his health improved. He shared his experience at the Maoming City and Guangzhou City Experience Sharing Conference. His story was published in a newspaper.

Falun Dafa was introduced in Chaozhou in 1996, and many people came to learn the practice. There were over 2,000 practitioners in Chaozhou City (including Raoping County and Chaoan County) by 1999.

There were 200,000 practitioners in Guangdong by 1999. They were dedicated, unselfish, kind, compassionate, and helped improve morality.

11. Signs of the Impending Persecution

Luo Gan, the former minister of Public Security and secretary of the Political and Legal Committee, sent out a secret order to police nationwide to investigate Falun Dafa and to interfere with Falun Dafa activities.

The Photography-Fine Art-Crafts Exhibition, to commemorate the third anniversary of Mr. Li Hongzhi Teaching Falun Dafa in Guangdong, was held in the great hall of the Railway Corporation on April 15, 1996. It was halted after the first day because of police interference.

The Publicity Department of the CCP began to persecute Dafa covertly. The publication of Zhuan Falun, the main book of Falun Dafa, was prohibited. Articles that slandered Falun Dafa were published in newspapers and magazines.

The Shenzhen Special Zone Daily and Southern Rural News published articles that slandered Dafa in 1998, although the paper apologized after the paper's staff learned the facts about Falun Dafa.

Some officials in Guangdong government departments opposed the central government attacks on Falun Dafa. The Propaganda Department of Guangdong Province, in its “Reply to Guangdong Provincial CPPCC Eighth Meeting No. 405 Proposal,” said, “We held a special meeting regarding the attack on Falun Dafa as mentioned in the proposal. We require that the media in the province stop publishing similar reports. We emphasize again that the principles of 'no publication, no criticism, and no argument' on qigong and human sciences must be strictly adhered to.”

After a thorough investigation on Falun Dafa by late 1998, the Guangdong Province Sports Commission approved an application by the Guangzhou Falun Dafa Assistance Center for an experience sharing conference at Tianhe Stadium.

One day before the conference, Guangzhou police threatened officers from the Sports Commission and staff of the stadium, attempting to cancel the conference. They also notified practitioners that the conference would be canceled.

The conference was eventually held in two separate venues—the Guangzhou Military Stadium and the Stadium at Jinan University. Each conference was attended by 3,000 practitioners.

Former CCP head Jiang Zemin launched the persecution of Falun Dafa on July 20, 1999, and prevented further spreading of the practice in Guangdong.