The Art of Zhen Shan Ren on Exhibit Near Melbourne, Australia

(Minghui.org) The opening of the Art of Zhen Shan Ren exhibition was held in Shirley Burke Theatre Gallery in Parkdale, City of Kingston, about 40 minutes from Melbourne, on the evening of May 7, 2015.

Around 50 guests braved the winter weather to attend the opening of the month-long exhibit. The energy in the little gallery was palpable. 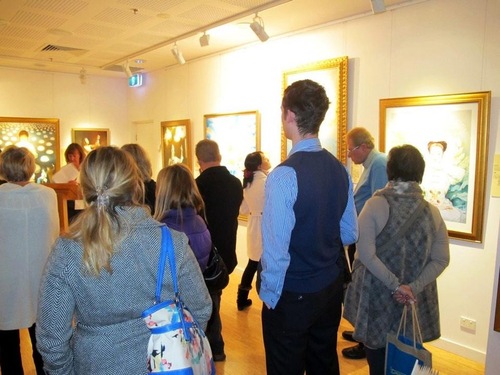 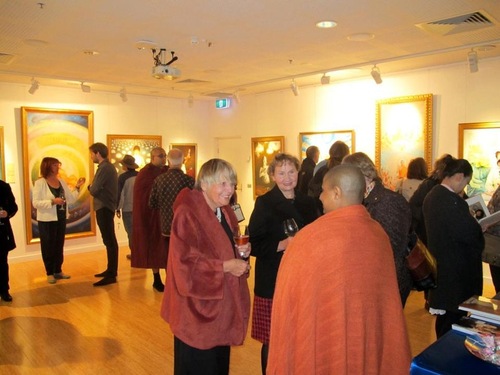 Over 50 guests attend the opening of the Art of Zhen Shan Ren. 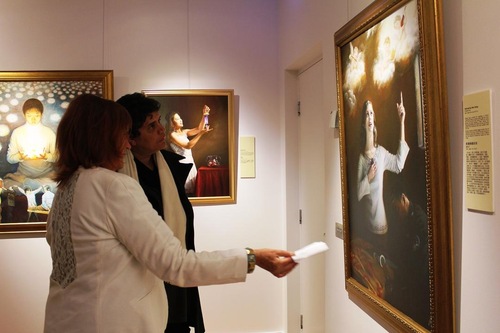 A practitioner describes the paintings to a guest. 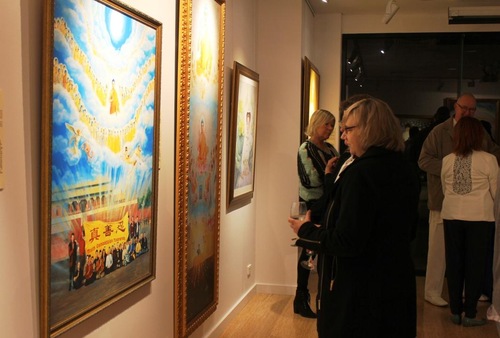 In her speech at the opening, Ms. Janine Rankin, the coordinator of the exhibition, welcomed the guests and thanked Kingston Arts for the gallery.

She spoke about the beauty of the practice of Falun Dafa and drew attention to the ongoing persecution of its practitioners in China. She told the gathering that, since Falun Dafa was banned in China 16 years ago, many thousands of practitioners have been tortured in an effort to force them to give up their belief. Some of the art works portray the terrifying ordeals that these practitioners, including the artists themselves, have endured.

Many of the guests remarked that Ms. Rankin's remarks had given them an insight into the practice and an understanding of why it was persecuted in China and had piqued their interest in Falun Dafa and its benefits. They were particularly appreciative of the quality of the art and said that they would come back with friends.

Hairdresser and makeup artist Leonie Rendell was moved to tears. “The paintings, the emotions, the looks in the eyes, you feel their souls. It is just beautiful! It is so moving, you just feel the soul, and I think that says it all.” 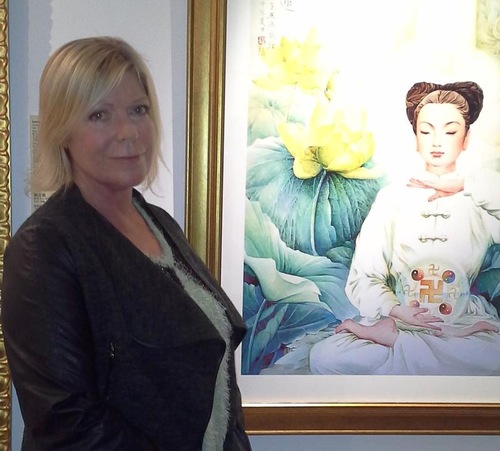 One of Ms. Rendell’s favorites in the exhibition was "Pure Lotus," the painting of a girl sitting in meditation.

Bhakta Dasa, a minister with the Hare Krishna, had high praise for the exhibition. “Everyone should be free to worship and honor God in the way they see fit. I think this is a wonderful expression of it. It is sad to hear of the torture and the suffering that has gone on.” 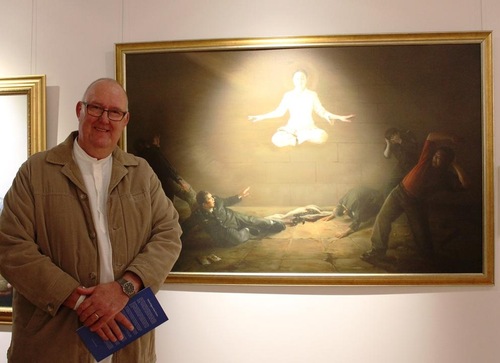 Bhakta Dasa, a minister with the Hare Krishna, had high praise for the exhibition.

Genevieve Marie is a family councilor and chairman of Kingston Interfaith Network. “I love the exhibition,” she said. “I really connected to it. I love 'The Call of Innocence' by Chen Xiaoping of a young child standing in the rain holding a placard. I can see the practice just in the painting. We’ve spoken about this practice, but now I see it in the images – it really tells a story. It’s very touching.” 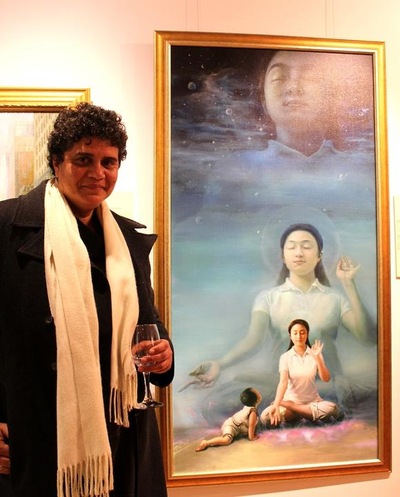 Genevieve Marie is a family councilor and chairman of Kingston Interfaith Network.

Ms. Marie said that she thought the persecution in China was very wrong for all the religions that are banned there, “I belong to interfaith in Kingston, and we really believe in freedom and respect. The values of Falun Dafa--Truth, Compassion and Tolerance--are universal values and can’t really offend another religion. How could they offend anybody? Truth, Compassion and Tolerance are beautiful qualities. Imagine if that were taught in schools, imagine it were taught everywhere, if people practiced those basic beliefs – the world does need that.”