(Minghui.org) Despite her spinal injury resulting from abuse, Ms. Wang Jiping was yanked off the bed and dragged back and forth on the floor by inmates at the Judong Labor Camp in Jiangsu Province, who were ordered to do so by guards. She screamed in pain, but the tormentors repeated the dragging several times per day for over a month. She eventually became totally paralyzed.

Ms. Wang is not alone. Many other detained Falun Gong practitioners have also been subjected to similar dragging torture for refusing to give up their beliefs.

The perpetrators often perform such torture during extreme weather conditions, to increase their captives' suffering. While detained at Masanjia Labor Camp, Ms. Xin Shuhua from Benxi, Liaoning Province was once stripped to her underwear and dragged on icy ground during the winter.

Ms. Wu Houyu was subjected to such dragging torture on hot summer days while detained at Nanmusi Women's Forced Labor Camp in Sichuan Province. The temperature had reached 39°C (102.2°F) when she was dragged along rough ground, back and forth, for days on end. Her lacerated body was covered with broken pieces of clothing stuck together with blood, torn flesh, and dirt and grit from the ground.

The dragging torture is usually done by holding onto certain body parts (such as hands, feet, or hair) or an object attached to the body (such as rope, scarves, handcuffs, or shackles). The victim is dragged forward and backward on various surfaces. There are also times when the tormentors yank the practitioner up or down stairs.

Dragging by the Collar or Scarf

Mr. Pan Xujun was met with retaliation when he went on a hunger strike in May 2009 to protest his illegal detention at Hongzehu Prison. The guards poured water on the already frozen ground during winter months, and dragged him by the shirt collar. Mr. Pan nearly suffocated on several occasions.

Ms. Zhang Shuxia from Shenyang suffered similar torture while detained at Liaoning Women's Prison in 2005. The then-60-year-old recounted her ordeal, “They wrapped my neck with a scarf and dragged me around on the floor by the scarf. I soon passed out from suffocation.”

Dragging by the Hair 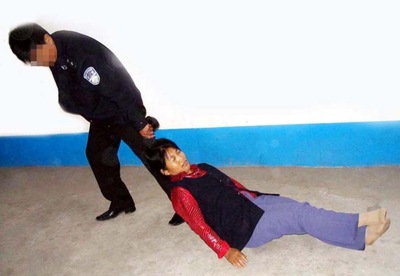 Torture reenactment: Dragging by the hair

Two guards at Tumuji Forced Labor Camp in Inner Mongolia grabbed Ms. Tan Liyun by the hair and dragged her out of her cell. Her heels were soon bleeding, and her clothes torn off. Seven other female practitioners were tortured the same way that day - June 6, 2000.

Dr. Liu Xiaorong was dragged downstairs by the hair, to the prison workshop, hundreds of meters away. The guards at Shijiazhuang No. 2 Prison gagged her with a feces-soaked towel to keep her quiet. Dr. Liu was tortured liked this every day in May 2001. Blood from her injuries stained her clothes and the path.

After Ms. Zhao Huijun from Benxi, Liaoning Province refused to sign a statement renouncing Falun Gong, the guards grabbed her by the hair and dragged her around in a pool of water. They dubbed such torture “swimming.” 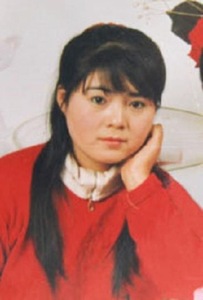 Guards at the Wanjia Forced Labor Camp once tried to move Ms. Ma Zhongbo to the men's ward, but she firmly refused. In retaliation, a female guard grabbed hold of Ms. Ma's hair and dragged her along the rough sandy ground, covering her body with cuts and bruises.

Dragging by Lower Limbs or Shackles 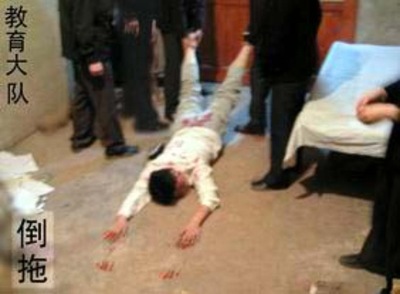 Torture reenactment: Dragging by the feet

Mr. Zhao Fei from Dalian, Liaoning Province became too weak to walk after he went on a hunger strike to protest his illegal detention at Masanjia Forced Labor Camp in 2007. The guards then ordered inmates to drag him by the feet from his cell on the fourth floor, to the cafeteria on the ground floor. This happened three times a day for more than ten days in a row, severely injuring Mr. Zhao. His blood was tracked all over the stairs and the ground.

The guards at Lanzhou Prison put Mr. Wang Yongming in shackles, which were very tight, and cut into his flesh. They then ordered inmates to grab his shackles and drag him backward to the office, causing tremendous pain.

Ms. Zhou Cuimei and Ms. Xin Shuzhen were once detained at a brainwashing center in Wei County, Hebei Province, for refusing to give up their beliefs in Falun Gong. The guards there wet the floor and dragged the two women by their feet, back and forth, to “mop” it up. They were barely breathing from the abuse, but were simply dragged back to their room and left there without any medical care. 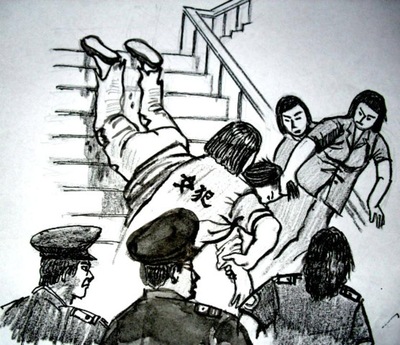 Torture reenactment: Dragged down the stairs

Ms. Zhu Guilin, from Changde, Hunan Province, was subjected to much torture in Baimalong Women's Forced Labor Camp. During her hunger strike against the persecution, the perpetrators dragged her every day by the arms, backward from the third floor to the ground floor, where fluids were administered by IV. Her entire body was covered with abrasions and bruises as a result.

Xu Shiqian (CCP secretary of the political and legal affairs committee of Baiguo Town in Macheng) once fastened the hands of Mr. Qiu Bingluo, a Falun Gong practitioner in Hubei Province, to the back of a motor bike. Xu started the motor bike and rode away, dragging Mr. Qiu behind him. When Mr. Qiu passed out from the abuse, Xu poured cold water over him to wake him up, and then rode on again.

Dragging by Hands and Feet

Ms. Cao Yixiang was forbidden to use the toilet when she refused to renounce Falun Gong. She wet her pants as a result, and the guards at Shandong No. 2 Women's Forced Labor Camp ordered two criminal inmates to grab her feet and arms, and drag her back and forth to wipe up the urine on the floor.

Ms. Xin Shuhua was dragged back and forth between her cell and cafeteria at meal times every day while she was detained at Masanjia Forced Labor Camp in December 2005. On the way to the cafeteria, the guards dragged her downstairs by her shackled feet, with her face up, resulting in head injuries. On the way back to her cell, they dragged her upstairs face down by holding her handcuffs. The 300-meter-long pathway to the cafeteria is paved with gravel. Ms. Xin was severely injured and her blood stained the pathway and the staircase.