Guided to Find Falun Dafa in the Philippines

(Minghui.org) In the hills of a beautiful island near the Philippine coast resides a couple who count themselves lucky to have discovered the ancient Chinese cultivation practice known as Falun Dafa, or Falun Gong. Despite living far from any city, Michael and Bernadette Wolf happened to stumble upon Falun Dafa on the Internet in 2009. 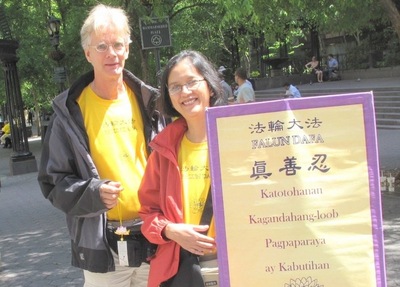 Of course, they believe it was more than luck and happenstance that brought them to Falun Dafa. “I had been searching my entire life for the meaning of life and was guided to find it,” said Michael.

Surfing the Internet on that auspicious day six years ago, Michael came across a British Broadcasting Corp. (BBC) article about the persecution of Falun Dafa. The article even provided a link to the Falun Dafa website to learn more. He found the practice to be very righteous and started learning it right away.

Cultivation of Mind and Body

Bernadette was not as eager, but agreed to try it out after Michael had continued with the practice for a year. She found herself captivated by Mr. Li Hongzhi's [the founder of Falun Dafa] book, Zhuan Falun, and kept reading it day after day.

However, doing the Falun Dafa exercises was another story. “I was a bit reluctant, since I can be quite lazy when it comes to physical exercise,” she recalled. “Still, I pulled myself together and followed along with my husband's movements. When doing the second exercise, which involves holding up the arms for quite some time, I made up my mind to keep my arms up despite being tired.”

Bernadette described practicing outdoors and persevering even when insects and ants crawled on her. “But, truthfully, I struggled so much with doing the exercises that I considered telling my husband that Falun Dafa was not for me.”

The thought of not practicing Falun Dafa lingered in Bernadette's mind until one early morning, when she felt an unusual, whirring sensation in her abdomen. When she told Michael about it, and he said that it must be the Falun. Bernadette didn't really believe it until she re-read the introduction in the book Falun Gong, where it says:

“I will first adjust your body to a state suitable for advanced cultivation and then install a Law Wheel (fa-lun) and energy mechanisms in your body.” (Falun Gong)

“I was awestruck, to say the least,” said Bernadette. “This experience made me believe in and commit to being a Dafa practitioner, as well as treasure the honor that was given me.”

Life, prior to practicing Falun Dafa, was not easy for the couple. They struggled to pay their bills, with the electric company once cutting off their electricity.

A book illustrator and artist, Bernadette said that for a long time she was unable to land any projects.

Since she had a lot of free time on her hands, she joined Michael in doing the exercises and studied the Dafa books daily. The exercises, though simple, demanded much fortitude and focus. The couple also took trips to the cities to raise awareness about the persecution of Dafa in China, which took a great deal of time and energy.

“To be honest, I often found myself with doubts about going on, yet in my heart, I felt it was the sole purpose of my life,” said Bernadette.

Then, their fortunes changed. Bernadette met up with a friend who she hadn’t seen for some time. This friend had a book project that needed an illustrator and was delighted to find that Bernadette was available to work on it. While working on her project, another friend requested Bernadette's services. Since then, Bernadette has had a steady stream of project offers.

Full of gratitude, Bernadette said, “Because I practiced Falun Dafa and believed in Master, without any hidden agenda, the opportunities of earning a decent income had materialized.”

Their finances stabilized and they were able to do things they could only dream of in the past. They went to Taiwan and saw the Shen Yun show, as well as attended two Falun Dafa conferences in New York.

“It was simply unbelievable,” marveled Bernadette. “Yet I knew with all these blessings and gains, I must not get complacent and had to keep working toward a higher standard in my cultivation.”

With all that she gained, Bernadette realized that her work as artist was also a great opportunity to lose—her attachments that is.

For it says in Zhuan Falun,

“Whenever people tell me that they like my work, I see it as a test of my sense of pride and competitive mentality and try to take it lightly,” said Bernadette. She also admitted, “When other artists brag about their work, I often detect the attachment of jealousy arising in my heart.”

Through the process of studying the teachings and looking within for her attachments, Bernadette said that mindset changed tremendously. “I understand now that we should live by the principles of Truthfulness-Compassion-Forbearance in all that we do,” she said.

In following the principles, Bernadette found this reflected in her artwork, which she noticed now had a different aura. “When people see my illustrations, they smile and say that they are beautiful,” she said, “Now, instead of feeling proud, my first thought is, 'Thank you, Master!'”