The Herald: Chinese Refugee in Washington Recounts Torture for Her Belief

(Minghui.org) The Herald, a newspaper based in Everett, Washington, published an article on October 17, 2015 describing how a local resident was mistreated in China for practicing Falun Gong (also known as Falun Dafa).

Written by staff writer Amy Nile titled “Lynnwood woman relishes freedom of religion banned in China,” this article focused on Echo Liu, 42, who had been imprisoned in China for her belief. 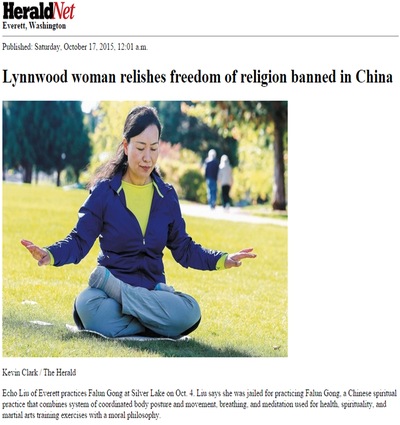 Voice for Those Who Have No Freedom

Liu started to practice Falun Gong in 1997 when she was working as a journalist in Beijing. “Falun Dafa, is a spiritual practice that combines exercises, meditation and a moral philosophy focused on truthfulness, compassion and forbearance.” wrote the article.

Liu and other residents in Everett joined a protest last month during the visit of Chinese leader Xi Jinping. She said she felt a moral obligation to speak out about the injustices Falun Gong practitioners have endured. More importantly, unlike China, Liu now has freedom to tell her story and practice her faith without fear.

“It’s especially crucial for those who are still being severely persecuted. Their voices cannot be heard,” Liu said in the article.

She became interested in Falun Gong after her mother’s health improved as a result of the practice. “Unlike most traditional churches, Falun Dafa has no official hierarchy, membership or fees,” wrote the article.

Another practitioner, Jenny Hu, also experienced physical improvement from the practice. After starting to do the exercises in 1996 to get rid of headaches, she has been healthy ever since.

Prior to the suppression in 1999, Liu' career went well: first working for Beijing News and later editing bestselling books at a publishing company. In her spare time, she volunteered to tell others about the benefits of Falun Gong.

“In 1999, her life changed abruptly. The Chinese Communist Party started a propaganda campaign aimed at eliminating Falun Gong practitioners.” While she was pregnant in 2000, Liu was detained by the authorities for 10 hours because of handing out Falun Gong materials. After her release, she was demoted at work, forced to write statements giving up her belief and attend brainwashing classes.

Several months after having her baby, authorities arrested her again though she was breastfeeding. “She was taken to a prison where she was deprived of sleep, forced to watch propaganda videos about Falun Gong, and listen to threats of harm to her family,” wrote the article.

Authorities arrested her one more time in 2008 because the government tried to hide human rights violations from foreign journalists prior to the Beijing Olympic Games. “She was beaten, locked in solitary confinement and forced to work in toxic environments.” She served two years and three months for refusing to renounce her belief.

“I do not want to sell my soul,” Liu said in the article,“What they could do to your physical body is very limited if you keep your soul or spirit intact.”

Liu's husband was a powerful attorney and she was a journalist with connections in Boston. As a result, “she was treated far better than many other prisoners. There have been reports of torture and organ harvesting from Falun Gong followers.” Shortly after she was released, her family came to the U.S. in 2010 through a business connection.

“For me, the crucial thing is the freedom of choice,” Liu said in the article. “You can live up to what’s right with dignity.”