(Minghui.org) Mr. Zhong Dongsheng, one of the 13 practitioners illegally arrested in July 2014, was brutally beaten during the arrest and later tortured during interrogation. He became emaciated and weak after a hunger strike and both of his legs became swollen.

Mr. Zhong Dongsheng, was brutally kicked and punched during the arrest and his entire body was bruised. Several officers carried him into the police car. 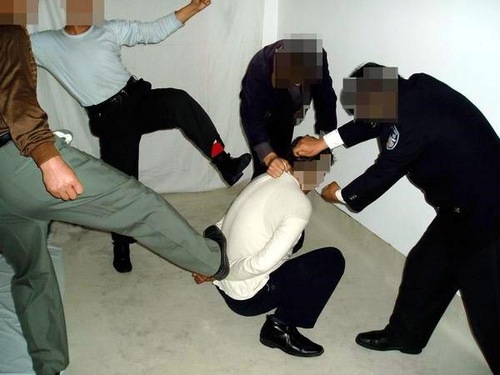 After his arrest, the director and several police officers from the Yuanshi Police Station broke into his home and ransacked it.

Mr. Zhong was taken to the county hospital for a blood sample after the arrest. It is noted that Chinese authorities take blood samples from practitioners for possible future organ harvesting. He was later detained in the old police department.

The police took turns interrogating him. When he refused to cooperate he was tortured and deprived of sleep. The police threatened to put him behind bars.

To protest the illegal arrest and torture, he went on a hunger strike. He became weak and emaciated and both his legs became swollen. The police brought in his sister and brother to try to get them to persuade Mr. Zhong to eat so they would escape any responsibility.

Mr. Zhong and his wife run a home clinic and their baby boy is just four months old. His mother, who lives with them, suffers from a severe heart problem. His arrest has put his family in a difficult situation.