Argentina: Chinese Diplomat Arrested After Forcing His Way Past the Police Cordon in Attempt to Disrupt Falun Gong Protest During Xi's Visit

(Minghui.org) A Chinese embassy official was arrested in Buenos Aires on July 19 for forcing his way past the police line in an attempt to disrupt a Falun Gong protest.

Local practitioners identified this man as the deputy military attache at the Chinese embassy. The man's diplomatic identity was confirmed by the Argentine police.

In the nearby Congressional Palace, Argentine Vice President Amado Boudou was meeting with head of Chinese Communist Party (CCP), Xi Jinping, who was visiting July 18 through 21.

Based on the previous day's experience, Argentine riot police made arrangements to keep local Chinese thugs associated with the Chinese embassy away from Falun Gong practitioners, in order to protect the practitioners' safety. The Chinese diplomat forced his way past the police cordon while leading a group of these thugs, and was subsequently arrested. 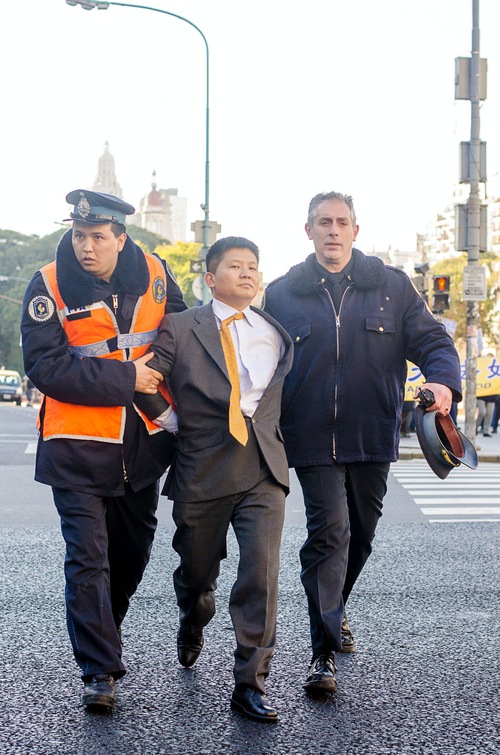 A Chinese diplomat was arrested on July 19, 2014, after forcing his way past the police cordon to disrupt a Falun Gong protest during Xi's meeting with the Argentine Vice President.

Falun Gong practitioners staged several protests during Xi's visit. They called for Xi to end the persecution of Falun Gong and bring the main perpetrators to justice. 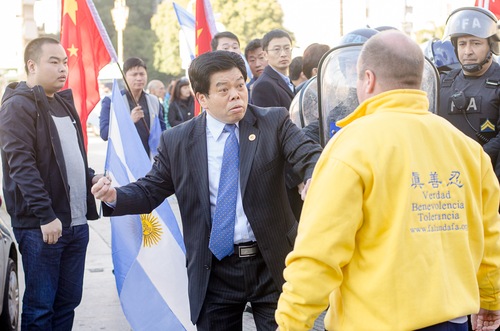 Local Chinese known to be closely associated with the CCP threatens a Falun Gong practitioner in Buenos Aires, Argentina, on July 19, 2014.

On the morning of July 18, practitioners unfurled their banners outside of the hotel where Xi was staying and started distributing informational materials that exposed the persecution in China. Thugs from the CASRECH (Chamber of Supermarkets and Self-Service Restaurants Owned by Chinese Residents in Argentina) and the Fujian Association, two groups closely associated with the local Chinese Embassy, showed up, too.

According to Ms. Fu, a representative of the Falun Dafa Association in Argentina, some of the thugs threatened practitioners, saying things like, “You won't be able to stay here [in Argentina] much longer.”

The thugs assaulted practitioners several times and tried to grab their banners. The police ordered the thugs to retreat to the hotel garage entrance and ignored their accusations, as the practitioners' banners were perfectly legal.

The police eventually contained the thugs near the garage entrance and allowed practitioners to continue to distribute materials.

Ms. Fu said that the Chinese diplomat arrested on the 19th was also present on the 18th. After the police saw how the thugs tore apart several banners, they called in armed police and lined up between the Chinese thugs and Falun Gong practitioners.

When Xi's motorcade was due to arrive, the Chinese diplomat gestured to the thugs, who then swarmed to snatch the yellow banners that said things such as “Falun Dafa is great.” They tried to shove their way past the police, who used batons to keep them away from the practitioners.

Just then, the motorcade arrived and slowed down. The practitioners held up their banners and responded to the assaults by shouting, “Falun Dafa is great.”

In the afternoon on July 18th, the police designated two police officers to escort practitioners to the location of their protest near the La Casa Rosada, the executive mansion and office of the President of Argentina.

The police ordered the Chinese thugs to keep their distance. Xi's motorcade again passed by practitioners' protest with banners such as “Stop persecuting Falun Gong.” 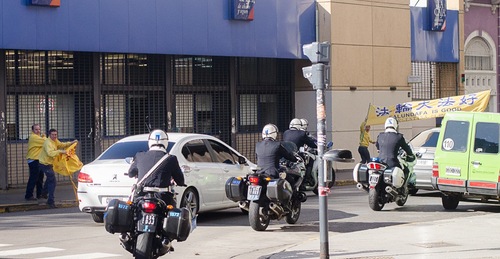 Argentine Falun Gong practitioners shouted “Falun Dafa is great” and "Bring Jiang Zemin, the instigator of the persecution, to justice" wherever the CCP officials' motorcade went. 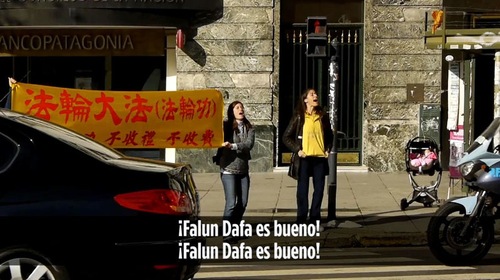 Practitioners shouted “Falun Dafa is great” and "Bring Jiang Zemin, the instigator of the persecution, to justice" wherever the CCP officials' motorcade went. 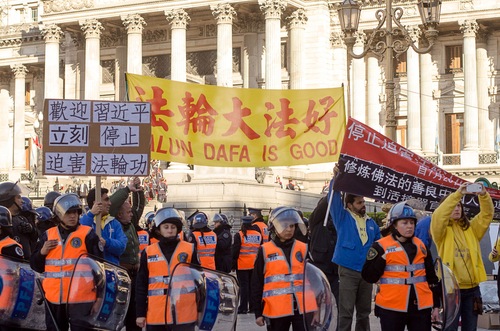 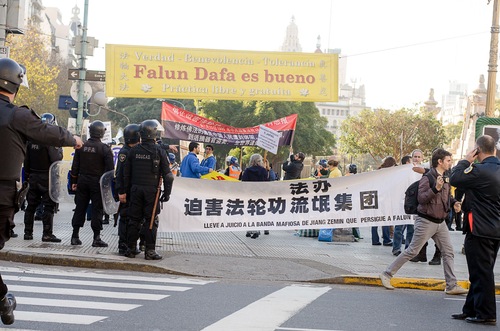 A protest site. The yellow banner says “Falun Dafa is great. Truthfulness-Compassion-Forbearance.” The white banner reads “Bring the perpetrators of the persecution to justice.”

This episode occurred as the persecution of Falun Gong in China approaches its 15th year, having been officially launched on July 20, 1999.

“The CCP official and hired thugs openly assaulted Argentine practitioners. This was unacceptable. If this is happening in Argentina, imagine how brutal the persecution is in China!” Ms. Fu said.

“Rally at the U.S. Capitol: “Our Collective Voices Can Make a Difference” – Speech by Congresswoman Ileana Ros-Lehtinen”

“Podcast (Health): “The Difficult Life of a Disabled Woman””