Montreal, Canada: Rally in front of Chinese Consulate to Protest the Persecution

(Minghui.org) Falun Gong practitioners held a rally in front of the Chinese Consulate on St. Catherine Street on July 17, 2014 to mark the 15th anniversary of peaceful resistance to the Chinese Communist Party's (CCP) persecution. They exposed the CCP's atrocity of live organ harvesting from persecuted Falun Gong practitioners and called for an end to the brutal persecution in China. 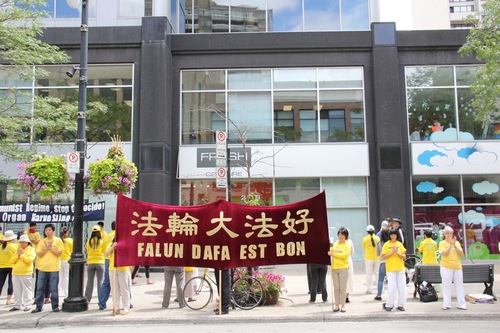 Falun Gong practitioners hold a rally in front of the Chinese Consulate in Montreal to mark the 15th anniversary of peaceful resistance to the CCP's persecution. 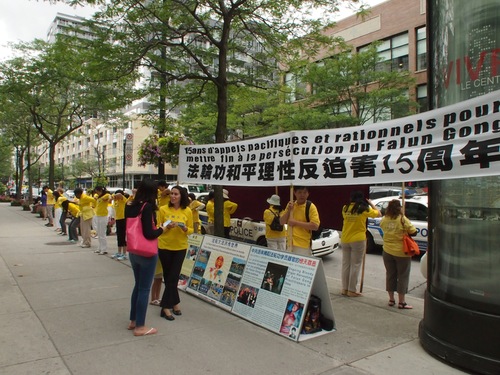 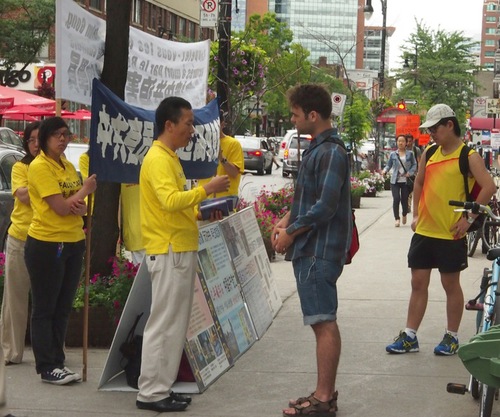 Exposing the CCP's persecution of Falun Gong to passers-by. 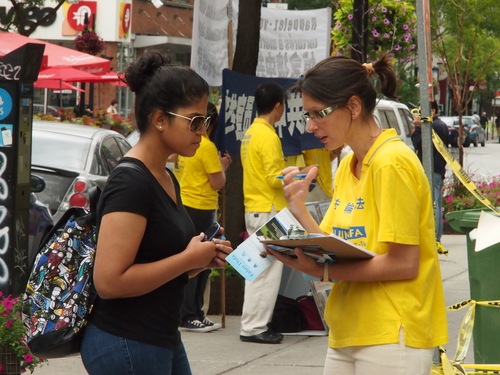 Practitioners demonstrated the exercises, which caught the attention of passers-by. A number of people came forward to ask for more information and many signed the petition to protest the CCP's live organ harvesting.

Experiencing the Persecution in China

Ms. Sun, from a small town in Northern China, experienced the persecution in China first hand. She recalled, “On July 20, 1999, the Party initiated the persecution of Falun Gong. One afternoon in 2000, I went to Beijing to appeal for Falun Gong. I was caught by police and imprisoned. I was beaten, abused and intimidated.” She shed tears while speaking, recalling her experience.

Ms. Sun continued, “I was frequently confined at home, monitored, followed and harassed on the many occasions that the Party thinks 'sensitive,' such as April 25, July 20, the Beijing Olympics, or during the Party's conferences.” Ms. Sun was fortunate to be able to come to Montreal in 2013 and put the harassment behind her.

Chinese People Renounce the CCP and Its Affiliated Organizations

A Chinese woman came out of the consulate and asked a practitioner for information about the rally. She expressed her support, but not openly. The practitioner introduced the world-wide movement of withdrawing from the CCP and its affiliated organizations. The woman agreed to renounce the Party on the spot.

Many Chinese students were attending class in a building next door to the consulate. During break, they came out to read the poster boards about a number of subjects, including the CCP-staged self-immolation incident [to frame Falun Gong], high level Chinese officials being sued in international courts and the Nine Commentaries on the Communist Party. Many of the young people accepted the Falun Gong informational materials from the practitioners.

Throughout the event, passers-by stopped to read the poster boards. Some said that they had not known about the atrocities before. After learning the facts, many signed the petition to stop the CCP's live organ harvesting.

A student from a nearby school stopped by and said that he frequently saw the practitioners' events. He said, “I think your events against the persecution are very peaceful. I cannot understand the Chinese regime's persecution. I feel sorry for the innocent practitioners who bring grace to people but suffer persecution.” He signed the petition against the CCP's live organ harvesting.

A woman named Dolores from Quebec talked with a practitioner at the rally. Dolores said, “I've heard of Falun Gong. I think it is beneficial to all people. Everyone should practice Truthfulness-Compassion-Forbearance. There is nothing wrong with that. I think that what is happening in China is terrible. It is good to collect signatures in Quebec. People are shocked when they see the poster boards, as they don't understand why such things occur in China.”