Senator John Madigan, Member of Parliament Craig Kelly and Professor Maria Fiatarone Singh from the University of Sydney spoke at the rally. MP Andrew Wilkie delivered a letter to the Australia Falun Dafa Association to voice his support for the rally. 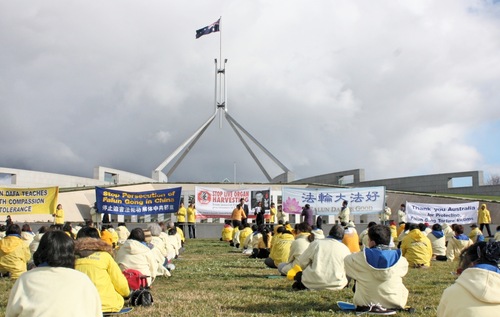 Falun Dafa practitioners from Australia hold a rally at Capital Hill in front of Parliament House. 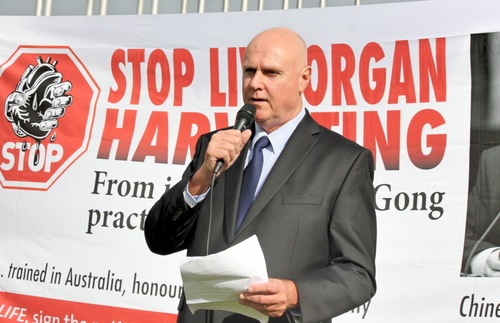 Support for Immediate End to the Live Organ Harvesting in China

Senator John Madigan and MP Craig Kelly are founders of Parliamentarians Against Forced Organ Harvesting (PAFOH). They arrived at the rally around noon and gave talks supporting the practitioners’ effort to call for an immediate end to the state-sanctioned organ harvesting in China. 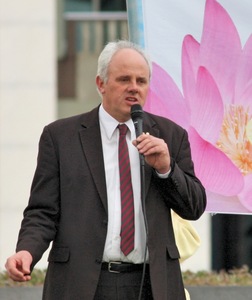 Senator John Madigan speaks at the rally to voice his support.

Senator Madigan expressed the hope that the Australian government could stand up and help stop the violent crime of live organ harvesting, “I hope that in the not-too-distant future that Australia condemns the illegal harvesting of organs, no matter where they are from. But we know from the evidence presented to us that China plays a big role in this immoral industry. We are not talking about commodities, we are talking about people.” 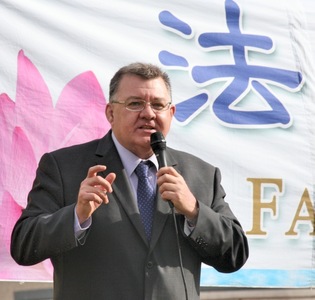 MP Craig Kelly told reporters at the rally that between 2001 and 2008, as many of 65,000 Falun Gong practitioners had their organs removed against their will.

He said, “Those numbers are too frighting to think about. Unfortunately we can't undo that, but we have to learn from it. … and [make sure that it] doesn't happen any more.”

Mr. Kelly stated that he would continue to bring up the issue in Parliament and that he also wants the media to pay attention to it. He believes that organ transplant tourism should be stopped. Mr. Kelly called for Australia to learn from the experience of countries that have already taken legal actions against it.

In a letter sent to the rally, MP Andrew Wilkie expressed his appreciation for Falun Gong practitioners’ persistent effort over the past 15 years to stop the persecution in China. Mr. Wilkie wrote, “Today’s rally commemorates 15 years since the Chinese Communist Party began waging their dreadful campaign against Falun Gong practitioners. Over the last 15 years, countless people have been killed and tortured, and many more have been detained in so-called 're-education through labour' camps.

“Human rights are essential in any society. Freedom of belief and freedom from persecution are among the most important of these human rights. For 15 years, the reports that have been coming out of China are shocking. These are appalling abuses to which Australians simply can’t turn a blind eye.”

Speaking from the angle of medical ethics and social responsibility, Professor Maria Fiatarone Singh of the University of Sydney presented a thorough analysis of the issue of organ harvesting at a hearing held on the same day. At the rally she promised to continue advocating within the medical profession for a stop to live organ harvesting and the use of illegally-acquired organs.

Professor Fiatarone Singh further encouraged Falun Gong practitioners to continue to appeal to their local representatives and ask them to further legislate on the protection of human rights and preventing Australians from unknowingly becoming accomplice to the illegal organ trade.

Falun Gong practitioner Ms. Zhang Fengying just came to Australia from Beijing this February. She was tortured in Tiantanghe Women’s Forced Labor Camp in Beijing from January to July 2013. During this period the authorities drew blood from her three times for different kinds of tests but she was never informed of the test results.

Practitioners Mr. Yu Manhua and Ms. Zhang Yong left Liaoning Province, China, and came to Canberra in June 2014. In 2002 they were arrested and taken to Masanjia Forced Labor Camp in Liaoning where they suffered torture including being injected with nerve damaging drugs. They were also forced to perform hard labor. Mr. Yu and Ms. Zhang reported that the authorities at Masanjia performed blood tests on Falun Gong practitioners there as well.

Practitioner Ms. Zhao Jingmin came from Beijing to Canberra on May 10, 2014. She was subjected to various tortures in detention in China. “Before I left, the situation in China had not yet improved. The Chinese authorities are still arresting Falun Gong practitioners. I hope the persecution will stop soon, including live organ removal from the practitioners,” said Ms. Zhao.

The peaceful protest that day impressed a number of Parliamentary Security Service officers assigned to oversee order during the rally. The commanding officer told the practitioners, “You are the best group ever.”

Senator Madigan also recognized the practitioners for the peaceful and orderly rally. He said, “I have to commend the Falun Gong people on the fact that you conduct yourself in a very peaceful, orderly manner. In your protest against the injustices that are being done to your fellow Falun Gong members, you never resort to anarchy or violence and that is to be commended.”

Professor Fiatarone Singh said that she has been in touch with many practitioners who were once tortured in China. She said that it was an incredible experience meeting with them. Not only because of the severe tortures they have suffered, but also because they have never shown a bit of hatred or desire for revenge. She said that the practitioners’ perseverance and dignity was very inspiring.

“Montreal, Canada: Rally in front of Chinese Consulate to Protest the Persecution”