(Minghui.org) For Chinese tourists in Taiwan, in addition to sightseeing and experiencing a different Chinese culture, learning about Falun Gong is also part of their unique opportunity. Falun Gong practitioners have maintained a regular presence in many tourist destinations to offer such facts to them. Fort Provintia, an ancient Dutch outpost built in 1653 in Tainan, the oldest city in Taiwan, is one such location.

In the past 11 years, every single day, practitioners are there to talk to Chinese tourists about Falun Gong. Through pamphlets and poster boards, they also provide detailed information of how the Chinese Communist Party (CCP) has misled people with brainwashing and brutality. 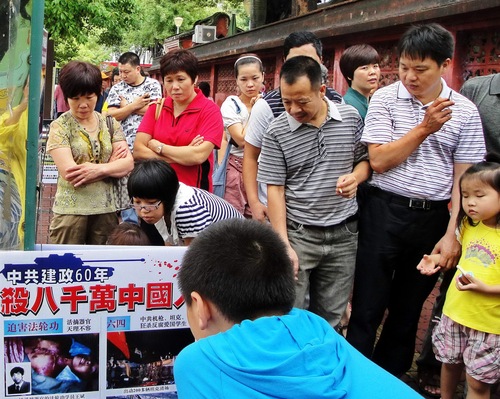 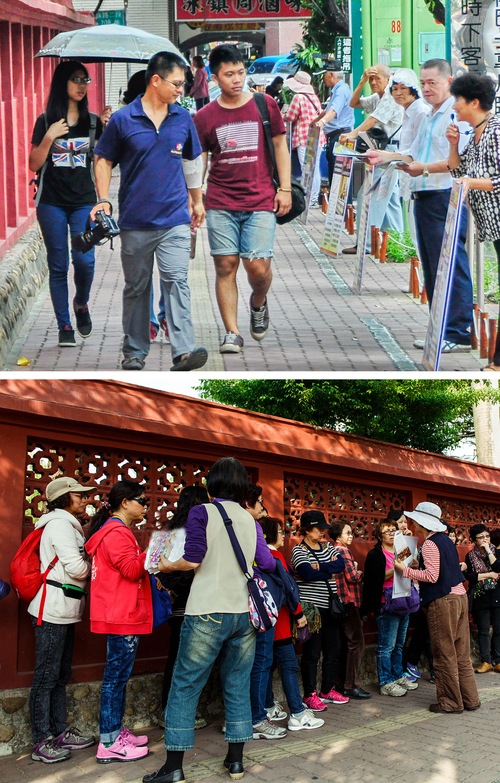 Practitioners have been clarifying the facts about Falun Gong at Fort Provintia in Tainan for the past 11 years. 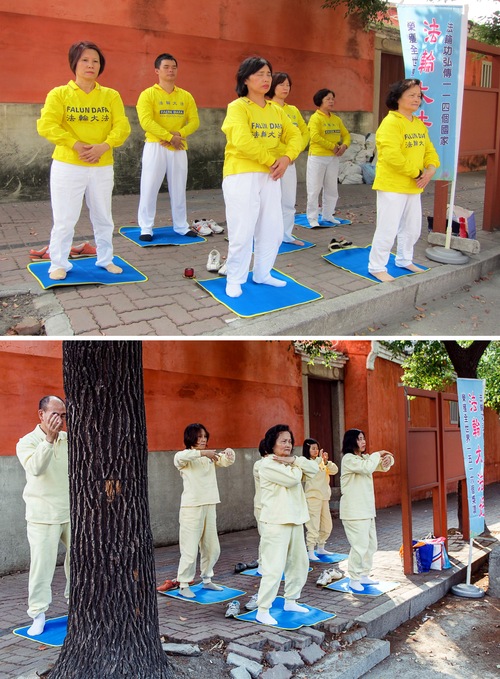 Falun Gong practitioners do the group exercises on weekends and during holidays.

Ms. Zheng, a practitioner who started practicing 16 year ago in Mainland China, moved to Tainan with her husband over 10 years ago. She makes a lot of efforts explaining the facts about Falun Gong to Chinese people, both over the phone and at tourist sites. 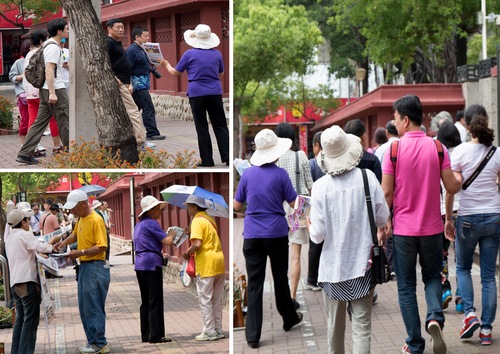 Ms. Zheng said that she wasn't tired of coming to the site daily: “I usually speak to them when they enter the historic building, or when they return to the bus.”

“I do not want to miss any of them. They have traveled a long distance to come here. This might be the only opportunity for them to learn the facts,” said Ms. Zheng.

With a small speaker in her hand, Ms. Zheng often walks with the tourist groups. She isn't deterred by the fact that quite a few tourists initially don't dare to accept materials or even look at the display boards because they have been brainwashed by the CCP propaganda. She believes that the facts can clear away the negative influence of the propaganda and allow these tourists a chance to think independently.

After she clarifies the facts, she usually asks the tourists if they have understood her. Some said, “I understand it now; please help me quit the CCP.” Some were anxious to know more, “Could you explain this to me further?” Ms. Zheng often gives them a copy of software tools to circumvent the internet blockade in China.

After the tourists get on the bus, some open the materials and begin to read, while some continue reading the headlines on the display boards. As the buses leave, many Chinese tourists wave goodbye to Ms. Zheng.

Ms. Zheng occasionally takes a nap on the bus back home. “It's hard work,” she said, “but it’s worth it.”

Ms. Zheng also provides other assistance to tourists when needed. Once the Fort Provintia building was closed due to a typhoon. The tourists had nowhere else to go because their travel schedule couldn't change. She showed them around, telling them about the historic site and culture, as well as the popularity of Falun Gong in Taiwan. “The tourists were very interested and they listened attentively. In the end, they thanked me several times and almost all of them quit the CCP, including the group leader.”

After years of hard work, Ms. Zheng is gratified to see so many Chinese people learning the facts. With her help, nearly 10,000 people have renounced their membership in CCP organizations. 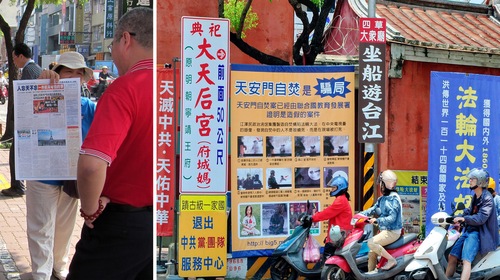 Retired teacher Caifen (left) pays for the banners and display boards out of her own pocket and has been at the Fort Provintia truth-clarification site for the past 10 years.

Caifen, a teacher who retired in 2003, has been supporting this site for the past 10 years. She pays for the banners and poster boards out of her own pocket.

As one of the coordinators, Caifen has to work together with local police. When there is some confusion or misunderstandings, she has to address them. “We are following the principles of Truthfulness-Compassion-Forbearance. That is why we are able to get along well with police and tour site security.”

One example is a deputy chief from the local police station. That officer became very supportive after he heard the facts about Falun Gong. He was later promoted and moved to another district. When coming back recently on a different assignment, the officer was very surprised to see the practitioners again, at the same place. He said, “I really admire your persistence.”

Such comments are common from local officers. One police officer has been working in the local area for 10 years. Even at the beginning, he knew that practitioners came here to tell tourists the facts about Falun Gong, as well as the brutal persecution in China. “At that time, I was not sure how long you could continue volunteering like this without external financial support.” said the officer to one practitioner.

Seeing practitioners doing this consistently for nearly 11 years, the officer was impressed. “It's amazing that you have kept doing this for such a long time. Plus, more and more [volunteers] have joined. You are superb.” said the officer.

Tour Guide: If You Are Lost, the Falun Gong Booth Will Show You the Way

Ms. Yu, a retiree from the financial industry, found her work experience helpful when she talks with tourists. “It requires patience and good listening skills.” said Ms. Yu. Some Chinese people were willing to accept the facts, while some have some resistance due to hate propaganda by the CCP. By remaining calm and offering thoughts from their heart, Ms. Yu and other practitioners volunteers were able to gain the Chinese tourists' trust.

Good communication with local residents is also needed. Seeing more and more poster boards on display, Fort Provintia building security requested them to move out of the building. Finding a storage place for the boards during the night became a challenge. “We asked for help from a temple across the street.” said Ms. Yu.

The temple is a place for local residents to worship an ancient deity, who is believed to bring people good fortune. The temple's management committee said they had to ask the deity for instructions during prayer, a ritual that had been followed generation after generation.

“Pretty soon we heard back from the committee.” Ms. Yu said. “They told us that their deity had been in favor of helping us with storing the display boards.”

Just like local residents, tour guides working for various travel agencies in Taiwan also had misunderstandings in the beginning. “Gradually they came to know that we are here simply to raise aware of the brutality, and call for an end to the persecution against the innocent.” said Ms. Yu. The booth is now widely respected in the local community. “Many people give us a thumbs-up when walking past our booth and tell us, ‘Good job!’”

The tour guides are also supportive. After learning about Falun Gong themselves, the tour guides often recommend the materials to tourists. One of them says to his tour groups, “You can trust these people [Falun Gong practitioners]. If you are lost, the Falun Gong booth will show you the way.”

One tour group was from Yunnan Province. All of the group members, teachers and students, were from the Miao ethnic group. “After we talked to them, the entire group quit the CCP and its affiliated organizations.” said Ms. Yu. Upon leaving, they offered a folk dance to us to express their gratitude and said, “Falun Gong is great!”

“Not everyone is willing to quit the CCP,” said Ms. Yu, “even after we told them all the facts. I am worried about their future.”

“I Just Wish You a Safe Future”

Lily is another practitioner who volunteers at the booth. Having practiced Falun Gong for 8 years, she was thankful for the benefits she had received, both mind and body. “I feel it is my responsibility to tell Chinese tourists the real story of Falun Gong. They need to know the bad deeds that the CCP has committed. If one aligns himself with the party, he is doomed for destruction.”

Not every tourist could understand Lily. As she explained things in her kind, humble voice, some accepted her words, while others reacted with hostility, “How much money do you make by working here and telling me this?”

Lily always smiles back and replies gently, “I do not make a penny. I am a volunteer and I just wish you a safe future.”

“Mr. Kang Youyuan from Wuhan Detained for Over Three Months for His Belief”