(Minghui.org) During head of the Chinese Communist Party (CCP) Xi Jinping's visit to France in March, the Paris Administrative Court decided that the police's refusal to allow the practitioners' rally in front of the Chinese Embassy was “a serious and obviously illegal breach to freedom of demonstration and expression.” 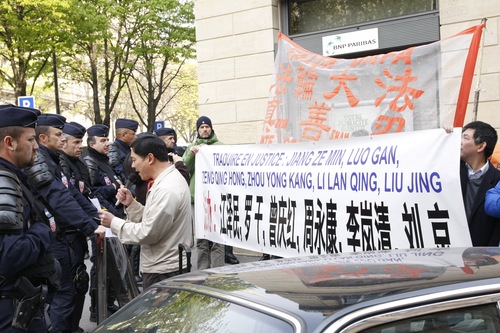 Falun Dafa France held a rally in front of the Chinese Embassy in Paris on March 27, 2014, as scheduled. 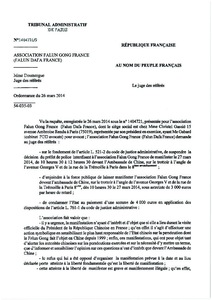 First page of the verdict of the Paris Administrative Court 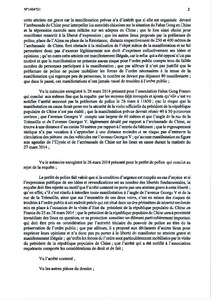 Second page of the verdict 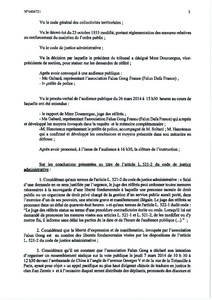 Third page of the verdict 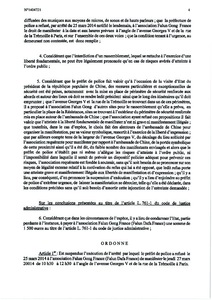 Fourth page of the verdict 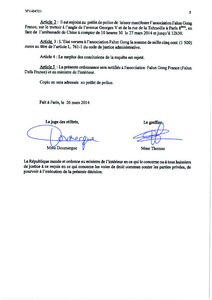 Falun Dafa France planned a peaceful demonstration in front of the Chinese Embassy on March 27 to call for an end to the persecution in China and applied for a permit accordingly. In the morning of March 26, the Association received a refusal from the Prefect of Police in Paris, and was offered alternative rally locations several hundred meters away from the Chinese Embassy.

In the verdict, the judge acknowledged that the practitioners' choice of location, the Chinese Embassy, for its symbolic value, “falls within the exercise of freedom of expression.”

Furthermore, it contended that “forbidding a rally, which is linked to the practice of a basic freedom, can only be legally delivered in case of proven risk of breach of public order.”

“The applicant association is entitled to support,” rules the verdict, given that “the Prefect of Police does not ascertain nor claim the risks of disturbing public order, nor the impossibility of planning an adequate police presence to prevent these risks.”

Below is the English translation of the verdict. It was delivered to Falun Dafa France Association, Minister of the Interior and Prefect of Police in Paris.

- on the basis of Article L. 521-2 of the Code of Administrative Justice, to suspend the implementation of the Prefect of Police's decision prohibiting the demonstration of the Association of Falun Gong France (Falun Dafa France) scheduled for March 27th, 2014, from 10:30 AM to 12:30 PM in front of the Chinese Embassy, on the sidewalk at the corner of George V Avenue and Trémoille Street in the eighth district of Paris

- to require law enforcement to permit the demonstration of the Association of Falun Gong France (Falun Dafa France) in front of the Chinese Embassy, on the sidewalk at the corner of George V Avenue and Trémoille Street in the eighth district of Paris, from 10:30 AM on March 27th, 2014 under the penalty of 3,000 euros per hour of delay

- to condemn the State to pay the sum of 4,000 euros in order to comply with the dispositions required by Article L.761-1 of the Code of Administrative Justice;

The Association argued that:

- this infringement on the fundamental right to demonstrate is serious and obviously illegal; and that is, in effect, a serious infringement, because the scheduled demonstrations are only of value if organized in front of the Chinese Embassy, so as to draw attention of the Chinese authorities on the Falun Gong situation in China and of the ongoing relentless repression of its followers in China; that the place thus chosen to demonstrate pertains to the fundamental right of freedom of expression; that the other sites proposed by the administrative offices of the Paris Police Department, the Place de Alma and/or Place de la Résistance, of distances of 250 to 400 meters respectively from the Chinese Embassy, hinder the purpose itself of the demonstration and does not permit the legitimate right to express collectively one's ideas and opinions; furthermore, this infringement is obviously illegal. Because the rejection that was made was not motivated, and furthermore, the demonstration did not present any risk to public order, considering the small number of people who would be participating in such a demonstration; and moreover, it is not justified to contend that the Police Department could not mobilize enough police officers to sustain peace and order in a small demonstration with few participants, the number of which would not exceed 80 demonstrators; that in the past, these demonstrations have never caused any trouble to the public order.

Having seen the brief on March 26th, 2014, presented on behalf of the Falun Gong Association of France with the same conclusions as the claim through the aforementioned arguments and having seen that it had received a notification of the rejection order issued by the Police Department on March 26th, 2014 at 11:30 AM; and that the risk of said demonstration would weigh upon the security planned for the official visit of the President of the Chinese Republic, is not established; that the demonstration anticipated approximately 40 to 50 persons; that George V Avenue measures 40 meters and that the corner of Trémoille Street and George V Avenue slightly in retreat of the Chinese Embassy, is situated at a distance of 50 meters from the entrance of the building; that the static gathering has no reason to advance any closer and does not risk to hinder the circulation of passers-by and/or traffic on George V Avenue; that no events are scheduled on the planning of the Elysée and the Chinese Embassy on said sites during the morning of March 27th, 2014.

Having seen the brief of March 26th, 2014 presented on behalf of the Prefect of Police that concluded to reject the application;

The Prefect of police argued that if the condition of urgency is satisfied in this kind of cases and if public expression of ideas and demands are among fundamental liberties, the claim must then be rejected on the grounds that the contested order does not pose a severe violation to this freedom; that in fact, if it decides to ban all demonstrations at the corner of George V Avenue and Tremoille Street as well as on all of those two routes, it is because of the risk of public unrest at that precise spot situated within the perimeters of reinforced security measures for the visit of the President of the Chinese Republic to France from March 25th to March 28th, 2014; that the President of the Chinese Republic would be in the immediate proximity of said sites, and his protection is a factor of the utmost importance that the authority owning the police power should consider by the name of maintaining the public order; furthermore, other places were offered to the claimants; that finally, the police forces are especially mobilized for the visit of the President of the Chinese Republic; that the notification of the Order sent to the claimant association indicated all legal and factual considerations ;

Having seen the contested ordinance;

Having seen the annexes in the case file;

Having seen the Decree-Law modified on October 23rd, 1935 on regulation of measures related to the maintenance of law and order.

Having seen the Code of Administrative Justice.

Having seen the decision by which the President of the Court appointed Mme Doumergue, vice-president of section, to determine the application for interim relief ;

After calling for a public hearing:

- The report from Mme Doumergue, Interim Relief Judge- Me Gabard, representing the Association of Falun Gong France (Falun Dafa France) took up again and expanded on the pleas raised in the application and the additional statement.- M. Hanoteaux representing the Prefect of Police, escorted by M. Soltani; M. Hanoteaux confirmed and expanded on the conclusion and pleas presented in his statement of defense.

After declaring the investigation closed at the end of the hearing at 4:30 PM;

On the conclusion presented under Article L.521-2 of the Code of Administrative Justice:

1. Given that Article L.521-2 of the Code of Administrative Justice: “In a case of urgency the interim relief judge may, if so requested, make any order necessary to protect a fundamental freedom which could be the subject of a serious and obviously illegal invasion by a Legal person governed by public law, or an organization governed by private law in charge of managing a public service, in the exercise of its powers. The interim relief judge will hand down a decision within 48 hours.” And that under Article L.522-1 of the same code: “The interim relief judge rules following written or oral proceedings in which both the charges and the defense are heard. When asked to decide on matters covered by Articles L.521-1 et L.521-2, to amend or terminate them, he shall immediately notify all parties of the date and time of the public hearing (...)”;

2. Given that freedom of expression and peaceful demonstration referred to by the Falun Gong Association are among the fundamental freedoms listed in provisions of Article L.521-2 of the Code of Administrative Justice;

4. Given that forbidding a rally, which is linked to the practice of a basic freedom, can only be legally delivered in case of proven risk of breach of public order;

5. Given that the Prefect of Police argues that during the State visit of the president of the People's Republic of China, special and exceptional security measures were taken, including putting up a tightened security perimeter in the vicinity and around the places where this president needs to go to as well as along the itinerary that he needs to use; that Georges V avenue and Trémoille street are within one of these perimeters, he suggested other areas for the intended rally to the Falun Gong Association, in particular Place de la Résistance, sites located outside the tightened security perimeter put up around the Chinese Embassy; that the association having refused these propositions he argues that the infringement of the fundamental freedom to protest is neither serious nor obviously illegal; that however, in the present case the choice of the surroundings of the Chinese Embassy to organize the protest, by its symbolic value, which falls within the exercise of freedom of expression; that considering however the width of Georges V avenue, the shift of the requested location by the applicant association to protest in relation to the Chinese Embassy, the symbolic significance of this proximity as mentioned, the small number of anticipated demonstrators and since the Prefect of Police does not ascertain nor claims the risks of disturbing public order, nor the impossibility of planning an adequate police presence to prevent these risks, the applicant association is entitled to support, with no need to decide if there was external legal means related to the reason of refusal; that the same refusal is a serious and obviously illegal breach to freedom of demonstration and expression; that therefore the suspension of the execution needs to take place; that the Prefect of Police needs to be enjoined with utmost urgency to let the protest happen as declared in the above terms without needing to combine with the requested penalties;

On the conclusion presented under Article L. 761-1 of the Code of Administrative Justice:

Given the circumstances of the case, the State, the losing party to the proceedings, must be ordered to pay to the Association of Falun Gong France (Falun Dafa France) a sum of 1,500 euros under L. 761-1 of the Code of Administrative Justice;

Article 1: Suspends the execution of the ordinance, whereby the Prefect of Police denied the demonstration of the Association of Falun Gong France (Falun Dafa France) on Thursday, March 27th, 2014 from 10:30AM to 12:30PM at the corner of Georges V avenue and Trémoille street in Paris.

Article 2: The Prefect of Police is enjoined to let the Association of Falun Gong France protest on the sidewalk on the corner of Georges V avenue and Trémoille street in Paris in front of the Chinese Embassy from 10:30AM to 12:30PM.

Article 3: The state will pay a sum of one thousand five hundred (1,500) euros under Article L. 761-1 of the Code of Administrative Justice.

Article 4: Dismisses the remainder of the claims in the application as unfounded.

Article 5: The present order will be notified to the Association of Falun Gong France (Falun Dafa France) and to the Minister of the Interior.

A copy is to be sent to the Prefect of Police.

The Republic orders the Minister of the Interior, to the extent of his responsibility, or all bailiffs, following the procedures of ordinary law against private parties, to provide for the execution of this decision.