Ms. Zhao Shuzhi, 56, a Falun Gong practitioner from Moqi City, Inner Mongolia, was arrested again on March 29, 2014, because of her spiritual belief. Su Xiaoming and other officers from the Nierji No. 2 Police Station in Moqi arrested Ms. Zhao, her seventh arrest in 14 years. She is currently being detained at the Moqi Detention Center.

Ms. Zhao has been arrested and tortured many times since the persecution of Falun Gong began in 1999, and the latest arrest follows on the heels of an illegal incarceration that saw her detained at the Hohhot No. 1 Women's Prison from December 2005 to January 2009.

Prior to her imprisonment, local authorities tried to lock her up on numerous occasions, but she was denied admission to labor camps twice after failing medical exams. The one time Ms. Zhao was admitted, she was released soon after becoming ill from torture.

Ms. Zhao was held once at a local detention center as well. Another time she was held at the house of a 610 Office agent.

Moqi's 610 Office, the Domestic Security Division, the local courts, and the Procuratorate have all participated in persecuting Ms. Zhao.

Ms Zhao was arrested for the first time on November 20, 2000, by officers from the Moqi Domestic Security Division, the Police Department, and the 610 Office. Her home was ransacked and many personal belongings were confiscated.

While at the Moqi Detention Center, Ms Zhao remained steadfast in her belief and began to meditate. Li Zhanying, captain of the detention center, ordered Wang Zhongfu (a guard, now deceased) to shackle Ms. Zhao's ankles and affix a metal rod between the shackles, so that her legs remained immobilized and split apart (see re-enactment photo below). 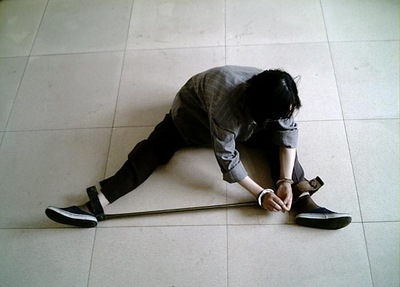 When another practitioner, Ms. Zhao Yingqin, tried to stop Ms. Zhao's torture, Li had her shackled the same way. Both practitioners held hunger strikes to protest their mistreatment, and were force-fed brine by inmates and Yi Shimin, a doctor at the detention center. They were not released from the shackles until they had been on a hunger strike for seven days.

Ms. Zhao went on several hunger strikes in protest of her mistreatment, and to demand her unconditional release.

Six other practitioners, including Zhao Shuzhi, Zhang Quan, Zhang Yiqun, Zhao Yingqin, Nie Lianhui, and Wu Yan, meditated together in January 2001. The detention center guards ordered inmate Wang Dianhai to shackle the six practitioners together, connected to each other with metal rods.

Ms. Zhao was released in September 2001, after Zhang Shibin of the Moqi 610 Office extorted 3,000 yuan from her family.

Second Arrest: Tortured to the Point of Being in Critical Condition

Ms. Zhao went to visit her relatives in January 2002, away from Moqi, without notifying the local police station. Zhang Shibin and some other officers arrested her, using the excuse that she had failed to notify the authorities. Ms. Zhao was held at the detention center for four months and then sentenced to three years in the Tumuji Forced Labor Camp.

She was tortured to the point of being in critical condition at the Tumuji Forced Labor Camp in March 2003. The officials then ordered her family to take her home.

Ms. Zhao was arrested on October 30, 2003, after an informant named Cui Guihua reported that a small-scale experience sharing conference was being held by local Falun Gong practitioners that same day. Ms. Zhao and many other practitioners, including E Yuxia, Yuan Yanbo, Zhou Yuchen, Yang Wenhua, Guo Juhua, Ao Ronghua, Xu Dongmei, and two drivers (non-practitioners) were arrested. They were taken to the Moqi Detention Center.

Following four and a half months at the detention center, Zhang Shibin sentenced Ms. Zhao to three years in the Tumuji Forced Labor Camp. She was released after she failed a physical examination administered by the labor camp hospital.

In April 2004, Zhang Shibin and other officers broke into Ms. Zhao's home and arrested her. Zhang then tried to have her placed in the Tumuji Forced Labor Camp. He even bribed the camp's political commissar, but the camp refused to accept her. Zhang then sent Ms. Zhao back home that evening.

Ms. Zhao went to visit another practitioner, Ms. E, in November 2004, after Ms. E was released from the labor camp. As soon as Ms. Zhao entered the house, a group of officers from the No. 2 Police Station broke in and arrested both women. The practitioners were then taken to Zhang Shibin's house. There, the police subjected them to brainwashing and torture, and tried to force them to renounce their beliefs.

Ms. Zhao went on a hunger strike in protest, so a nurse showed up to help force-feed her. The guards and the nurse tied Ms. Zhao's hands behind her back and shackled one of her legs to the bed. In tremendous pain, Ms. Zhao found it impossible to fall asleep and struggled throughout the night. During the struggle, the tube was ripped from her nose and blood sprayed all over the wall.

On September 13, 2005, Zhang Shibin noticed a large number of truth clarification pamphlets in Moqi Square and also around his house. He then decided to set off a new round of arrests of Falun Gong practitioners.

Zhang and some officers from the No. 3 Police Station in Moqi broke into Ms. Zhao's home and ransacked it. They arrested Ms. Zhao and some other practitioners, and Ms. Zhao was taken to the Moqi Detention Center.

Chang Jinghua, captain of the detention center, along with guards Wang Zhongfu and Du Yulin, encouraged the inmates to physically abuse the practitioners. The inmates did so in a number of ways, including dousing their heads with urine.

Ms. Zhao was tricked in December 2005. Judge Haiqing said to Ms. Zhao, “If you sign this document, we can provide you with medical parole.” Ms. Zhao did not recognize the trap and signed the document. A few days later, the Moqi court (under the direction of Zhang Shibin) sentenced her to four years in prison.

Ms. Zhao was then taken to the Hohhot No. 1 Women's Prison and sent directly to a group specifically purposed to “transform” the most steadfast Falun Gong practitioners. She was not released until January 2009.