Part two discusses the depth of the persecution. In addition to direct forms of physical abuse and torture, the Chinese Communist Party (CCP) officials manipulate friends and family of practitioners, create enormous financial pressure, and use every other means at their disposal to try to crush the practitioners' wills.

Located in Xinjin County, Chengdu City, Sichuan Province, this brainwashing center is officially known as "Chengdu Legal Education Center." The center is now being renovated, and it has been said that the authorities appropriated 10 million yuan for the project. The center was established by the Sichuan 610 Office and Chengdu 610 Office in 2003.

The center has many departments with detailed divisions of responsibilities. The key sector is the Political Instruction Department, which is in charge of "transforming" practitioners. The office also works with police in pressuring "transformed" practitioners to turn in others.

Yin Shunyao was formerly the director of the Political Instruction Department. The current director is Bao Xiaomu. Zeng Ke is the liaison officer of the local police department. 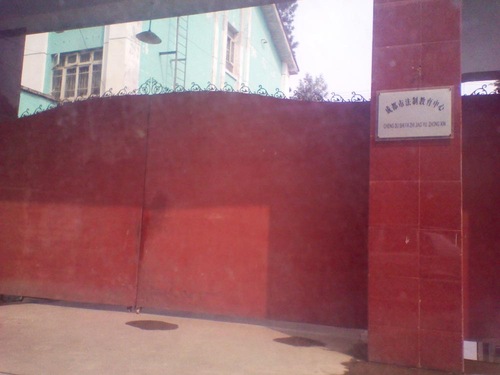 According to the Chinese Constitution and Legislation law, any restriction of personal freedom requires approval by national laws. However, despite its illegitimate status, the center has held about 1,000 practitioners since its operation commenced in 2003. The detention terms often range from several months to several years, sometimes up to 7 years.

Detainment in brainwashing centers violates the United Nations' “Code of Crimes against the Peace and Security of Mankind” and other international laws. The scale and scope of the mistreatment has made it a crime against humanity.

Sadly, officials at Xinjin Brainwashing Center are not aware that what they are doing is illegal. Bao Xiaomu has often told detained practitioners: “There is no way for you to leave here without giving up the practice of Falun Gong. We have seen this same situation many times.”

There are certain regulations in place for general detention centers and prisons. These rules are usually enforced by law enforcement officers, and the families of the detained can expect to receive some sort of written notice. Detainees and their family members are also allowed to hire attorneys to appeal on their behalf. Even the recently abolished labor camp system had a process of review, approval, and appeal.

In contrast, however, brainwashing centers have no such requirements. Officials are able to detain practitioners at will and without any legitimate reason or written notice. The visitation rights of family members are also fully controlled by officials, and visitation requests are often denied. When officials think that a visit will help to "transform" a practitioner, however, requests to visit quickly granted; sometimes family members are even forced to stay with the detained practitioners at the center.

The ultimate goal of the brainwashing center is to force practitioners to give up their beliefs, and all the center's operational capacities are focused on this main objective.

Most of the brainwashing center staff understand that everything they force upon practitioners is propaganda. Yet, enticed by material interests—salaries and bonuses—they chose to act against their consciences.

The first step is usually forcing practitioners to lie about their true feelings. This step involves promising their release and return home upon writing certain statements relinquishing their beliefs. After this step is taken, staff members then pressure practitioners to slander the beliefs they once held—that is, fully accepting the brainwashing without reservation. The third step is getting practitioners to turn in fellow practitioners.

Step by step, officials lead practitioners down a path of no return.

Ironically, officials then require the practitioners to write thank you letters to the center officials and other staff members for “setting right” their minds and souls.

Colluding with Other Agencies to Intensify the Persecution

According to Yin Shunyao, the brainwashing center operates under the supervision of multiple agencies. Although it reports to the provincial and city-level 610 Office, the center works closely with other centers and upper level officials.

Such a network allows police to monitor practitioners more closely in extending the persecution. For example, Bao Xiaomu, Yin Shunyao, and other center employees members all visited Yangmahe Prison in the past, helping the prison "transform" practitioners and deciding which practitioners to send to brainwashing centers when their prison terms expired.

One example was Mr. Yuan Bin, a middle school teacher in the Longquanyi District of Chengdu City. After being incarcerated in Wumaping Prison for 8 years, officers from the local Political and Legal Affairs Committee secretly sent him to the brainwashing center on July 27, 2013, even though at the time of his transfer, his family members were waiting outside of the prison for his release.

Brainwashing centers are now being used in place of forced labor camps in the persecution of Falun Gong. This trend is identified in an analysis by Minghui and a December 2013 Amnesty International report.

Furthermore, new torture methods are being used in brainwashing centers, especially the use of psychotropic drugs. These drugs cause practitioners to lose awareness and their willpower, enabling the authorities to coerce them into signing statements renouncing their belief in Falun Gong.

The labor camps may be closed, but Falun Gong practitioners are now being transferred to prisons or brainwashing centers, a type of "black jail" with a track record even worse than the labor camps.

It is imperative that all persecution facilities, including brainwashing centers, be abolished immediately.

“Frequent Transplants of Organs from Unverified Sources Not Uncommon in China”