Wuppertal, Germany: Artworks Win Accolades and Touch the Hearts of Many

(Minghui.org) The Art of Zhen, Shan, Ren (Truth, Compassion, Forbearance) International Exhibition was held at the landmark City Hall in Wuppertal, a city in western Germany, on December 13 and 14, 2014. The exhibition consists of exclusively of works of art made by Falun Gong practitioners.

Many people were shocked by the brutality of the persecution of Falun Gong in China. From writer to physician, from painting artist to politician, they all expressed their hopes that the suppression would swiftly end. 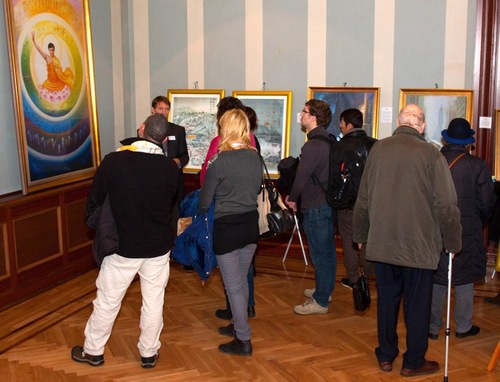 The Art of Zhen, Shan, Ren International Exhibition held in Wuppertal, Germany on December 13 and 14, 2014

Theatrical painter Annette Schwebs said her impression of these paintings was unprecedented, “As a painter, I appreciate the exquisite skill shown in these artworks, as well as their profound inner meanings.”

“For example, the painting Organ Crimes illustrates brutality against innocent people. It is a great artwork, well presented and very expressive.” “Looking closely, however, we can find messages on a deeper level. We could sense the humanitarian side of what was happening—something really touched me.”

“Here I Have a Feeling of Going Home”

Detective novelist Detlef Alsbach said he learned through a pamphlet several years ago about the live organ harvesting from Falun Gong practitioners in China. He conducted an in-depth investigation on his own and wrote the book of Verfolgte Herzen (Persecuted Hearts).

“Nowadays there are very few things in this society that highlight moral values. This exhibition showed me a path, and here I have a feeling of going home. ” He said the painting that impressed him the most was An Orphan's Sorrow. “It was a a little girl holding her parents' ashes after they were killed for their belief. The sadness in the painting really touched my heart.” 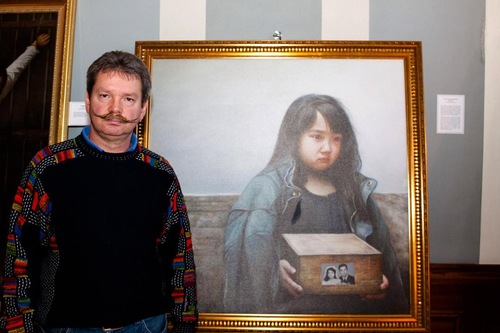 Civil engineer Sofia Revutskaja is almost 80 years old. “My elder brother came to the exhibition yesterday. He told me about it, so I am here today with my younger sister.” Revutskaja said she was fortunate to attend this exhibition because, “What I saw and what I heard today will change my life. In the past I did not know there was such a belief system such as Falun Gong, and that people could take such a path in their life.”

Revutskaja said she was no longer a follower of communism. For those who suppressed Falun Gong, she said, “I would like to tell them that, you cannot do things like this [persecuting practitioners]--it is simply too bad. These practitioners are good, innocent people. They are wronged by the communist party.” 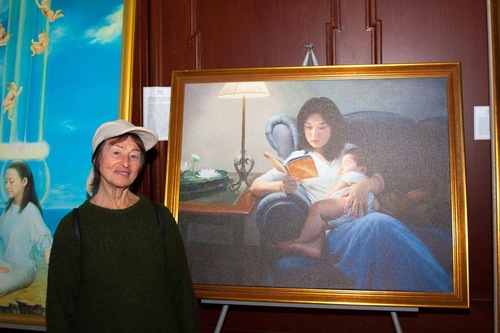 “What Kind of Life Do We Want to Live?”

A politician named Bialas said he was impressed by the artworks, “What we saw here are practitioners' sufferings. From them we are able to relate to those who caused them to suffer. One question we can ask ourselves is: exactly what kind of life do we want to live?”

“The painting that touched me the most was Homeless. It showed us a little girl who, upon returning home from school, found her home was barred by officials. This child is in deep sorrow because she has no place to go, since her parents were detained or imprisoned.”

“Beyond that, there is also a deeper, underlying question. That is: if a person's freedom of thought or self-judgment is deprived, what does it mean to our young generation?” 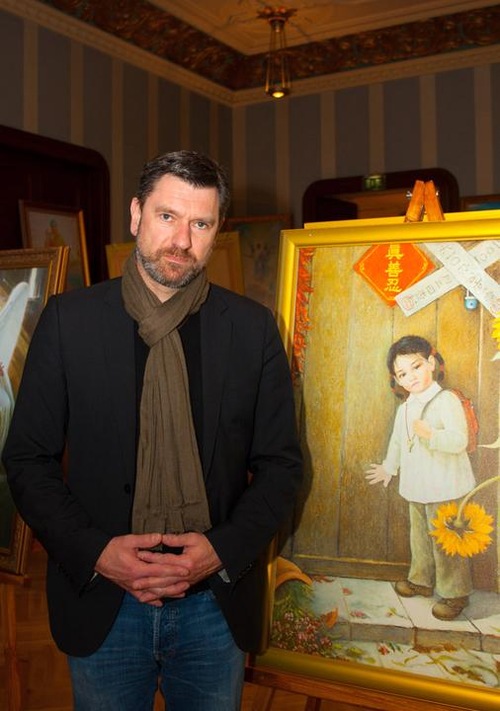 Mr. Bialas and painting of Homeless

“The Persecution Must End Immediately”

Kiesebrink, a lady working in Düsseldorf city government shared her understanding of A Tragedy in China, “Here is a young woman sitting next to her husband, who had died as a result of forced brainwashing. This is a tragedy. To be honest, I have to admit that, despite her loss and suffering, the lady has a strong inner strength. It is so powerful that it can conquer anything.”

Other paintings, including those depicting organ harvesting from living practitioners and children whose parents were killed for their belief, also stuck Kiesebrink deeply. “Without any doubt, the persecution must stop immediately.”

“It Is State-sanctioned Murder”

Mr. Schlechter, a physician, said he was drawn to these paintings not only for their artistic values, but also it the weight they carried. “Harvesting organs from living people for profit, when it is driven by those who are holding power, it is state-sanctioned murder.” As a physician, he was even more disturbed by such tragedies.

“Take this one—Determination under Persecution—as example, this young woman is handcuffed in the back and hung up, with several bricks hung from her neck. How could anyone do this in the civilized society? Whoever does this cannot be considered human being anymore. I want to ask that person: will you do this to your wife, to your child, or to your friend? Or, how would you feel if someone does this to you?!”

“Taiwan Says “No” to Importing Organs for Transplant from China”