Three Illegally Tried and Sentenced at a Brainwashing Center

The brainwashing center is an extralegal detention facility designated to coerce practitioners to abandon their belief in Falun Gong. It is controlled and managed by the Anshan City Political and Legal Affairs Committee and the city's 610 Office, a Party-based security organization in charge of the nationwide persecution of Falun Gong.

The Tiexi District Court rejected the case on May 23, 2014, on account of lack of evidence. According to legal procedures in China, the Tiexi District Police Department should have released the practitioners after the court's rejection.

On September 27, the three practitioners were told that they would be released on bail. However, when they stepped out of the Anshan Detention Center, they didn't see their family members waiting for them. Instead, city 610 Office staff took them to the brainwashing center immediately.

Three days later, they were secretly tried and sentenced.

The practitioners are now under intense pressure to renounce their belief. They are locked up separately with a guard at the door. Xie Yongfang, head of the 610 Office, announced that they would be released as soon as they wrote statements renouncing their practice of Falun Gong. Xie brought the practitioners' family members to the brainwashing center to pressure them around the clock.

The local neighborhood committee assigned personnel to participate in the brainwashing. One of them, whose last name is Bai, spends an hour each day in the practitioners' cells trying to coerce them to give up Falun Gong. On September 29, Bai tried to force the three practitioners to stomp on an image of Falun Gong founder but they firmly refused.

The practitioners have already been tried four times prior to the latest trial after their arrest on October 27, 2013. Courts in China can try a person as many times as needed to get a conviction. The first three joint trials of the practitioners took place on March 25, April 2, and May 6.

Pressured by the local 610 Office, however, the court tried each practitioner separately a fourth time. Mr. Yao Yuandong (姚元东) and his wife Ms. Gao Sujuan (高素娟) were tried on August 21, while Mr. Long Gao (龙刚) was tried on September 4. 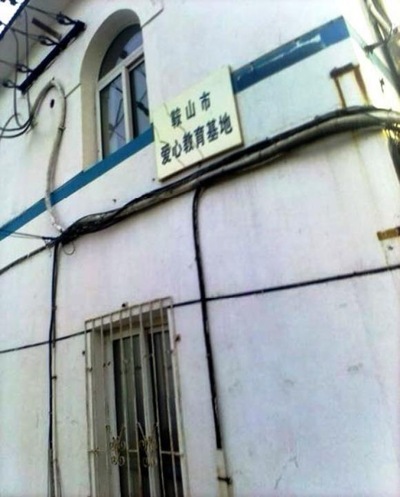 Anshan Brainwashing Center in Liaoning Province, officially known as “Anshan City Loving Educational Base,” as stated on the sign.

Parties responsible for the persecution: