New and veteran practitioners shared understandings of the importance of group Fa-study, letting go of selfishness, overcoming obstacles in truth-clarification, and how to work as a team to be more effective in saving sentient beings. 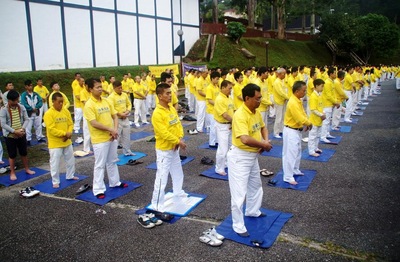 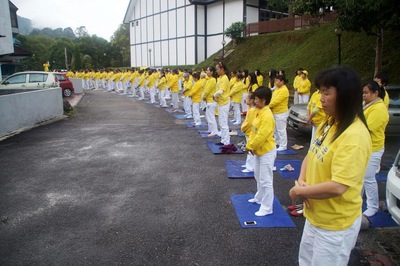 Falun Gong exercises in the morning

Ms. Zheng Xiuyan once traveled all over China in search of a righteous cultivation practice. She learned Falun Dafa in Shenyang City in 1996. Now 70 years old, her cultivation practice is focused on assisting Master during the Fa-rectification period, rather than simply personal cultivation. She is involved in telling Chinese tourists the facts about Falun Dafa and collecting signatures to condemn the Chinese Communist Party's harvesting of organs from living Falun Dafa practitioners.

When Ms. Zheng first went to the Independence Square tourist site in Kuala Lumpur, she didn't know how to approach the Chinese tourists or what to say to them. Some of them cursed her when she asked them to withdraw from the Party. She tried to pass out fliers that explained Falun Gong and the truth about the brutal persecution in China, but many tourists threw them away. She was very upset because she believed those lives were in danger.

Although she lacked a good approach to persuade Chinese people to quit the Party, Ms. Zheng continued to go to the square every day. She sent forth righteous thoughts there all day.

About a year later, she had just finished sending forth righteous thoughts when she saw a Chinese man walk by. An urge filled her heart to save this person. She approached him and said, “If you quit the Communist Party, you will be saved. Disasters will not harm you.” The man nodded in agreement. She was happy for the man because he had made the right choice. She was also happy for herself, because she was now able to clarify truth and help Chinese people quit the Party.

After forced organ harvesting from Falun Gong practitioners received international attention, Ms. Zheng joined other practitioners to collect signatures. They asked people to sign a petition to condemn the CCP's atrocities and to call for an end to the persecution. Because she could not speak Malay or English, she held a display board and passed out fliers.

One day Ms. Zheng and another practitioner went to a large mosque in the city to collect signatures. They sent forth righteous in the parking lot and prepared to enter the mosque to collect signatures. The practitioner gave Ms. Zheng a clipboard and a stack of blank petition forms and told her to go into the mosque. Ms. Zheng talked to people with her limited English and pointed at the petition to let the Malays read it themselves. She collected more than 50 signatures that day. This experience gave her confidence.

She incorporated signature-collection into her daily routine by taking a bus to a subway station, then taking a train to collect signatures from people in the neighborhoods near different stations.

One day she came out of a subway station and found herself in an Indian part of the city. Using a few simple phrases, she said to the Indian Malays, “You sign here. Stop (the CCP) organ harvesting. The Falun Gong practitioners will not die.”

One person who signed the petition led her to an Indian restaurant to collect more signatures. The boss, waiters and waitresses all signed.

Ms. Zheng met a few Chinese workers in a motorcycle garage. They all signed the petition. She went into each store down the street. A while later someone from the motorcycle garage found her and said his boss wanted to talk to her.

She was concerned, but the owner of the garage just said, “I want to sign, too. Please give me the form. Why didn't you ask me before you left?” Ms. Zheng was very happy for him.

As she has collected signatures over the years, she has met many kind people. Some have wanted to donate money or give her money to buy food. She always refuses and tells them that she is not after their money, just their support and signatures.

Ms. Zheng said she wanted more practitioners to join the truth-clarification efforts and the signature drive.

Clarify the Truth with No Hesitation

Ms. Guo Shufang from Sabah State shared her understanding about clarifying the truth to people of different religions.

She had tried to talk to the Chinese and Malays in her area, but many people wouldn't take her fliers about the persecution of Falun Gong in China or the forced organ harvesting from living practitioners.

As Ms. Guo offered a flier to one woman, the woman turned away. Ms. Guo told her, “It is very fortunate if one can learn the Truth. The Truth brings hope.” The lady turned around and took a flier. Ms. Guo was very happy that she had chosen to learn the truth. She believed that Master had given her the wisdom to know what to say.

Ms. Guo encouraged other practitioners to speak up without hesitation: “Don't assume anything. Just think that he or she is a life that you want to save.”

Clarifying the Truth in Teams

Helen from Penang City shared with the group that the practitioners in her area have been distributing fliers door to door for years, but she thought that was not enough. “We needed to have signature drives to publicize the organ harvesting crime in China,” she said. She encouraged local practitioners to form teams and organize activities to clarify the truth and collect signatures.

Mrs. Hu, a veteran practitioner from Kuala Lumpur, said she was moved by the sharings from new practitioners, which were pure and enthusiastic. “It is the feeling the Master talked about in “Fa Teaching on World Falun Dafa Day” (2014): “Cultivate with the heart you once had, and success is certain.'”

“From All Over the World to San Francisco: Speaking Up for Those Without a Voice in China”