(Minghui.org) As the persecution of Falun Gong in China continues unabated in its 15th year, confirmed arrests during the first nine months of 2014 increased by 42% compared to the same period in 2013. In particular, many group arrests were confirmed during July and September.

Between January and September 2014, 61 Falun Gong practitioners were tortured to death, 643 were tried, 19 were sentenced to more than 8 years in prison, 663 were taken to brainwashing centers, and 4,925 were arrested. Compared to 3,474 arrests during the first nine months of 2013, reported arrests have increased by 42%.

This data includes only confirmed cases. The actual magnitude of the persecution is likely to be much greater.

Most of the 61 confirmed deaths were concentrated in three northeastern provinces: Liaoning (13 deaths), Jilin (9), and Heilongjiang (6).

Between January and September, 643 Falun Gong practitioners from 28 provinces were tried. The following map shows the distribution by province. Liaoning Province ranks first, with 129 confirmed trials. 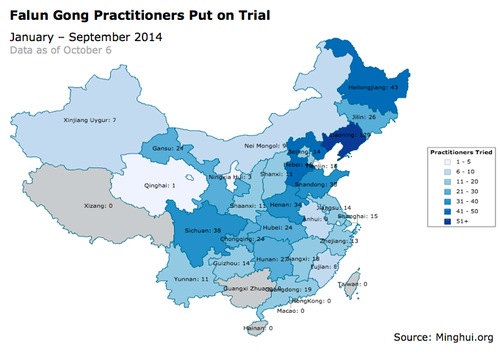 Nineteen practitioners were sentenced to more than 8 years, of which the longest term was 12 years (Wen Jiguo (文继国) of Guizhou Province): 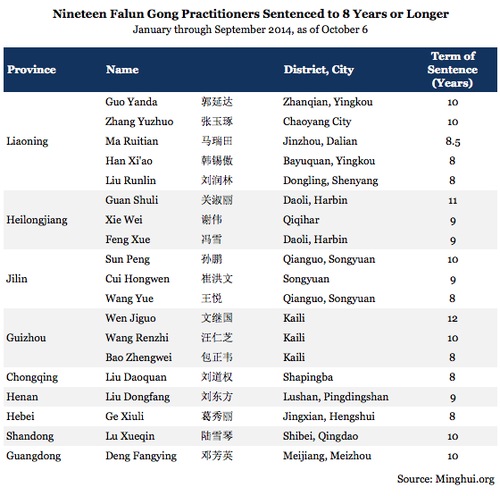 Brainwashing centers, which are extra-legal detention facilities also known as black jails, have largely replaced labor camps, that were declared to have been shut down in 2013.

Between January and September 2014, 663 practitioners were sent to 119 brainwashing centers across 25 provinces. 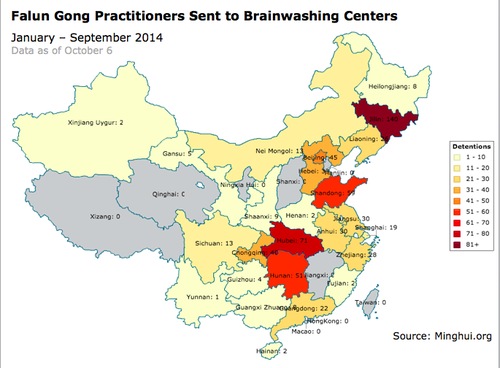 July saw the maximum number of confirmed arrests (863). The comparison between 2013 and 2014 is shown below: 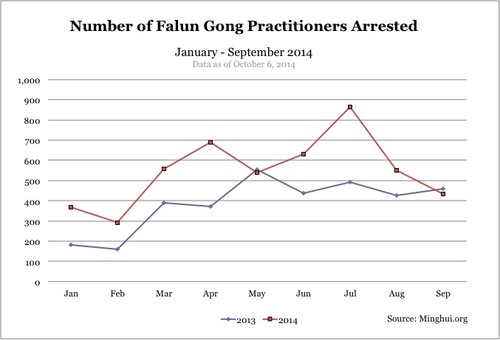 The three provinces with the highest number of arrests are Shandong (651), Liaoning (506), and Jilin (459), which average over 50 arrests per month: 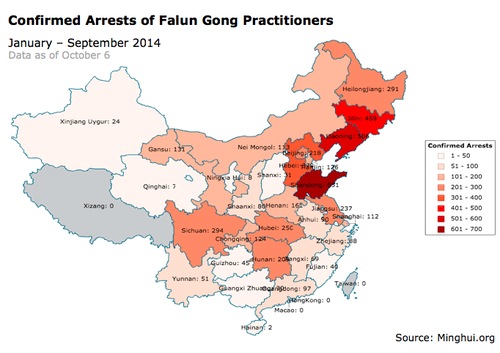 Confirmed arrests occurred in 29 Chinese provinces, and were absent only in Hainan Province and the Tibet autonomous region.

Between July and September, 306 practitioners were sent to 64 brainwashing centers, in 23 provinces.

“Prison Official to Beaten Practitioner: “Just Endure It and Let Them Have Some Fun””