A Once Happy Family Falls Apart

(Minghui.org) “Mom, I'm back!” The 15-year-old girl opened the door of her home after school on September 23, 2014, only to find her mother missing and their home in a mess. Falun Gong related items and their computer were gone. She cried, “Mom has been arrested again!” 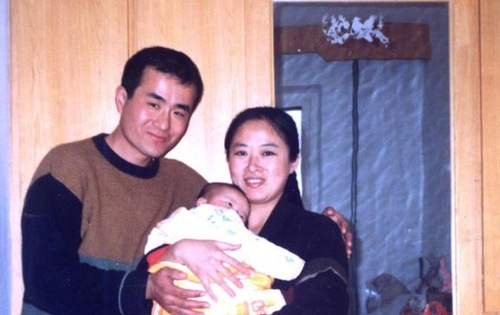 A Once Happy Family

This was Ms. Liu Xinying's (刘新颖) second arrest since her husband Mr. Qu Hui passed away on February 19, 2014. Mr. Qu had become paralyzed due to long -term shocking by electric batons at the Dalian Forced Labor Camp in 2001. He was confined to his bed for 13 years, and Ms. Liu provided extensive care for him.

Soon after Mr. Qu's death, the police illegally arrested Ms. Liu on March 21, 2014. The detention center declined her admission on account of her weak physical condition. The police had to release her.

She failed the health examination again after the latest arrest in September. However, the police kept her this time at Dalian 210 Hospital. The Zhongshan Court quickly arranged a trial for her on September 29, only six days after the arrest.

Ms. Liu's daughter and her elderly father were denied admission to attend the trial. The court claimed that they were either too old or too young. Her sister-in-law was the only family member allowed into the courtroom.

According to her sister-in-law, Ms. Liu was carried into the court room by the police, with her hands and feet cuffed. She appeared to be very weak. She didn't speak except for her final statement. She shared with everyone the benefits she and her husband experienced with practicing Falun Gong, her husband's paralysis due to torture and recent death, and the hardship the family went through in the past 13 years.

Prior to the two arrests in 2014, Ms. Liu was arrested on June 21, 2013 for helping escort attorneys from Beijing to Dalian to defend Falun Gong practitioners who were charged for installing satellite dishes to receive uncensored overseas Chinese TV programs. She had two heart attacks when being interrogated by the police. The police released her, but continued to monitor her. She was even harassed at her husband's funeral in February.

After sentencing the eleven practitioners involved in the case earlier this year, the court turned to her and attempted to take her to prison.

The prosecutor didn't provide any substantial evidence to charge Ms. Liu, as the only piece of evidence presented was that she installed satellite dishes at home to receive uncensored programs.

The judge quickly adjourned the trial, without giving a verdict. Ms. Liu was taken back to Yaojia Detention Center, where she is being detained.