(Minghui.org) Falun Gong practitioner Mr. Hu Guojian from Fushun, Liaoning Province was illegally arrested in 2000. He was tortured throughout the night at Jiangjun Police Station and later sentenced to a ten-year prison term. The tortures he endured in prison included electric shock, solitary confinement, and forced labor, among others.

Mr. Hu Guojian was born in June 1970, and worked at Fushun Mining Light Factory. He started practicing Falun Gong in 1998. Within a week his illnesses had disappeared, including a tumor that caused a severe hemorrhage in his stomach.

Mr. Hu was illegally arrested by the police while sharing his cultivation experiences at a fellow practitioner's house on December 16, 2000. That evening, more than 70 practitioners attended the experience sharing meeting. When the police came in, they ordered practitioners to squat down.

The practitioners were later taken to the Shuncheng District Police Department for registration, then transferred to other police stations.

Mr. Hu was taken by two young policemen in their twenties to the Jiangjun Police Station. As soon as he got there, he was handcuffed and shocked with electric batons. The two young officers stomped on his back with the heels of their shoes. While he was being beaten, the police demanded that he tell them who organized the meeting. Mr. Hu replied, “I don't know. Someone told me when I was doing grocery shopping.” They then asked him what the person looked like. Mr. Hu was then handcuffed to a heating pipe, in a position where he could neither completely squat down nor stand up. At the same time, the police kept shocking him, and punching and kicking him hard. 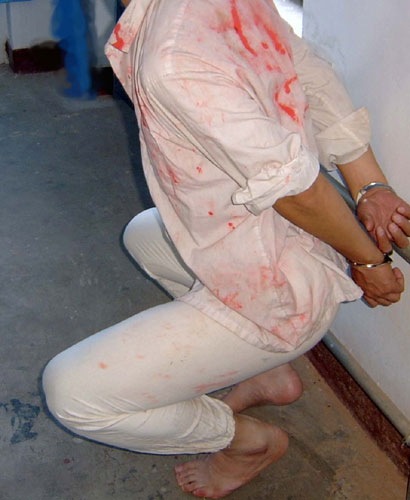 Torture reenactment: Half squatting with hands cuffed behind the back

When the police tired from beating him, they forced Mr. Hu to remain in an awkward position, half squatting and half standing, in order to torture him further. If he moved, the officers shocked him until the electric batons ran out of power. Mr. Hu was tortured this way throughout the night. At around 6:00 a.m. the next day, he was taken to Fushun No. 2 Detention Center. Another practitioner who was at the experience sharing meeting was also taken there with Mr. Hu.

Two months later Mr. Hu was transferred to the No. 1 Detention Center because someone who had been “transformed” handed over the truth-clarification materials that he had made. When Mr. Hu first arrived at the No. 1 Detention Center, the cell head said he admired Falun Gong practitioners. He was then taken to another cell (No. 7). As soon as he arrived, two inmates forced him to squat down, and punched and kicked him for over thirty minutes. They then poured cold water over Mr. Hu for more than twenty minutes. It was February 2001 and the weather was still very cold. He was soaked in cold water and shivered severely.

Mr. Hu was taken to the police department and his hands were cuffed behind his back. A motorbike helmet was placed on his head, and he was tied to a heating pipe. Officers then began shocking him with electric batons. The pain was excruciating. The police demanded to know where Falun Gong practitioner Dou Zhenxiang was (Mr. Dou had already died as a result of torture). Mr. Hu didn't know where Mr. Dou was or what had happened to him, so the police accused him of lying and continued shocking him.

The four officers took turns shocking Mr. Hu, two at a time. When one pair got tired, the other pair took over, changing shifts once every two hours. They shocked the sensitive parts of Mr. Hu's body, including his armpits, around his crotch, the top of his head, and his back. He felt like being hit by hammers when he was shocked, and he later passed out.

Mr. Hu was tortured this way throughout the night, until dawn the next morning, and taken back to the detention center after 7:00 a.m. He went on a hunger strike for four days to protest the illegal torture.

Mr. Hu was sentenced to a ten-year prison term in November 2001 and was taken to Dabei Prison.

The unit head in charge of the unit where Mr. Hu was imprisoned was Li Jianguo, a man in his thirties. They started attempts to “transform” Mr. Hu as soon as he arrived. Two “transformed” people, who had gone astray in their beliefs, were assigned to work on him Mr. Hu. He rejected their fallacies, and they stopped trying to persuade him to give up his belief. They tried to show him videos which slandered Falun Gong, but Mr. Hu refused to watch, so Li Jianguo sent Mr. Hu to a solitary confinement cell, as a form of intensified punishment.

Mr. Hu and thirty other practitioners were later made to share one room. They studied and recited the Fa together. A few months later, Li Jianguo ordered team leaders Zhou and Li to search their room and confiscate all their printed Falun Gong teachings. The practitioners went on a hunger strike to demand the return of their Falun Gong materials.

Four days later, Mr. Hu was sent to do forced labor in another division. He refused to do the forced labor as he knew he had not broken any laws, and was not a criminal. He was then allowed to do cleaning work. Mr. Hu spent over a year in that division before he was transferred to the division set up solely for persecuting Falun Gong practitioners. Mr. Hu recited the Fa every day. Li Jianguo searched practitioners again and their Falun Gong teachings were confiscated. They were sent to solitary confinement. Huang Gang was locked up there for four months. Mr. Cong from Fuxin City was locked in a solitary confinement cell even during the Chinese New Year period.

Mr. Hu and more than twenty other practitioners held hunger strikes to demand Mr. Cong's release from the solitary confinement cell. Soon after the Chinese New Year, Mr. Hu was sent back to an ordinary division, where he was imprisoned for over a year before being taken back to the special division for persecution. Falun Gong practitioners held another hunger strike for four days and the special division was then dismantled. It was already May or June 2005 by then. 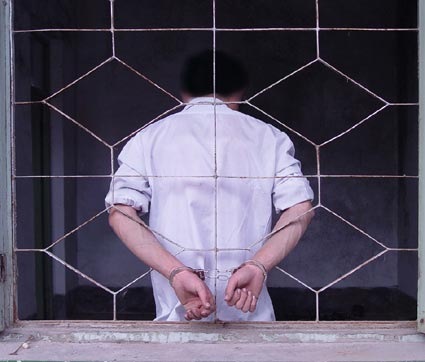 Torture reenactment: Shackled to window bars while in solitary confinement

Mr. Hu was sent to Unit 7 at the No. 1 Prison. One inmate tried to frame Mr. Hu by stealing someone's Falun Gong book and putting it in Mr. Hu's place, claiming it was his. The inmate got a reduction of three months off his sentence for doing a “deed of merit.” The guards refused to listen to Mr. Hu's clarification of the facts, and instead sent him to a solitary confinement cell. Mr. Hu went on a hunger strike for four days before he was transferred to another unit.