Understanding the “April 25, 1999” Appeal: What Really Happened in Tianjin on the Days Leading Up to the Appeal (Part 2)

(For brief background information on the April 25 Appeal click here .)

April 23-24, 1999: Explaining the Arrest Incident at the Tianjin Education College

Practitioner A: When I went out to use a pay phone at 6 p.m., I noticed at least six large police vans were parked near Hami Road; each van could hold about 20 people. When I returned to campus, the police officers had already begun to drag practitioners around and beat them. Usually three or four officers worked together, pulling practitioners to the campus gate and throwing them out. By doing so, the officers were warning and threatening the practitioners. However, many practitioners, thousands of them, did not give in so easily.

Practitioner B: Police officers started to drag out practitioners from the crowd around 7 p.m. Plainclothes officers also took away those of us volunteers who were trying to help maintain order. Two plainclothes agents came up to me and told me to leave with them. Then they grabbed my arms, one on each side of me, and took me outside. As we passed the campus gate, I saw four officers dragging an elderly lady by each of her limbs; her back was bare and being dragged along the ground.

The agents took me to an empty room, and I demanded to know why they had taken me there. One agent said they had received orders not to allow the practice of Falun Gong. I explained to them that if they would only read Zhuan Falun, they could easily tell that Falun Gong was different from what He Zuoxiu had claimed in the college journal. The agent was annoyed by what I said and began shoving me, so I yelled for help

So many of us simply came to the Tianjin College of Education to tell people about our experiences in practicing Falun Gong, and that we did not deserve to be mistreated. Upon hearing me yell, some people in the other rooms came to see what was happening. The officer knew he was wrong and stopped, and they soon released me.

Practitioner E : Seeing that their harassment was failing to stir up chaos among practitioners, the officers began using some other strategies. There was a young practitioner talking with a young girl. An officer came up to them and told the girl to walk away, then he began shoving her harshly. The girl cried, and a young practitioner from Northern Tianjin, who was wearing a “Falun Dafa is good” shirt, came up to the stop the officer: “What are you doing? She's just a little girl.” Without saying a word, the officer grabbed him and slammed his head against a wall. His head was bleeding and the officer took him away.

The little girl's mother, who was also a practitioner, remained calm as she saw this happening, as did the other practitioners at the scene. By following the principles of Truthfulness-Compassion-Forbearance, everyone remained peaceful despite the confusion. Someone began to recite Lunyu, and he was joined by many other practitioners. All the while, the police kept harassing and pushing us around. Our unflinching peacefulness in the face of outright wickedness felt very sacred.

Practitioner A: As it was getting dark, a large number of riot police showed up. They were all young men in their 20s. They blocked off the roads and divided practitioners into different sections. All of the practitioners and riot police were just looking at each other, but nobody said anything.

Then the officers began to clear the area. Each group consisted of over 10 officers, and each group was responsible for a single area. They began kicking and shoving practitioners, regardless of whether they were elderly or young, and threw them into police vans. One practitioner surnamed Huang was dragged by his four limbs and thrown into a van. Some officers waved batons and screamed orders to dispel practitioners. Many practitioners, including me, picked up their personal belongings and walked away without saying anything. Behind us, the officers were still screaming. Throughout the whole process, no practitioners resisted or yelled any slogans.

Practitioner D : Before the riot police came, several cars arrived at the Tianjin Education College. Someone saw that Song Pinghun, Tianjin's Political and Legal Affairs Committee head, was in one of the cars, and the riot police arrived shortly after they left. A security officer who worked for the college assisted police with the arrest. I saw one practitioner, a major in the army, being taken away by two police officers. Another practitioner, Jiang Jiusheng from Ninghe County, was carried away by police officers at each of his four limbs.

I was also arrested. One officer from the Tianjin City Police Department came up and told the riot police that he would take care of me. He then immediately released me.

I had talked with him previously about Falun Gong on several occasions, explaining how what the Tianjin Education College did was wrong. Because some practitioners had housing on the campus, one day he suggested that I to tell them to leave. I told him that Falun Gong does not have an organizational structure and that practitioners simply act based on their own understandings. I then gave him a copy of Zhuan Falun . After reading the book, he knew that we are good people and had not come to the college to make trouble. He knew that everyone was studying the practice and that it was a peaceful group. He was moved by what he was observing, so he helped let me go.

Practitioner C : The Tianjin Education College did not correct their wrongdoing, and Tianjin City officials instructed the police to mistreat us. They claimed repeatedly that they were simply acting on orders from higher ranks. After being forced out of the college campus, we naturally walked to the Tianjin City Administrative Building. We made very little noise and were sure not to disrupt any traffic as we walked there.

At the Tianjin Administrative Building 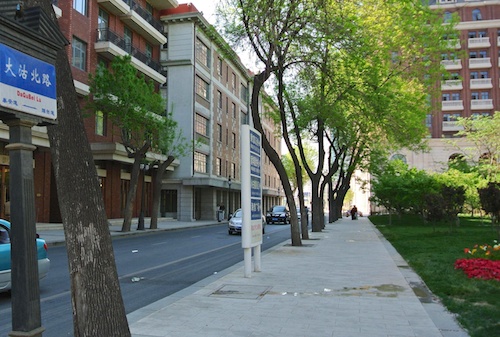 Practitioner C : Many practitioners stood quietly in a small garden in front of the administrative building, and others were on the sidewalks around the building. No one was standing on the road or blocking any traffic. Some plainclothes police were also in the crowd and trying to stir up problems. It was very easy to identify them since they spoke curse words so often.

Someone in the administrative building then came out, saying that they needed to talk with the practitioners' representatives. After witnessing the communist regime's viciousness at the Tianjin Education College, practitioners reminded each other to be clearheaded and wary of being framed. After all, we were only requesting the release of detained practitioners, to correct the erroneous statements made by the college's journal, and to restore the innocence of Falun Gong.

An elderly female practitioner went into the building with police at about 11 p.m. Concerned about her safety, a middle-aged female practitioner, who was from Dagang District, also went in with her. Both of them came out after a while. They spoke with an officer, and after the two practitioners calmly explained what had happened, the officer agreed to release the detained practitioners.

As we were discussing what to do next, an officer gave a loudspeaker to the middle-aged woman, and they had her tell the crowd about the released practitioners. She then told the practitioners that since the officials had agreed to release the practitioners, we could leave.

In order to rescue the detained practitioners and peacefully resolve the issue, we thus left the scene.

It was 2:30 a.m. when I returned home. One practitioner who went with me but was arrested returned at about 3 a.m.; he had bandages on both hands. We learned the next day that not all of the detained practitioners had been released. Therefore, some of us went back to the city administrative building, but the officials refused to let us stay there.