Understanding the “April 25, 1999” Appeal: What Really Happened in Tianjin on the Days Leading Up to the Appeal (Part 1)

(Minghui.org) On July 20, 1999, the Chinese Communist Party (CCP, then led by Jiang Zemin) launched its persecution of Falun Gong, which has now lasted for 14 long years. One of their major reasons cited for starting the persecution was the April 25 peaceful appeal in 1999. On that day, approximately 10,000 Falun Gong practitioners went to the State Council Appeals Office to peacefully uphold their right to freedom of belief.

This incident sent a shockwave around the world and was initially reported by western media as “the largest and most peaceful, rational appeal in China's history”. However, the Jiang Zemin regime twisted the facts and labeled the appeal as “politically motivated” and a “siege of the Zhongnanhai central government compound.”

But the April 25 peaceful appeal was not a siege at all. Nor was it politically motivated. What actually happened? This article sets forth the facts.

It all started at Tianjin Education Institute 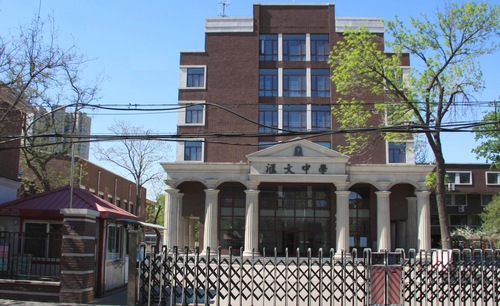 The Science and Technology for Youth magazine published by Tianjin Eduction Institute was circulated nationally and enjoyed a measure of social impact. On April 10, 1999, He Zuoxiu, a physicist who was more interested in politics than science, published an article in the magazine titled: “I'm not in favor of young people practicing Qigong”, in which he directly attacked Falun Gong and its founder with malicious lies and various slanderous remarks.

Following the article's publication, some practitioners went to the Tianjin Eduction Institute to clarify the facts, hoping that through direct communication with the Editors Office, the negative and adverse impacts of the article could be cleared up.

Practitioner “A”, in her 60's, heard about the slanderous article and went to the institute with others. She was there from April 19 to 23, waiting for a response from the institute, and she witnessed the entire process and events those few days.

She recalled: “From April 19, practitioners came to the eduction institute one after another. Most of us waited quietly outside, while a few went inside to talk with the relevant institute personnel. Some practitioners came with letters to share with the institute how they and their children had benefited from practicing Falun Gong; some brought their children with them to validate the goodness of Falun Gong.

Among them, one little girl attracted much attention. She used to suffer from leukemia and had lost all of her hair due to chemotherapy. After she started practicing Falun Gong, her condition improved rapidly and she was able to go back to school after recovering from the illness. She came with her mother to explain the benefits of Falun Gong through her own experience.

Practitioner “B” in his 50's, couldn't stop the tears from welling up when he recalled the events at Tianjin Education Institute 14 years ago:

“While I was at work, a fellow practitioner asked me if I'd heard about the article in Science and Technology for Youth magazine, which made false accusations against Falun Gong and had very adverse impact among the people. Some practitioners had gone to the education institute to clarify the facts. I was shocked to hear this, unsure of why anyone would oppose such a good cultivation practice. I decided to go there myself and take a look. The next day after the morning group exercises, we had a brief discussion about the incident and decided that we should explain the facts about Falun Gong to the education institute personnel. I went there that morning.”

Practitioner “C”: “I was living in the remote suburbs of Tianjin. When we heard about the incident, a few practitioners and I had a discussion and felt that since we'd all benefited so much from practicing Falun Gong, that we had an obligation to clarify the facts to the education institute. Beginning April 19, some practitioners in our area started to go to Tianjin Education Institute to clarify the facts and to ask the Editors Office to restore Falun Gong's reputation.”

Peaceful and orderly gatherings, despite the propaganda otherwise

Practitioner “D”: “More practitioners arrived by April 21, including many from Hebei Province, so the education institute was crowded with practitioners. To maintain order, practitioners kept quiet and didn't move around. Some local practitioners took the responsibility to greet those from out of town and arranged sites for them to sit and wait for news from the institute talks. I took care of practitioners from Dagang and Ninghe, who came by bus.

“Some brought their entire families to clarify the facts; some even brought their infants and young children. There were also practitioners in the military service who arrived in uniform. Even though there were a lot of people onsite, it was very peaceful and orderly. When evening came, some local practitioners took those from out of town to their own homes for the night; some practitioners from elsewhere spent the night in the open on campus as they didn't want to burden local practitioners. Practitioners helped each other and shared their resources. We all had the same wish – to validate the grace of Falun Gong through our own words and actions.

“One practitioner wanted to record the event, so another practitioner and I offered to help him, but we were stopped by the head of the security section of the institute and two plainclothes officers. They forced us to leave the videotape with them. I also noticed that there were staff in the two buildings near the main gate of the institute who secretly videotaped all practitioners on the scene from behind the curtains.”

Practitioner “B” continued: “On April 22, I was sitting on the left side of the institute's main gate. Quite a few practitioners from out of town arrived that afternoon, so I helped keep order with another practitioner. Later, this practitioner had to ask practitioners to leave before the police cleared out the site by force. Many onlookers were outside the gate, some living in the nearby buildings. They said: 'You Falun Gong people are so good. There are so many of you, but everything is in orderly and so quiet.'

“Soon after, I noticed secret police mixing among us. They usually followed those who were maintaining order. Some also tried to be friendly in order to find out who the organizers were. Practitioners were very honest with them, as they all came with kind intentions and good will. Two officers approached me twice trying to get some information, since they believed that practitioners must have been highly organized in order to maintain such good arrangements. I kept telling them that we cultivated “Truthfulness-Compassion-Forbearance”, and all came of our own accord to clarify the facts because we'd benefited from practicing Falun Gong. At first, the plainclothes officers were not hostile.”

The Institute's promise and the contradictory “orders” from higher authorities

Practitioner B: “I heard that there was a positive outcome from the talks with the institute the first day. The institute staff didn't know much about Falun Gong, but were positively affected by practitioners' explanations and promised to correct their errors and restore Falun Gong's reputation.

“However, the next day (April 23), I heard the plainclothes police talking amongst themselves: 'We have orders from above forbidding the institute from rectifying the situation.'

“I didn't understand what they meant, but felt the atmosphere begin to change. We waited quietly and the site remained peaceful and orderly - inside and outside of the institute. Traffic was also running smoothly.

“The Tianjin Police Department sent several officers to direct traffic on the nearby streets. One officer praised us: 'You are so orderly and disciplined, much better than the army!' Of course, he didn't understand that we didn't have an organization, let alone organizational discipline. We just followed the principles of Truthfulness-Compassion-Forbearance, and regulated our conduct with these principles in out hearts.”

Magnificent scene that encouraged us all

Practitioner “E”: “Just past 4:00 p.m. on April 23, I looked up to the sky and saw what appeared to be several suns. Taking a closer look, I was astonished to realize that they were in fact Falun (universal law wheels)! They were so bright and colorful, just like the one we saw in Master's Fa lecture videos. I shouted: 'Look, Falun!' Practitioners looked up and became very excited. We called out to Master, and clapped our hands while wiping away our tears. Suddenly, the sky above the institute was full of Falun. They kept rotating and changing colors; some were big and some were small; some appeared on the teaching buildings and were falling onto our bodies.

“Everyone there was stunned. One officer was terrified and ran out the gate, shouting, 'Oh...(expletive)! There are so many Falun!' Onlookers also witnessed the magnificent scene. They said excitedly, 'Look, this one is red, that's a green one, and a blue one...' This continued for about 25 minutes, then a group of police arrived. They shouted loudly as they tried to disperse the crowds, but no one paid any attention to them. Practitioners remained quiet and peaceful. Then, more Falun appeared on top of the opposite building, and people started to cheer and clap their hands, including the police and onlookers. I heard some officers talking quietly: 'Good heavens! It's all real. Let's not bother them any more!'”

Practitioner “A” continued: “From 4:30 p.m. on April 23, it felt like the whole institute was covered with a protective mantle; the atmosphere was sacred, solemn and intense. We saw many officers arriving at the institute. We were there to peacefully and rationally clarify the facts to the education institute, but the CCP tried to twist the facts and falsify evidence against us. An issue that could have been resolved easily was used by the CCP as an excuse to violently suppress Falun Gong. One couldn't help asking: 'Is it wrong to be a good person?'”

“We remained peaceful and calm amidst this dynamic environment. Suddenly, someone started to recite Lunyu (foreword of the book Zhuan Falun), then others joined in. Gradually, the recitation filled the entire campus as several thousand practitioners recited Lunyu together, over and over.

“Just then, countless colorful and beautiful Falun appeared again in the sky. Practitioners started shouting excitedly, as Falun kept appearing and rotating in the sky.

“Many onlookers including police also witnessed the magnificent and magical scene, and were equally stunned and amazed. Some began to criticize the CCP, 'These people are good people. What's the point of arresting them?'”