(Minghui.org) Experience sharing conferences are gatherings where Falun Dafa practitioners come together and share their insights and understandings based on the teachings of the practice. In this relaxed and peaceful environment, practitioners encourage each other and try to identify their shortcomings so as to steadily improve in their cultivation practice.

The Canada Falun Dafa Cultivation Experience Sharing Conference was successfully held in Convocation Hall at the University of Toronto on August 24, 2013. More than a thousand practitioners attended the grand occasion.

Twenty-two practitioners talked about how they gained new insights on their path of cultivation. They shared how they follow Master's teachings and hold themselves to the standard of Truthfulness-Compassion-Forbearance in their work and family environment, as well as in various Dafa-related projects. Many practitioners shared how they looked within to cultivate themselves well in order to better assist Master in the Fa-rectification and in saving sentient beings.

The conference site was solemn and peaceful. A photo of Master Li was hung at the front, and on both sides of the stage were vertical banners reading “Truthfulness-Compassion-Forbearance” and “Falun Rotates Endlessly.” In addition, there were eight huge banners emblazoned with beautiful Falun. 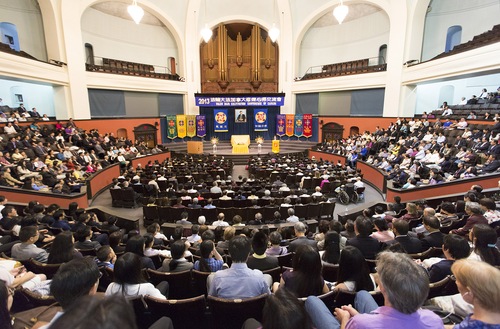 The 2013 Canada Fa conference at the University of Toronto 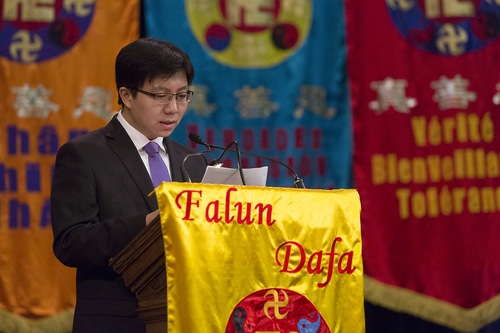 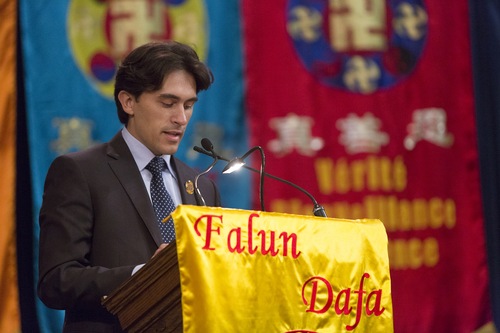 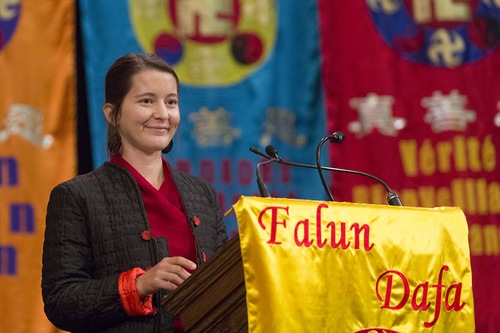 1. Seize Every Opportunity to Save the World's People with Righteous Thoughts

Ms. Dong came to Canada two years ago from China. She shared how she overcame fear and spoke on the phone to people involved in the persecution in China. Ms. Dong said, “I collected a pile of phone numbers and prepared in my heart all the truth-clarifying information I wanted to convey. Then I called the phone numbers one by one. Everything turned out to be miraculously smooth.”

Ms. Dong also talked about how she makes use of every opportunity, when she walks to and from work, when she goes out for grocery shopping, even when she walks past someone, to speak to them about Falun Gong and the persecution.

“In my daily life, I make use of every single opportunity to clarify the truth. Even on the sidewalk when I just walk past someone. I also clarify the truth and talk to Chinese people about quitting the Chinese Communist Party (CCP) and its affiliated organizations,” she said.

Ms. Dong also participates in making phone calls to other Chinese people to clarify the truth to them. She said, “In order to have sufficient time to do everything, I usually sleep only four hours a night, from 12:30 - 4:30 a.m. That has become a fixed schedule for me. Every morning, I make sure I do the five sets of exercises and then I call China for two hours to clarify the truth before I start my regular work day.”

2. Cultivate Oneself Well, Do a Good Job in Managing the Media and Save More People

Ms. Hu from Montreal is a coordinator of a media outlet. She talked about her 16 years of cultivation in Dafa, and her ten years of experience working as a media coordinator since 2003. She recalled the hardships she has gone through and how she cultivated herself well in the process.

Ms. Hu shared, “From eliminating selfish thoughts to thinking about others first, I have come a long way on the path of Fa-rectification cultivation, guided by Master and supported by fellow practitioners.

“I stopped being driven by my own preferences, and just did what was needed. I take my responsibilities as managing director of the local media outlet seriously. We have become the largest and best Chinese-language newspaper in our local area,” she said.

3. Letting Go of Self and Keeping Sentient Beings in Mind

Mr. Ma from Toronto talked about his experience of cultivating xinxing while working in a Dafa-related project, and how he let go of self and saves predestined people in his everyday work environment.

He said, “I understand I have to 'let go of myself' at all times during cultivation. My desire to show off, jealousy, zealotry, grudges, hatred and competitive mentality all originate from selfishness. Those attachments could be exaggerated. In contrast, if I let go of myself at all times, those attachments become very weak and even vanish. In this situation, the quality of our work on projects is the best.”

Mr. Ma used his lunchtime in his company to collect signatures for a petition condemning the CCP's crime of forced organ harvesting from imprisoned Falun Gong practitioners. He said, “I understand that this is the place for me to save sentient beings. No matter how busy you are, or whatever you do, people are waiting to be saved.”

Mr. Ma also shared how he promoted Shen Yun at his work. He said, “My boss helped and supported me to promote Shen Yun. I used our group email to sell Shen Yun tickets. We have several famous artists that went to see the show every year and made excellent comments about Shen Yun.

“I was encouraged to take the Shen Yun sales test. It was the last session. I went out on weekends to sell tickets. Even though I didn't have much experience in selling tickets, with Master's support and practitioners' encouragement, I sold around one hundred tickets at ticket booths and at my company during the two months before Shen Yun came. I was so motivated.”

Ms. Liu, who works in a court, talked about how she offers salvation to predestined people in her work environment. She shared her understandings and observations. “For those Chinese people who know that Dafa is good and agree to quit the CCP and its affiliated organizations, divine beings are taking care of them. They have enormous blessings. In this human dimension, their cases are either withdrawn or end up in a much better situation. They do not need to come back to court, so my time and energy can be spent on other people,” she said.

Ms. Liu continued, “For those who heard the truth of Dafa but did not quit the CCP, in this human dimension, it will usually be that their cases are not finished, and they have to come back to court. I understand that they are arranged by Master to see me again and listen to the truth until they are saved by the Buddha Fa.”

5. Truly Feeling that the Media Projects Are Effective in Saving Sentient Beings

Mr. Zhang is a full-time journalist for a newspaper run by Dafa practitioners. He said, “It's been very busy working for the paper. I often have to work 7 days a week because we don't have enough journalists. Hearing how the newspaper has really changed many ordinary people's views made me feel that it's really been very effective in saving sentient beings.

He continued, “I recently interviewed a Western practitioner whose life was in a desperate situation. His life completely turned around after he began cultivating in Falun Gong. He learned about Falun Gong by reading our newspaper.”

Mr. Zhang added, “I found that many Chinese people know about the relationship between the paper and Falun Gong. As a journalist, I think that the better I do my job, the more people will agree with us, and the better mentality they will have towards Dafa. I put in even more work for the interviews and writing articles because this is my path for validating the Fa and saving sentient beings.”

The Toronto Fa-study and Truth Clarification Group has been holding Saturday group Fa study for over a decade. With Master's benevolent care, fellow practitioners cooperate well and share with each other based on the principles of Dafa. When problems occur, everyone can keep an open mind and look inside. The cultivation environment has been good.

In this truth-clarification group, there are young practitioners in their teens, as well as middle-aged and senior practitioners in their eighties. Most of them do the truth clarification at the forefront, and some also work in media projects. In truth clarification activities, they group together in twos or threes, based on their schedules. They go to all different areas such as public areas, university campuses and Chinese supermarkets to clarify the truth, help people quit the CCP and its affiliated organizations, and collect signatures to oppose the persecution. They have experienced many remarkable and moving stories along the way.

After the Fa conference concluded, many practitioners shared their observation that the articles presented at the conference did not focus on what the practitioners had done or what results they had achieved; instead, each speaker looked within and talked about how they rectified themselves according to the Fa principles during their Fa-validation. The practitioners who listened to these sharings also reflected on themselves and found where they fell short in their own cultivation. Practitioners said that they felt they benefited a great deal from the conference.