The Chinese delegation that accompanied Yu demanded that the Denmark government do whatever it needed to do to limit or stop Falun Gong's presence and influence during Yu's visit.

To that end, the visiting delegation pressured Denmark officials to cancel all media permits issued to both The Epoch Times and NTDTV —two independent international Chinese companies known for their objective news reports. 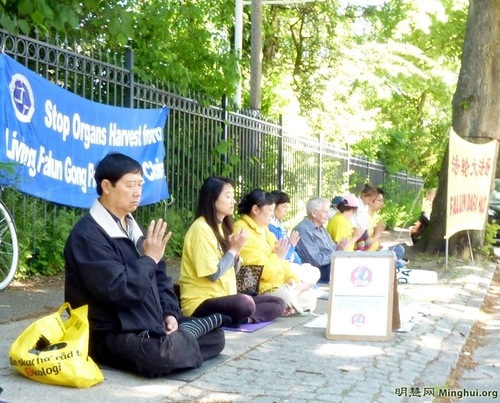 Practitioners peacefully protest in front of the Chinese Consulate in Denmark 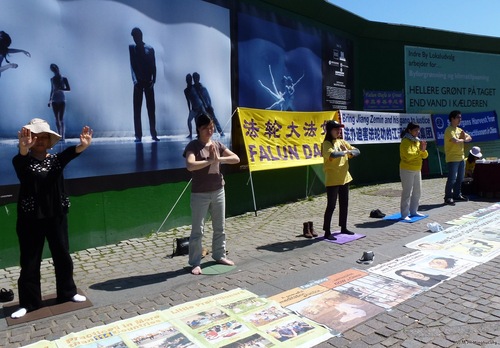 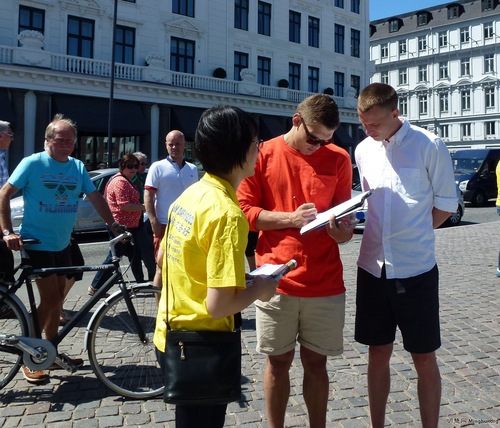 Passersby sign a petition calling for an end to the persecution

From the moment that Yu Zhengsheng stepped off his plane , he was met with solemn protests wherever he went.

On June 5, practitioners went to the Chinese Embassy in Copenhagen to protest the Party's 14-year persecution of Falun Gong and called on the Danish government and its citizens to help stop the organ harvesting of live Falun Gong practitioners in China.

Practitioners then clarified the truth to passerby in New King's Square and held banners in both English and Chinese. People who had never heard about the persecution were shocked and signed a petition supporting Falun Gong.

When the Chinese delegation saw the practitioners' banners exposing the regime's crimes, they told Danish officials to order the police to stop the protest.

On June 6, three practitioners who were wearing yellow T-shirts were forcibly pushed into a waiting police car and driven far away.

Ms. Wu, who was not wearing a yellow T-shirt, asked the policeman standing next to her, “Why did the police force those women into a car and then drive away? They were just wearing yellow T-shirts; they weren't even holding banners!” The policeman replied, "The Chinese delegation said that they do not want to see any more yellow T-shirts for the remainder of their visit.”

Wu said: "If I were the Danish government, I would tell the Chinese delegation: 'Denmark is a democratic country, and as such, people can wear whatever they want here; we have no right to interfere.'” The policeman said that he shared the same view.

“Do you know why those three women came here, today?” Ms. Wu asked the officer. “They just wanted to tell people about the ongoing persecution in China and to ask them to help stop the Chinese regime's practice of organ harvesting from live Falun Gong practitioners.

“In China, if you write a letter to your relatives and mention the fact that Falun Gong is good and that the persecution is wrong, you will be imprisoned for three years." The policeman understood but said that he could not do anything about it.

A reporter from Danish newspaper Ekstra Bladet asked Falun Gong practitioner Ms. Li what she thought about the situation. "The three of us were quietly standing there wearing yellow T-shirts,” she explained. “As Danish citizens, we have a right to tell visiting Chinese officials to immediately stop the persecution of Falun Gong. Several officials said that they empathized with Falun Gong but they had to carry out the orders that were passed down to them.”

The Danish Parliament and Royal Family media departments had issued official permits to The Epoch Times newspaper and NTDTV , giving their reporters permission to attend two meetings between the Chinese delegation and Denmark officials. However, these reporters were later told that the Danish government was "only allowing state media to report" on these two meetings.

Later that afternoon, these same reporters were refused entry into the Royal Palace, due to so-called "plan changes." They were told that only Danish Royal photographers and specifically chosen Chinese reporters would be allowed to enter the Palace.

Major media companies in Denmark were in an uproar over the CCP's antics, and publicly condemned them for interfering with the freedom of speech in their country.

On June 8, the Jyllands-Posten newspaper published a full-page article admonishing the way that the Danish government had grovelled to the CCP. The photo caption in the article read: "China's No. 4 figure, Yu Zhengsheng meets with Danish MPs. The above photo was supplied by China's official media photographers because Danish reporters were not permitted to take any photos, save for the photo of Yu walking up the Parliament steps."

The article noted that according to the original official schedule, Yu and his delegation were due to meet with the Chairman of the Danish Parliament, on the morning of June 6. It is customary that all media reporters be allowed to photograph such an event.

Thus, on June 5, the Danish Parliament media department, which is responsible for issuing media permits, had sent an email to The Epoch Times reporters stating, "Your application to attend the meeting between Mr. Yu and the Chairman of the Parliament has been approved.”

According to Jyllands-Posten , Danish officials were initially reluctant to go along with the Chinese delegation's request. The Chinese delegation responded by saying, “Ok, then let's not have any media present at the event!” At that point, the Danish Parliament agreed to reduce the number of reporters at the event and cancelled the media permits of The Epoch Times and NTDTV .

It is common practice for the Danish government to invite all media companies to the Parliament building's Meeting Hall, whenever a foreign official visits Denmark. Danish officials could not clearly explain why they had changed this longstanding policy at the behest of a visiting Chinese official.

When a Jyllands-Posten reporter questioned Denmark's Deputy Minister of the Foreign Affairs Committee, Søren Espersen, about the controversial incident, the minister replied, "This is totally unacceptable and should stop immediately! This is unheard of in Denmark.

“If the CCP does not like our democracy, then they should just leave. I will ask Foreign Minister Villy Søvndal to explain before the Parliament Foreign Affairs Committee why this thing was allowed to happen, and of course, we will also discuss why similar things happened during President Hu Jintao's visit last year.”

“Again and again, the police have forced protesters to disperse simply because of an innocent banner. Skipper said that he would ask Mr. Bødskov what really happened; who is issuing these orders to the police, what does freedom of speech and freedom of assembly means in Denmark, and why are the police stopping people from expressing their views?”