(Minghui.org) I was arrested in 2012 for practicing and clarifying the truth about Falun Gong. Even though China's Constitution guarantees its citizens the freedom of speech and spiritual belief, I was sent to Masanjia Women's Forced Labor Camp in Shenyang, Liaoning Province for practicing Falun Gong. The guards ordered me to renounce the practice in writing, but I refused. As a result, I was tortured.

After I started practicing Falun Gong, I became cheerful, pleasant, and kinder. I no longer held grudges when people took advantage of me. I have Teacher and Falun Gong to thank. It is such a wonderful cultivation practice that has attracted so many people around the world. Why must China turn a blind eye to its benefits and suppress those who practice it? Why did China trump up so many lies about my Teacher? 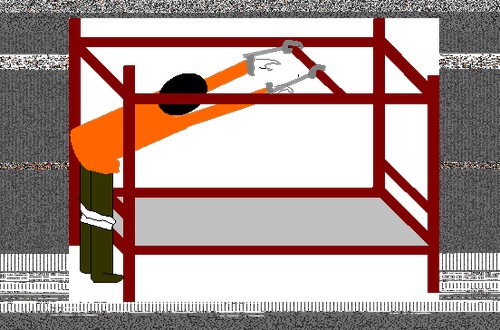 Illustration of the stretching torture 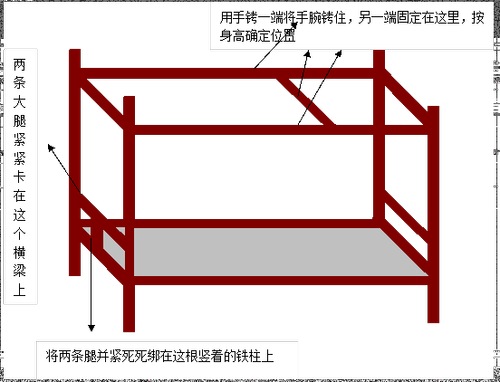 Illustration of the stretching bar

The "stretching bed" looks like an ordinary bunk bed made of steel. Some of us could barely walk for months after being subjected to this torture. We were handcuffed by our wrists, which were then affixed to the upper bunk, while our legs were tied to the lower bunk. The legs are tied so that the practitioner can't even wiggle. It hurt unbearably. The torturers then beat, struck, and kicked us in the arms every several minutes to inflict more pain. The pain was excruciating because our hands were handcuffed. Some of our arms remained numb for a year afterwards. An ordinary visitor would never know this bed could be used to inflict such pain. 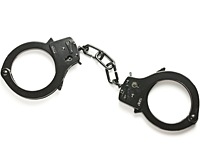 Handcuffs used by the guards

I witnessed dozens of Falun Gong practitioners being subjected to this torture during the year I was there, and some were tortured with it two or three times. Other practitioners would face additional torture after being subjected to the stretching torture, including forced-feeding, forced standing for extended periods of time, cleaning the toilets, or sleep deprivation. Some were shocked with electric batons and ended up covered with blue and purple bruises. Some were hung in the air, and their wrists swelled severely. Many of the victims were in their fifties and sixties.

Having been forced to renounce Falun Gong in writing, we were sent to the workroom if we were still relatively healthy. We worked during the day and were forced to watch hate propaganda films against Falun Gong after laboring. Practitioners were not allowed to speak to each other in the workrooms. We were dirty and tired, but we also faced a lot of verbal insults and punishment.

The non-practitioner inmates were victims, too. Those who did not know the truth about Falun Gong helped the guards torture us.

Those who were too old or sick to work, or were new to the prison, were kept upstairs. They were made to watch hate propaganda videos against Falun Gong, and sometimes Zhang Lili would give speeches to slander it. Wang Wenhong, a former Falun Gong practitioner who had "enlightened" along an evil path, sometimes also give speeches. Those who refused to renounce Falun Gong were transferred to the torture room.

The guards often made us answer surveys designed to insult Teacher. We were punished if we didn't write what they wanted to read. We were also punished if we refused to slander Teacher verbally or even hesitated for a few seconds, or if we refused to recite the prison rules. The punishments included beatings, verbal insults, standing still for long periods, and the stretching torture. We were constantly reminded not to tell the truth because telling the truth would get us into trouble.

Several male guards were eventually dispatched to help torture us for several months. We were made to slander Falun Gong from time to time. It felt as though we had been brought back to the time of the Cultural Revolution.

“Letting Go of Resentment and Turning My Life Around (Photo)”