(Minghui.org) More and more Chinese tourists have recently declared their resignation from the Chinese Communist Party (CCP) and its affiliated organizations when they travel abroad. This also occurred in downtown Frankfurt on Saturday, May 21, 2013, when Chinese tourists learned the facts about Falun Gong and the persecution at the Falun Dafa Day celebrations, and asked practitioners to help them withdraw from the CCP organizations. 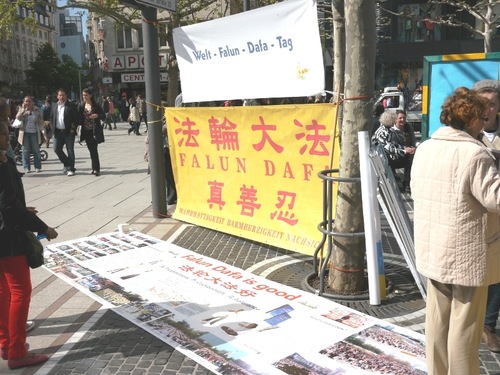 Passersby paused to look and listen. A young Chinese couple who sat on a bench behind the practitioners was drawn to the peaceful and unusual scene in front of them. A practitioner gave them Falun Gong flyers and spoke with them. They were tourists from China. They quietly listened and nodded.

The practitioner told them about Falun Dafa's widespread dissemination around the world and the staged Tiananmen Square "self-immolation incident," which was orchestrated by the CCP to frame Falun Gong, as well as about the grand trend of quitting the CCP. The couple finally agreed to withdraw from the Youth League, which is one of the CCP organizations, and thanked the practitioner for letting them know.

At noon, a young man from Beijing passed by. When a practitioner gave him some truth clarification materials, the man said he had heard all about it. He could get online in China via software that circumvents the Internet blockade. When the practitioner asked him if he had ever joined any CCP organizations, he said he once belonged to the Young Pioneers. When he heard the practitioner say that it would be good for him to withdraw from it to ensure his own safety, he was happy to withdraw.

A young couple from Henan Province took a photo of the display boards. When a practitioner gave them a flyer, they looked frightened and said they didn't want to get involved in politics. They asked for directions to the river and wanted to leave.

The practitioner pointed out the way while telling them that quitting the CCP was not getting political, that, on the contrary, it helps people break free from the CCP's dirty politics. "Atheism has destroyed the moral standards in China. People hate each other, and what they eat and drink are toxic. Perhaps the natural and man-made disasters in China are heaven's compassionate warning. Heaven will eliminate the CCP, and good people should not be implicated. Falun Gong practitioners ask for nothing in return, they only want to see people be safe."

The young couple finally understood the meaning of quitting the CCP and declared their withdrawals from the Youth League.