(Minghui.org) On May 18, more than 7,000 Falun Gong practitioners from 53 countries held a grand march in Manhattan, New York, celebrating the 14th World Falun Dafa Day. Many people watched as the march went through Chinatown. 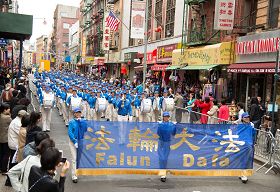 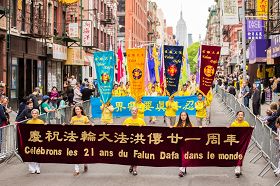 The grand march in Chinatown, Manhattan

Mr. Wang is from Fuzhou, China. He said: “It is great that Falun Gong held such a great march. I don't live here, so this is my first time to see them. I want to see how long the march is. I heard about Falun Gong, and they have made a good impression on me. They are righteous, not like what the Communist Party says. The Communist Party tries to control everybody's life. The personal belief is really not their business, and they should not control what people believe in. I have seen Falun Gong flyers, which talk about the Communist Party's organ harvesting. It is really horrible.”

Ms. Li came to the U.S. from Henan, China, a few months ago. She said: “I heard about Falun Gong when I was in China. I also heard about the organ harvesting. The Communist Party should not do this. Several friends of mine practice Falun Gong, and they are really good people. People should have freedom to do it. Why does the Communist Party suppress it? You cannot control people's belief. The Communist Party tries to control everything. That is not good. You see, the march is coming. It is really great. You cannot see this in China. I didn't know that there are so many people practicing Falun Gong. It is really good to be here. This is a free society. It is not safe in China. The air is polluted, and the food is poisoned. Falun Gong practitioners have freedom here. They have an uplifting spirit, which cannot be destroyed by the Communist Party.”

A Chinese student who came here eight months ago was amazed by the march. He said: “This is great. It is great. I feel happy for them. This is my first time to see their march. I heard about Falun Gong. The Communist Party should not persecute them. A political party should not try to control people's thoughts.” He added: “Falun Gong is good. I knew that when I was in high school. The world will be a better place, if everybody believes in Truthfulness, Compassion, and Forbearance.”

Mr. Jiang has a small business in Chinatown. She said: “I've been here more than 10 years. This is a free society. I am proud of these Falun Gong practitioners, who held such a great march. I don't quite know about Falun Gong, but I know that the persecution of it is wrong. The Communist Party has been doing a lot of wrong deeds. There is no freedom of speech in China. Chinese people don't have access to the truth. People don't have the equal opportunities in China either. Poor people cannot find jobs. They cannot speak for themselves. America is good. People can believe whatever they want. I was not happy under the Communist Party's governing. Everything that the Chinese newspapers say is a lie. I feel much better here.”

Mrs. Jiang is a Christian now. “Due to the Communist Party's brainwashing, I did not believe in anything before. But now, I believe in God. It is great to have a belief, just like Falun Gong,” she said.