(Minghui.org) Today's news from China includes incidents of persecution that took place in 5 cities or counties in 5 provinces. According to this report, 5 practitioners were subjected to mistreatment during detention, and one practitioner died. 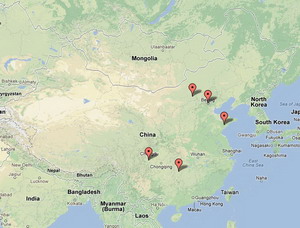 Mr. Qin Wei was an art teacher in Beijing Bayi High School. On October 26, 2012, he was arrested at home by officers from the Haidian Police Station while tutoring two students. Later on, he was sentenced to two and a half years of forced labor. He has been detained in Division No. 5 of Xinan Forced Labor Camp in Beijing.

Previously, Mr. Qin was detained in the Tuanhe Forced Labor Camp in 2000 for 18 months. In 2004, he was sentenced to five years of incarceration and detained in the Chadian Men's Prison in Beijing. He was subjected to forced labor and tortured for a long time. He was also deprived of sleep for 15 consecutive days.

Ms. Cao Zhihua was sentenced to three years in prison. She has been detained in the Shandong Women's Prison.

Ms. He Qi and Mr. Xie Kaijun from Dongpo District, Meishan, were taken to the Taihe Town Police Station on January 21, 2013. They were handcuffed to an iron chair and interrogated individually. When Mr. Xie refused to disclose his name, he was slapped on the face by a police officer.

Later on, both practitioners were sent to the Dongpo Lockup Center, where they were detained for 15 days. They were released on February 5, 2013.

After July 20, 1999, when the communist regime began to persecute Falun Gong practitioners, Ms. Zhang Jiaoyu was detained many times for going to Beijing to appeal for the right to practice Falun Gong. In February 2002, she was arrested and sent to the Baimalong Women's Forced Labor Camp in Zhuzhou for a one-year term. Her heart disease relapsed due to the persecution experienced in the labor camp. Ms. Zhang could not recover completely even after being released.

Ms. Zhang was arrested again in 2008. Later on, she was often harassed by the authorities. Her health continued to deteriorate as a result of the long-term persecution. Ms. Zhang passed away at the age of 59, shortly before January 1, 2013.