(Minghui.org) Today's news from China includes incidents of persecution that took place in 7 cities or counties in 6 provinces. According to this report, 4 practitioners were subjected to mistreatment during detention, and at least 7 practitioners were illegally arrested. 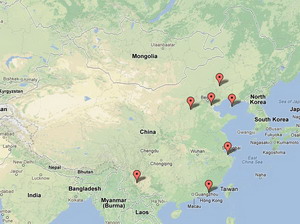 On the night of February 23, 2013, Ms. Liu Shuqin and Ms. Wang Zhiping from Nankai District, Tianjin were arrested at Anshan West Road. Their homes were ransacked. The two practitioners are being detained in the Xuefujie Police Station and the Wanxing Police Station.

Ms. Bai Ruifang was arrested on July 4, 2012 because she distributed Falun Gong materials. She was detained in the Xinzhou Detention Center. On January 30, 2013, the Wuzhai County Court sentenced her to three years in prison.

Ms. Zhao Shuli lives in Luze Village, Changan Town, Haining City, Zhejiang Province. She was arrested and detained by the 610 Office and the Domestic Security Division. Her home was ransacked. During the period of residential surveillance, the police threatened and harassed her husband and child. The Political and Legal Affairs Committee goaded her husband into divorcing her. Ms. Zhao is now homeless and destitute.

Mr. Luo Jiangping from Miyi, Sichuan Province, was reported to police and arrested at Nanhua, Yunan Province while she was distributing Falun Gong materials this year. She was sentenced and sent to the Yunnan First Prison. She endures brutal torture including being handcuffed and shackled and forced to do slave labor.

Mr. Wang Baoyu from Dalian Developing District, 74, was arrested by officers from Huanghailu Police Station on the night of February 23, 2013 while hanging Falun Gong banners in the Dongshan Residential Area in Daliang Developing District.

Mr. Wang and Ms. Chen are being detained in the Shantou Police Department. Other practitioners have been released.