(Clearwisdom.net) On July 4, 2012, the 236th anniversary of the US Independence Day, “Wawa Welcome America!” festivals took place in Philadelphia, the birthplace of the Declaration of Independence. For the 12th consecutive year, Falun Gong practitioners were invited to participate in this event, which is one of the largest July 4th celebrations in the nation. 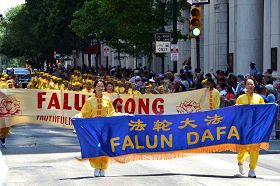 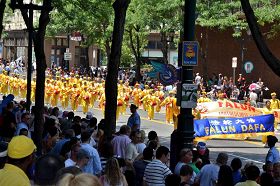 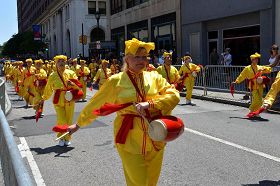 At 10 a.m., at the steps of the Independence Hall, thousands of local residents and tourists attended the “Celebration of Freedom” ceremony and watched a live concert. Mayor Michael Nutter gave a speech and presented citizenship documents to 13 new normalized citizens.

After the ceremony, the grand parade started with this year’s theme, “Hero’s Salute”, honoring the 10th Anniversary of 9/11 – The United States Military, veterans, firefighters and police officers. Over 5,000 participants from more than 100 groups and organizations marched in the historic streets of Philly. The waist drum troupe formed by dozens of Falun Gong practitioners in traditional yellow practice suits were very eye-catching. Their resounding drum beats, lively rhythm, and elegant formation earned warm applause from the crowd. 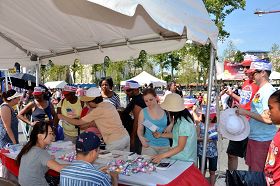 The Falun Gong booth was packed with visitors 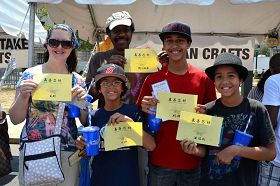 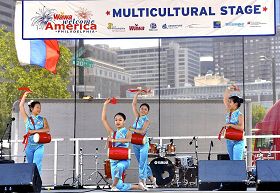 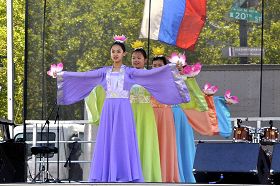 After the parade, the celebration center moved to the Party on the Parkway, featuring a free concert, numerous vendor booths with all kinds of entertainment activities, and finally fireworks.

A middle school student named Alice enjoyed the lotus flower origami demonstration and learned about Falun Gong and the persecution. She said: “People have the right to choose their belief. It is not acceptable to persecute anyone for their beliefs. We, people in US, are very fortunate. [We] should especially let young people know this [persecution].”