At 3:00 a.m. on June 10, two days after its registration, the HKYCA dispatched dozens of people to invade the Hung Hom site that practitioners have used in the past ten years to display truth-clarifying materials about Falun Dafa. The HKYCA displayed many banners which defamed Falun Dafa and also played loud recordings which attacked the practice. 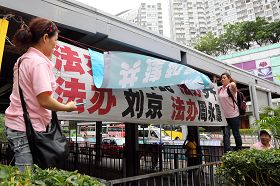 In pink shirts, members of Hong Kong Youth Care Association tried to use a slanderous banner to cover a banner of local Falun Gong practitioners.

In the morning of June 19, a group of people came to the site again to harass practitioners. Shortly after practitioners called 911 for help, these people called in about 10 strong men to encircle the site and try to interfere with practitioners’ activities. 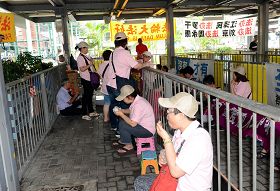 Over 10 HKYCA members in pink shirts came to a Falun Gong site. They displayed many slanderous banners, trying to start a conflict. 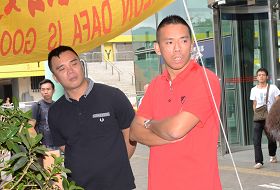 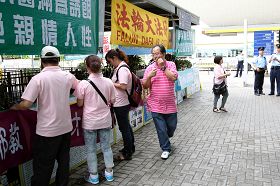 Lin Guo-An (the person in a striped pink shirt) of HKYCA directed the harassment. His name is identical to a council member of Jingganshan City, China. According a source, he is a CCP agent dispatched by the Political and Legislative Committee.

Hong Kong practitioners believe that this series of attacks were backed by the CCP. Mrs. Zhang said: “They are from a large organization, and some members spoke Mandarin [Editor's note: The official dialect used in Mainland China. Native Hong Kong residents do not speak Mandarin]. Apparently they were dispatched by the CCP. We also heard someone saying: ‘Act now, we will pay later.’ In addition, their banners and shirts have the HKYCA logo.

Democratic Party community director Chow Wai Tung investigated the Hung Hom site and carefully reviewed the banners and posters. Though those materials did not mention Falun Gong by name, but they all slandered the practice. In addition, he noted a few suspicious issues:

Chow suspects that HKYCA is a CCP-backed agency with a mission to create problems before Hu Jintao’s visit (China's president).

Chow stated: “CCP is the real cult. It has killed so many innocent people and maintained a nationwide brainwashing campaign. Why don’t these people hold a protest outside the Mainland Liaison Office? Why do they create problems at Falun Gong information sites? It is so obvious that they were sent here by the CCP.” 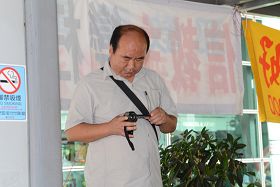 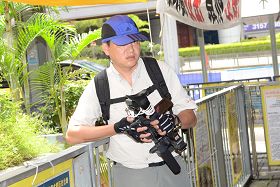 On July 2, as it was getting dark at Lok Ma Chau, HKYCA deputy chair Lin Guoxiong directed about 10 people to block Falun Gong banners using slanderous banners. When practitioners told them that such acts were not legal, they hung their banners above the practitioners’ banners.

On July 4, the so-called HKYCA attacked with the site again with equipment, including a sharp knife. Around 8:45 p.m., a female thug cursed at a Falun Gong practitioner. When several reporters were taking photos of the scene, Tsai Wenwen, a New Tang Dynasty TV reporter, noticed that another female thug several feet away had a six-inch long knife in her hand. It was very dangerous as it was concealed from those around her. So Tsai shouted: “Knife!” Another thug wearing a striped shirt took over the knife for a short time while cursing at Tsai. However, on-site police officers were indifferent to what happened in the daylight. 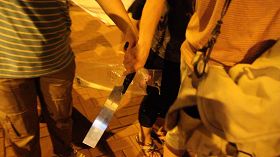 A female thug in a striped shirt took over a knife from another thug, preparing to use it to threaten a reporter 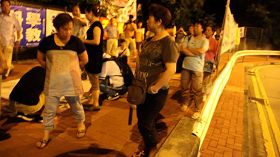 Falun Gong site coordinator Mrs. Chang condemned the attack. She said that Lok Ma Chau is the first tourist site that Mainland Chinese people visit when they come to Hong Kong, and this is the reason that these thugs harassed this Falun Gong truth-clarifying site. She also pointed out that police officers on site took no action to stop the violence. “On July 2, over 10 people came here to hang up many slanderous banners. Today, they hung up banners at almost every empty space. When they took out a knife, a police officer just called it a saw. Either way, it was a sharp weapon. When they were harassing us, they used it to intimidate us and reporters. When we reported to police officers, the response was ‘they did not injure anyone.’ This was unbelievable.”

Regarding this incident, Legislative Council member Nelson Wong was very concerned. He said: “I think this is a big thing as it involved people using a weapon to intimidate others and interfere with reporting. This is a felony. In addition, the police's behavior was not acceptable.” He promised to investigate this case to stop such violence.

Mrs. Fan said: “There was a group of tourists in their 30s. They ignored the megaphone broadcast by the HKYCA and talked to us to learn about the truth about the persecution. One of them then held a ‘Falun Dafa is good’ poster and invited a practitioner to take a photo with him. He even shouted loudly 'Falun Dafa is good!'”