Israel: "The Art of Zhen, Shan, Ren" Presented at Hall of Culture in Or Yehuda (Photos)

(Minghui.org) "What is the relation between a painting of a young woman sitting calmly in meditation and a painting of a woman mourning the death of her husband? How, and why, do scenes of torture connect to heavenly scenes and meditation exercises?" asked Ms. Hanny Levin, treasurer of The Art of Zhen, Shan, Ren International Exhibition, in her speech given at the recent opening of the exhibition at the Hall of Culture in the Israeli town of Or Yehuda.

People listen to the opening remarks at The Art of Zhen, Shan, Ren International Exhibition in Or Yehuda, Israel.

"Zhen, Shan, Ren" means Truthfulness, Compassion, Forbearance in Chinese. The exhibition is a collection of paintings by a group of artists in realistic style and Chinese classical style of painting. The artwork displays stories about Falun Gong spiritual practice (also known as Falun Dafa), which is based on the principles of Truthfulness, Compassion and Forbearance. Falun Gong is practiced openly and freely throughout the world, including in Israel; however, it is severely persecuted by the communist regime in China.

The painters, all of whom practice Falun Gong, are committed to maintaining a high moral standard in their daily lives in line with the principles of Truthfulness, Compassion and Forbearance. The aim of the exhibition is to inform the world about the 13-year, ongoing persecution initiated by the Chinese Communist Party, as well as the benefits of the practice. Most of the contributing artists are Chinese in origin, now living in the West.

Ms. Rina Dor, general manager of the MY company in Or Yehuda, gave a warm welcome to the exhibition organizers. MY is involved in the areas of culture, knowledge, and leisure in Or Yehuda.

After the greetings, the audience viewed an inspiring film in which the participating artists shared what had motivated them to create the paintings--for example, their wish to express their personal experiences while learning the practice, and the need to expose the crimes against humanity committed by the Chinese regime against innocent citizens.

An additional goal motivating the artists was to help raise the level of morality around the world. According to the artists, living with the values of Truthfulness, Compassion and Forbearance helps one prevail under any circumstances, even the most difficult, life-threatening ones.

Prior to the start of the film, the hall was alive with voices, but once the movie started, the audience sat spellbound, listening to the artists speak. Afterward, the audience was invited to join a guided tour of the exhibition. 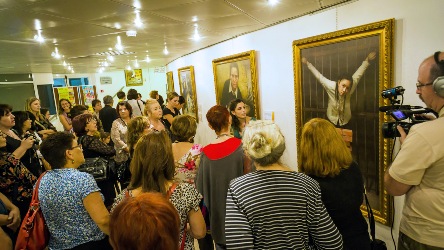 People view the artwork during a guided tour of The Art of Zhen, Shan, Ren International Exhibition in Or Yehuda, Israel.

The tour was highly interactive. People asked questions and discussion followed. Words like “harmony,” “balance,” “tranquility,” and “peace” were heard as people contemplated the paintings “In Harmony” and “Illumination.”

Phrases such as "we shall not be chained," "fidelity to higher principles," "determination," and "choosing good and opposing evil" were uttered as viewers discussed the paintings “Faith,” “A Tragedy in China,” and “Uncompromising Courage.”

The paintings touched the viewers deeply, and people also expressed great interest in learning about the practice of Falun Gong. The story of the ruthless persecution taking place in China, together with the artwork documenting the persecution, opened people's hearts to caring and embracing a higher realm. Phrases such as, "The world should be informed of what's going on there [in China]" and "The story of Falun Dafa should be public knowledge," were heard among the public.

Ms. Hanna, a volunteer in the Or Yehuda Culture & Sports Youth Center, expressed shock at the stories of the persecution depicted in the paintings. She had never heard of Falun Dafa prior to this event. She said she felt the paintings reflected Dafa practitioners' determination to clarify the truth and to live by it. The artwork made her more aware of the problems existing in the world, she said, and the message she derived from the exhibition was to not give up and to keep up the fight for a better world.

Ms. Hanna Pizzuati-Yosef, manager of the Department of Culture in Or Yehuda, said: "The exhibition is very powerful. The impressions continue to accompany you when you leave." She believes the message of the exhibition should be publicized around the world. "It's important that we take even the smallest action and not just sit on the fence. We will pass on the message to our friends and ask them to forward it on," she said.