(Minghui.org) On November 7, the International Society of Human Rights located in Germany held a press conference in Dusseldorf, calling upon the German media and public to pay more attention to human rights violations in China. The speakers pointed out that the solution is to end the Chinese Communist Party's (CCP) tyranny. The speakers condemned the CCP's harvesting organs from living Falun Gong practitioners. The International Society of Human Rights has chambers in more than 30 countries. It was the first time that such an European human rights organization has publicly condemned the organ harvesting in China. 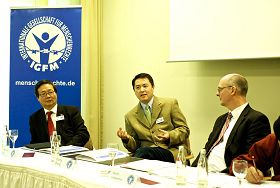 Zhang Erping also discussed actions that the governments of several countries have taken to stop the organ harvesting. For example, in June 2011 the U.S. government added a new question to the non-immigration visa application form: “Have you ever been directly involved in the coercive transplantation of human organs or bodily tissue.” In April 2012, Israeli legislators passed a law to prohibit “organ transplantation travel”, and prohibited insurance companies from covering the cost of Israel citizens' organ transplantation conducted in other countries.

Ng said that five political parties in the German Parliament held a hearing on the organ harvesting issue, and as far as he knows, Chancellor Angela Merkel is also aware of it. However, the German government has not yet made a public stance on the issue.

Zhang Erping and Manyan Ng called upon the German government to recognize the evil nature of the CCP, and to break its silence and condemn the organ harvesting, a crime against humanity.

“What to Focus On After Fellow Practitioners Are Successfully Rescued”