(Clearwisdom.net) At around 8 a.m. on September 1, 2011, Falun Gong practitioner Dr. Zhou Zaitian from Yanjiao Town, Sanhe City, Hebei Province was treating a patient in his clinic. Suddenly three cars and more than 20 people, including some town CCP personnel and officers from the police station, rushed into the clinic, arrested Dr. Zhou and sent him to Langfang City Brainwashing Center. Dr. Zhou has been arrested and persecuted many times by the CCP for continuing in his faith.

Dr. Zhou has been working as a rural doctor for 37 years. He was put into a brainwashing center in December 2000, April 2001, and September 2001. He was arrested in 2006 and sentenced to three and a half years in 2007. During the time he was in jail, the health department suspended his license to practice medicine. As a result, Dr. Zhou could not work after being released.

Police officer Li Liandi and others from Yanjiao Police Station, Sanhe City arrested Dr. Zhou in 2007 and he was put on trial in a Sanhe City Court on April 5, 2007. On the day of the trial, police officers guarded several nearby streets and several dozen armed police were on duty. Many people attended the hearing, but they were all police officers and 610 Office members. The court did not notify Dr. Zhou's family.

Dr. Zhou was wearing handcuffs and leg irons. He was extremely weak and close to collapsing. As a result of many kinds of torture by guards at the detention center, his weight dropped from 139 lb. to 93 lb. Dr. Zhou did not have a lawyer and he wrote a two page plea for himself.

Mistreated at a Detention Center

When illegally detained at the detention center, Dr. Zhou was subjected to many kinds of brutal tortures, including:

(1) Slapped with shoes - Thugs beat him with new shoes made of hard plastic. Dr. Zhou was beaten on both sides of his face dozens of times. The next day, Dr. Zhou's face was badly swollen, and his eyes were almost closed.

(2) Suffocation - Thugs suddenly covered Dr. Zhou's head with a plastic bag and he quickly started to suffocate. Four of them held him down so that he could not move. Dr. Zhou struggled and broke the plastic bag so that he was able to breathe. This was done twice. 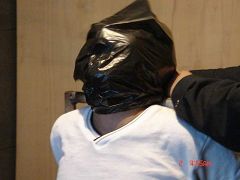 (3) Head immersed into water - Thugs filled a big container with dirty water, and forcibly held Dr. Zhou's head in it. After one minute, his head was pulled out of the water and then immersed again. This was done many times.

(4) Beaten and kicked - Several thugs took turns beating and kicking Dr. Zhou. They used the backs of their fists to hit Dr. Zhou's head and called it “hitting a walnut.” A guard encouraged inmates to "Take care of him [Dr. Zhou]."

(5) Restricted use of a toilet - When defecating, someone quickly counted from 1 to 100 by his side. After about one minute, he had to stop using the toilet and leave. This lasted for 18 hours.

In the end, Dr. Zhou's hair turned white and two of his teeth fell out. He was also forced to do hard labor for more than ten hours every day as they tortured him both mentally and physically.

Dr. Zhou was treating a patient when he was arrested in 2007. Three plainclothes officers came with a black car. They blocked the door and arrested Dr. Zhou. Dr. Zhou knew one of the three people, who was a captain. In the afternoon after Dr. Zhou was arrested, several police came and ransacked Dr. Zhou's home and took away his son's computer and other personal belongings. They were finally given back after six months.

They issued an arrest warrant after Dr. Zhou had been arrested for a month, but they did not have enough evidence. After Dr. Zhou was transferred to the 610 Office, they again ransacked Dr. Zhou's home. Dr. Zhou's mother was 81 at the time and very healthy, but she had never seen anything like this and was so frightened that she suffered dementia as a result. She missed her son terribly and passed away after one year. She was murmuring her son's name up until she passed away, but never got to see him again.

Dr. Zhou's uncle was a retired teacher and was 60 years old. His heart was on his right side instead of the left like most people. He missed Dr. Zhou a lot after his arrest, and had a heart attack three months later. He'd had heart attacks two times previously, but got better quickly after being treated by Dr. Zhou. Because Dr. Zhou was arrested, this time he had another doctor who did not know his heart was on the right side. The doctor tried to hear the heart on the left side and could not, so he thought he was already dead. A lot of valuable time was wasted and he eventually passed away.

Mistreatment at the Prison

Dr. Zhou was taken to Jidong Prison, located near Nanbao Salt Company, Jiantuozi, Fengnan District, Tangshan City, Hebei Province. He was put in Squadron 10, Brigade 2, Division 2. Before that, he was first sent to Baoding City Jail but was rejected because he was a Falun Gong practitioner. The distance there and back was about 250 miles and it took an entire day. He was wearing handcuffs and leg irons the whole time and no one gave him anything to eat.

On July 23, 2007, Dr. Zhou was sent to Jidong Prison with his wrists handcuffed and his feet chained. He was assigned to Division 2, directly sent to the strictly-controlled group, and detained in a solitary confinement cell. The cell was less than three square meters (about 32 square ft) and contained many mosquitoes. With a small window of about 20 square centimeters (about 3 square inches), the room's temperature was about 45 degrees C (about 113 degrees F). Water for drinking and washing was restricted. Six people took turns monitoring Dr. Zhou in three shifts for five days. He had no physical freedom and his family members were not allowed to visit during his strictly-controlled detention.

After returning from the strictly-controlled group to the cell, Dr. Zhou was closely monitored and followed by three inmates every day. They prevented him from speaking with others, and limited his physical freedom. They also followed him when he went to the bathroom.

On the evening of July 26, 2007, the police took away all of Dr. Zhou's books, three diaries, pencils, and paper. On the morning of July 27th, captain Wu took away his pen. Dr. Zhou told Wu, “I wrote in my letter, whoever withholds my letter will be like a criminal killing an innocent person.” Wu said, “I didn't see that. I got the letter and tore it up.”

Then, they increased the number of monitors and closely watched Dr. Zhou 24 hours a day. They disallowed anyone from talking to Dr. Zhou and reported to the captain if anyone did.

On July 28, 2007, Dr. Zhou was sent to the strictly controlled group and placed in a solitary confinement cell. The 30cm by 20cm window was closed the whole time and it was 43 degrees C (109.4 degrees F). Dr. Zhou was handcuffed behind his back and forced to stand facing a wall for 16 hours per day, from 6:00 a.m. to 10:00 p.m. Six inmates took turns in three shifts to monitor him, and when he squatted down or sat down, the inmates started swearing at him and beating him. Dr. Zhou's hands were handcuffed and he could not wipe the sweat off. All of his clothes were soaked with sweat. Even the pad on the ground would be soaked with sweat in two hours.

During the afternoon interrogation on July 28, 2007, Chen Kai from the Education Section slapped Dr. Zhou in the face more than twenty times. Chen Kai weighed about 90 kilograms (198 lb.) and he slapped Dr. Zhou so hard that Dr. Zhou fell down and his glasses fell off. His hearing became impaired from this beating. The inmates also beat Dr. Zhou. His face was swollen and he was bleeding from his mouth and had bruises on his body. When another inmate hit Dr. Zhou hard on the chest, he fell down and had difficulty breathing.

Dr. Zhou went on a hunger strike for two days and they did not give him any water for two days. He only had less than 50ml of urine in 24 hours and only defecated once in a week. He stopped sweating completely and his legs were swollen. On the third day, the captain of the strictly-controlled group told Dr. Zhou, “If you continue your hunger strike, we will force-feed you tomorrow. Force-feeding you a bag of milk powder will cost you 300 yuan. You will wish you were dead.”

Mr Zhou started eating again, but each meal was just a bun. There was no water until after the bun and sometimes Dr. Zhou would have to throw away half of it because it was too dry to swallow. He was tortured in more than 10 ways during the 16 days and his weight dropped by 22 lb. As part of the torture, he was not allowed to wash himself or brush his teeth for 17 days. He was forced to march and they hit his head with a wooden stick and forced him to eat hot pepper if his posture was just a bit off. He was also forced to stand directly under the hot sun for long periods.

During the one and a half years from the time Dr. Zhou was out of the strictly-controlled group to the time he was released, he was not allowed a single phone call. All of his letters were withheld. He was only allowed to mail out new year cards. Everyone had to buy new year cards and it was five yuan per card.

Chen Kai is the Deputy Director of the Education Section, Division 2, Jidong Jail, Hebei Province. He is responsible for persecuting Falun Gong practitioners.

In the past two years, Dr. Zhou has been harassed many times with phone calls or someone coming to his home. Now he has again been taken to a brainwashing center and his family and friends are worried about his safety.

More people and phone numbers can be found in the original Chinese text.