(Clearwisdom.net) September 19-26, 2011, world leaders converged in New York as the United Nations General Assembly held its 66th session of high-level meetings. During this time, Falun Gong practitioners in New York gathered outside the United Nations to expose the brutal persecution of Falun Gong practitioners by the Chinese Communist Party (CCP), to call upon the international community to show concern over the human rights conditions of the practitioners in China, and to work with concerted effort to put an end to the 12-year-long persecution. 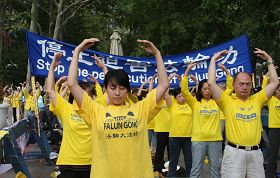 During the U.N. Summit, practitioners in New York gather outside the United Nations to call for an end to the 12-year persecution

Practitioners arrived at the gathering area at 9:00 a.m. every day. They hung up banners and began doing the exercises. Banners reading “Falun Dafa Is Great,” “Stop Persecuting Falun Gong,” “People Believing in Truthfulness-Compassion-Forbearance Are Subjected to Brutal Persecution in China” in both Chinese and English conveyed messages to the passersby that Falun Gong practitioners are being persecuted in China. Practitioners in yellow T-shirts performed the exercises and sat in mediation to the accompaniment of peaceful exercise music. 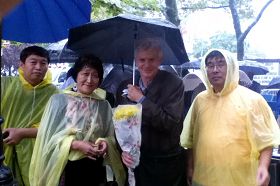 Former Canadian Secretary of State for Asia-Pacific David Kilgour arrives at the Falun Gong practitioners' protest area, presenting a bouquet of flowers to the practitioners and expressing his support for practitioners' efforts to work against the persecution

On September 23, former Canadian Secretary of State for Asia-Pacific David Kilgour arrived at the practitioners' protest area to present them with a bouquet of flowers and make a speech to express his support for Falun Gong.

On the afternoon of September 26, practitioners held another press conference to expose the CCP's genocidal persecution of Falun Gong practitioners and call upon the international community to show concern, to stand with the righteous, and to work together to stop the ongoing brutal persecution.

Practitioner Dr. Wang Wenyi explained at the press conference what Falun Gong is and told about the popularity of Falun Gong in China and the CCP's persecution of Falun Gong.

Ms. Ma Chunmei, who came to the United States from China more than two years ago, recounted how she was arrested, subjected to forced labor, and tortured in China.

While she was speaking of her ordeal, a nearby protest group from Eritrea, East Africa, became quiet, and took Falun Gong flyers. A police officer told a practitioner, “I wish every group would be like you, quiet and peaceful.”

Falun Gong practitioners' peacefulness also attracted three staff members working at the U.S. Presidential Office who came to attend the United Nations' summit from Washington, DC. They stopped to speak with practitioners to learn more about Falun Gong. They praised the practitioners, saying, “This is the best protest group that we have ever seen.”