(Clearwisdom.net) People express their admiration and gratitude toward their mothers on Mother’s Day. Ms. Huang Yuhua, who jointly with her mother-in-law won the title “Mother-and-Daughter-in-law of the Century,” prepared gifts for her mother-in-law and was also going to present a certificate to her. She said that her mother-in-law is an extraordinary woman. She also professed that Falun Gong has played a critical role in helping her become the person she is.

Ms. Huang is an outgoing person and actively participates in community service. She and her husband own a car dealership. She is a board member of Taizhong Automobile Trade Workers’ Union and a standing director of the Women’s Association. The Women’s association and the Community Service Station nominated her for this award. 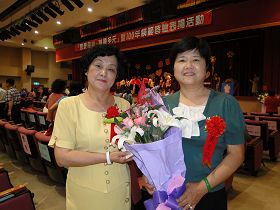 Huang Yuhua (right) and a friend at the award ceremony

“We spoke with many people, and the consensus is that you are a very successful person in terms of caring for your mother-in-law, your husband and your children, and that’s why you were nominated,” said the director of the Service Station. Huang Yuhua and her husband are busy at work, but they are very devoted to their mother-in-law. She said, “I am blessed with wisdom and honor because I practice Falun Gong!”

Ms. Huang began practicing Falun Gong in 2003. Her husband’s friend mailed a copy of Zhuan Falun to the couple, but she did not have time to read it. Later on when she visited her daughter in Canada she saw Falun Gong practitioners doing exercises in front of the Chinese consulate. However, she didn't join them for fear of the communist regime.

After returning to Taiwan, Ms. Huang was strolling on a nearby university campus with her husband one morning, and they heard the Falun Gong exercise music. Her husband was intrigued and decided to spend the next two months finding out more about the practice. He had practiced another qigong for more than a decade and was surprised to feel a very powerful energy field when doing the Falun Gong exercises, exactly as described in Zhuan Falun. He then realized that this is a high-level cultivation practice. Two days later he resolutely gave up everything he had previously learned and started practicing Falun Gong.

Several days later, during an alumni gathering Ms. Huang saw a former classmate who had been sick for many years was now glowing with health; it turned out she had been practicing Falun Gong for 18 months. This time she was convinced, and she began going with her husband to the local practice site and reading Falun Gong books. Soon, she experienced tremendous physical and moral improvements.

Ms. Huang used to make frequent visits to the doctor’s office. She often suffered from heatstroke during the summer and sought folk remedies. She was very sensitive. For example, if she inadvertently encountered a funeral procession she would immediately feel discomfort and would have to go to a temple in an attempt to drive away whatever was ailing her. She took Chinese medicine and dietary supplements five times a day with meals. Two of her three fridges at home were stocked with drugs and food supplements. Ms. Huang said, “I was making money with one hand and taking medications with the other.” Over time she showed symptoms of lead poisoning. Her complexion was dark, and black dots appeared on her face.

Falun Gong, however, gave Ms. Huang the health she always dreamed of without costing her a single penny. She is full of energy and runs up the stairs with a bounce in her step. “Now I get nauseated when I look at the stuff I used to take. If it wasn’t for Falun Gong, my liver and kidneys would have been destroyed, because I took such an enormous amount of drugs.” She also saved the government lots of money because she no longer needs healthcare benefits. Huang is a living testament to the incredible healing powers of Falun Gong.

Her husband has eight brothers and three sisters. His father passed away early, and his mother raised the children alone. Huang’s parents always taught her to respect and care for the elders, and she did. Her husband was always a dutiful son, so the mother-in-law chose to live with her and her husband.

Falun Gong practice, however, helped Ms. Huang to discover where she fell short. Prior to the practice she was kind, but she harbored discontent. Her mother-in-law always asked her husband to deal with matters large and small, making her feel left out and disgruntled that her mother-in-law was “hogging” her husband. Cultivation has since dissipated this feeling, and she truly cares for her mother-in-law from her heart. She is grateful toward her for having done such a great job bringing up her husband, and she is now benefiting from it. She said, “A woman is like a flax-seed that grows wherever it ends up, and my mother-in-law is the rich land that makes my life so wonderful.”

In the past, even though the eight sisters-in-law all offered to care for their mother-in-law, they were actually competing to see who showed the most filial piety. After practicing Falun Gong Ms. Huang changed her intentions and truly cared for others, and people sensed her sincerity. It spread over time, and some sisters-in-law who used to dislike her have changed their attitude. The sisters-in-law no longer just “get along,” but they actually put themselves in the other person’s shoes. They are also wiser in resolving conflicts among themselves and with their mother-in-law.

“After assimilating into Dafa, I am a more gracious and loving person,” said Ms. Huang. Her career is also thriving, and she is able to accomplish more without spending too much time.

“The Wonder of Dafa Fully Displayed Through Teacher's Immense Mercy”