(Clearwisdom.net) Falun Dafa practitioner Mr. Huang Cheng from Jinzhou City, Liaoning Province was brutally tortured by officials from Panjin Prison and Taihe Public Security Bureau in Jinzhou. Police tortured him by puncturing his fingers with large needles. He was tortured with various brutal methods, which resulted in his being in critical condition. On February 24, 2011, he died at the age of 56.

Mr. Huang Cheng was a former employee of Nuerhe Textile Factory in Jinzhou. He had numerous severe medical problems for years, but after learning Falun Gong, he benefited both physically and mentally, and all his illnesses disappeared. On July 20, 1999, when the Chinese Communist Party (CCP) began the persecution of Falun Gong, Mr. Huang was illegally arrested. Over the coming years he was detained 15 times and subjected to abuse at a police station, detention center, drug rehabilitation center, forced brainwashing centers, forced labor camps, and prison. He also had money extorted from him, was continually harassed, had many personal items confiscated, and was brutally tortured numerous times.

During Mr. Huang's sentence at Panjin Prison, the police offered other inmates incentives to torture him. They held Huang's hands to the wall and using ten large medical needles punctured his fingers between the nails and the flesh. This extremely painful torture caused blood to pour out.

In September 2009, Mr. Huang Cheng was in critical condition. The prison had to release him on bail for medical treatment. After Mr. Huang returned home, the Nuerhe Police Station constantly harassed him. The previous torture and constant harassment resulted in Mr. Huang's death.

The following is Mr. Huang Cheng's personal account of the torture he suffered before his untimely death.

I was taken to the Taihe Public Security Bureau, cuffed to an iron chair, and then left. They gave me nothing to eat for the rest of the day. When night fell, public security team leader Dai Yong and another three officers from the Taihe Public Security Bureau started torturing me. They flipped the iron chair upside down so that my head faced the ground. They wrapped electrical wire around me and used electric batons to shock and torture me for three hours continuously, until midnight. When they finally took me off the iron chair, the bones in both my hands were broken and a tendon in my left foot was exposed. They saw that I could no longer walk, so they ordered two people to take me to the Jinzhou No. 1 Detention Center. 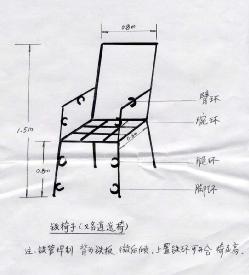 Diagram of the torture instrument, the iron chair. The device is made with iron pipes welded together. The back is made of iron plate. The practitioners’ body is completely fixed in the chair and cannot move.

In the detention center, even though I could not eat or take care of myself due to my injuries, officers from the Taihe Public Security Bureau handcuffed me to a metal hoop for several days. The officers used these particular hoops to cuff criminals facing the death penalty. Dai Yong often interrogated me at 2:00 to 3:00 a.m. He handcuffed me to the iron chair and didn't give me any water or let me sleep. He used to taunt me by saying, “I wouldn’t mind killing off all of you Falun Gong people. I am free to beat you to death without ever being held responsible.”

On August 4, 2008, the Taihe District Court in Jinzhou held an illegal trial for practitioners Liu Fengmei, Zhang Xiulan, Qu Chengye, and me, who were forced to attend. Defending us were eight attorneys from Beijing, who entered an innocent plea for us all. Attorneys Lin Xiaojian and Liu Jingshen, who were defending me, pointed out in court that the police had extracted a confession by torturing me during an interrogation. But Dai Yong from the Taihe Public Security Bureau wrote a written confirmation to the judge saying that he did not torture us, even though everyone in the court could see that my arms and legs were broken and I was crippled. The judges completely ignored my condition. The Taihe District Court in Jinzhou sentenced me to six years in prison.

On December 16, 2008, Dai Yong from the Taihe Public Security Bureau sent me to Panjin Prison in Liaoning Province. The prison officers checked the status of my health and then refused to accept me, as I was a liability. Dai Yong told the guards, “If he dies in prison, you won't be responsible for it at all. Just come to me.” Although I had very high blood pressure at that time, Panjin Prison officers still took me.

I was detained in the Fifth Team, First Prison Section. Team leader Wang Yanguang told me to give the other inmates haircuts, but I refused. He then sent me to the “education building,” which was specifically used to persecute Falun Dafa practitioners. The guards used eight high-voltage electric batons to shock me for one hour. I fainted and then they cut my hair.

When I arrived at the prison room, a practitioner gave me a copy of Zhuan Falun and a copy of Hong Yin, but a guard found them and asked who gave the books to me. I would not tell him. A team leader then said, “He will tell if we beat him.” Three or four guards came over and shocked me with electric batons for two hours. Then they asked the prisoners to step on my face, and they broke two of my teeth. The right side of my face still has the scar. One inmate with a conscience said, “I quit. You can't torture people like this. I don't want the bonus points you offered me.” (Bonus points are used to encourage prisoners to persecute Falun Dafa practitioners. One point means a one-day reduction of the sentence.) Some inmates could no longer bear the brutal torture. The guards had to go through a dozen inmates before one would keep torturing me.

During the New Year in 2009, Panjin Prison officials intensified their methods for “transforming” Falun Dafa practitioners. Prison instructor Hu from the First Prison Section, section chief Li Feng, team leader Yang Guanjun, Second Team leader Yu Zhong, criminals Meng Xianglin (from Panjin), Wang Suo (drug dealer from Dashiqiao), and others shocked me with eight electric batons to force me to be give up my belief in Truthfulness-Compassion-Forbearance. They covered my head so that I would not recognize them. They used electric batons to torture me twice every day for one to two hours each time. I fainted many times. After I woke up, they were afraid that my body would have scars due to the electric shocks. So they hung me up and did not give me any food or water at all for three days. For whatever reason, they believed that victims of their torture wouldn't develop scars if they did not eat or drink afterward. They then pulled me down and the team leader of the instruction section stripped off my clothes and cuffed me to the iron chair. He used the baton to shock me again. Team leader Yang Guanjun and prisoners Meng Xianglin and Wang Suo held my hands against the wall and used large medical needles to puncture all ten of my fingers. The flesh of my fingers clumped together. When they pulled the needle out, the flesh and a lot of blood came out with it. Because of the intense pain, I unconsciously hit my head on the wall. They said that this meant I had agreed to be “transformed.” The team leader of the instruction section said, “You agreed of your own accord. Nobody beat you at all.” Two officers then took my hands and forcibly pressed my fingerprints on the previously-prepared confession letter.

Yu Zhong, the team leader of the Second Team, frequently beat Falun Dafa practitioners and prisoners when he was drunk. He once used an electric baton on me for an hour without stopping. I could barely function and he still forced me to perform hard labor. Then out of the blue he just slapped my face.

In September 2009, I declared that the confession letter on which they pressed my fingerprints was invalid. Instruction section chief Hu brought out a few papers and wrote one word on each paper. Then he put the papers in the drawer. Since I am illiterate, I didn't know what he wrote. On the third day, chief Hu and team leader Yang Guanjun came to the workshop to do an inspection. I questioned Hu, “What did you write the other day?” Jiang Guanjun heard it and got very angry. He slapped my face over two hundred times right in the workshop. Hu tore up my solemn declaration and took me to the “education building.” A team leader then used a pair of handcuffs to hit my chest very hard. Guard Li Feng pulled my hands behind my back and Yang Guanjun started slapping my face again. I started vomiting. Later when the prisoners took me back to the prison room, I fainted. The next day they sent me to the prison hospital. In the hospital, I was still unconscious. They cuffed my hands to the bed and inserted the nasal feeding tube down my throat to brutally force-feed me for a month. I had symptoms of a stroke, my entire body was swollen, and hypertension had given me a high blood pressure reading of 270 and a low blood pressure of 170. I also developed a high fever of 40 degrees Celsius (104F). The prison charged me for the costs of the examination and the CT scan, and took it from the money that my family gave to me. I was hospitalized for about two months. I became paralyzed, and I could not take care of myself. I was released on bail for medical treatment on August 19, 2010 and went back home.

The day before I was released, guard Hu held a video camera to record me. He tried to get me to say that the CCP was good because it released me. I firmly refused, and they had to give up.

When I look back on the suffering I went through at Panjin Prison, it was like a hell on earth. Besides the brutal torture, the living conditions there were extremely poor. We could not get a sip of clean water over the course of a week. Instead we could only drink the rancid water, which came from soaking green beans. I would be lucky if I could wash my face every two weeks, much less ever having a shower or bath. When upper level authorities came to inspect the prison, the prison police hid practitioners and prisoners who had been brutally persecuted in the barn. During my two years of imprisonment and brutal persecution, my hair turned white and my appearance changed twenty years older due to the mistreatment.

When I returned home, police officers Zhang Zhongxin and Leng Jie from the Nuerhe Police Station in Jinzhou frequently came to my home to harass me. They didn't allow me to visit my relatives and friends, and restricted my personal freedom. Although I had returned home, I still frequently thought about the horrendous torture I suffered at Panjin Prison.