(Clearwisdom.net) Practitioner Ms. Lin Xiumei from Qing'an County, Heilongjiang Province was arrested on August 3, 2010, by officers from the Suihua Police Department's 610 Office in Beilin. Beilin District Court in Suihua secretly sentenced Ms. Lin to seven years in prison on February 23, 2011. She is being held in Section No. 9 of the Harbin Women's Prison.

In the prison, Ms. Lin was deprived of sleep every day. After one week of torture, she was in poor health. Her complexion was dark, and she became skinny. The prison officials told her family that she had to attend “intensified training” for three months and would not be allowed to see them until after June 2011.

Section No. 9 of the prison has been used to detain and persecute Falun Dafa practitioners since 2002. In 2004, this section was designated to be used to “transform” practitioners to make them give up their belief; now it is called the “intensified training section.” The prison provided special training to more than 70 personnel in July 2005 on how to brainwash and “transform” the practitioners. The persecution methods include forcing practitioners to stay outside in the freezing winter, locking them in solitary confinement, putting them in the isolated “patient” section, and forcing them to sit on a small stool for 15 hours a day in a fixed posture (in this torture, the skin and flesh on the victim's buttocks become rotten and festered). The officials also order the criminal inmates to torture practitioners by: beatings, sleep deprivation, prohibiting practitioners from taking a shower or changing clothes, stabbing practitioners with needles, inserting dirty socks into their mouths, stabbing toothpicks under the finger nails, hitting them in the breasts and groin, and hanging them up.

The solitary confinement area has the worst conditions. There are two layers of gates. The cell is very cold and damp, and there is no light or heat inside. There is only an iron chair, which is used as a torture instrument. Prison guards cuff the practitioner's hands behind the back, put shackles on the feet, and lock her to a ring fixed on the floor for 24 hours every day. The practitioner is only allowed to use the restroom at certain times. Only two meals are provided daily and usually consist of spoiled porridge. The practitioner is not allowed to take a shower or wash her clothes. There is no bedding in the cell. At night, the practitioner is left cold and hungry, with the body often shivering severely. The hands and feet swell up from being cuffed for a prolonged period, which is very painful. The suffering makes the practitioner unable to sleep for many nights.

Locked to a ring fixed on the ground (demonstration)

The third floor is used to hold targeted practitioners. These practitioners are isolated and locked up separately. The windows are covered up. These practitioners are not allowed to wash, change clothes or sleep on the beds; they are also under surveillance around the clock. They are forced to sit on a short stool for prolonged periods of time in the cold and are subjected to a wide variety of torture methods. 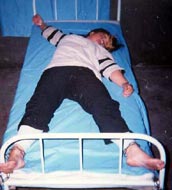 Cuffed on the bed (demonstration)

“Selection from Call for Articles: I “Flew” Away in Front of the Police”