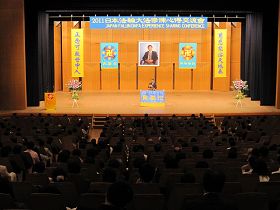 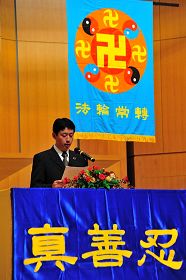 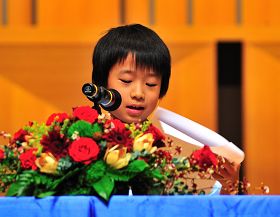 Mr. Chai and Ms. Ma, who obtained the Fa in 2007 and 2008 respectively, told how they and their families have benefited from practicing Falun Gong. After seeing the positive changes in them their family members became supportive of Falun Gong.

Ms. Lei and Mr. Li from Tokyo shared their experiences of clarifying the truth to people from all walks of life in Japanese society. Ms. Lei has spent a lot of time talking to government officials. She has printed out materials and held press conferences. She, together with local practitioners, presented The Art of Truthfulness-Compassion-Forbearance exhibition in Tokyo. Mr. Li often passes out materials on the street. He shared his experiences of improving his xinxing and eliminating attachments while clarifying the truth. He said, “Passing out materials on the street is probably the best way to clarify the truth to people, face to face. I often remind myself to save people with compassion and righteous thoughts, and let them see the beauty of Dafa through my behavior.”

Ms. Hasegawa from Hiroshima shared her experiences of promoting the Shen Yun Performing Arts performances. She said that she had fears at first when talking to people about Shen Yun. She described how she gradually realized the importance of Shen Yun, and eliminated her fear. When her attachment was gone, many people accepted what she had to say, and bought tickets. She felt that the sentient beings are waiting for it, and all we have to do is to follow Master's arrangements.

Ms. Quan from Tokyo also shared her experiences of promoting the Shen Yun performance to clubs and associations. She described how she makes friends with members of these associations, and how she told them about traditional Chinese culture and Shen Yun. She said, “I read the Fa and do exercises every day. Each time before I go somewhere to promote Shen Yun, I send forth righteous thoughts at home for 30 minutes. With strong righteous thoughts, things go smoothly. I have realized that every time I clarify the truth or promote Shen Yun, I need to overcome interference from the old forces and my own attachments and notions. Each time, I face a test of whether I believe in Master or not. When I follow Master's arrangement, the power of the Fa manifests.”

Ms. Yang from Osaka and Ms. Shen from Tochigi shared their experiences of making phone calls to China and convincing Chinese people to quit the communist party. Ms. Shen was jailed in China for two years due to the persecution of Falun Gong. She came to Japan in 2004, and started making phone calls to agents at the 610 Office and others who are involved in the persecution of Falun Gong. She said that the phone calls shock the evil people and help to rescue fellow practitioners.

Mizno, a young practitioner, read his experience sharing article in Chinese. He and his sister started practicing with their mother when they were very young. His mother teaches them by reading Hong Yin and Zhuan Falun in Chinese. They read the Fa and do exercises every day with their mother. They also help her to clarify the truth to their grandfather.

The conference successfully concluded at 5:00 p.m.

“Sharing – Why No Action Was Taken Under Cosmic Changes”