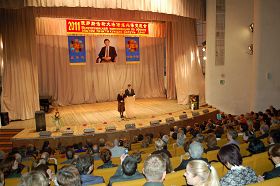 An 80-year-old Russian practitioner shared her experiences of clarifying the truth to Chinese workers at local construction sites. In the last few years, she often went to the construction sites to talk to the Chinese workers. Many of them were moved by her spirit and treated her as a friend. The person in charge of the site sometimes gives her rides to other sites so that she could talk to more workers. She cannot speak Chinese, but the Chinese translator at the construction site was moved by her story, and was willing to help her for free.

A Russian practitioner told a story of her child, who was badly burned. She read the Fa to the child every day. The burned skin was miraculously healed. She also talked about letting go of the attachment of sentimentality toward her children.

After the experience sharing, practitioners read the Fa together. 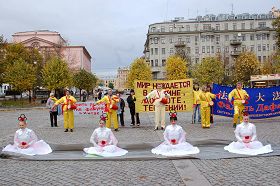 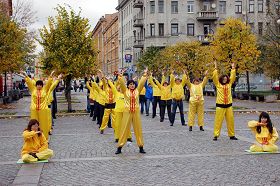 Before the conference, practitioners held activities on October 14 to raise awareness about Falun Gong including an exercise demonstration and music performances.