(Clearwisdom.net) A new wave of natural disasters have been sweeping China this summer, and many Chinese people have been donating money to disaster relief efforts. The situation brings to mind a similar call some twelve years ago when parts of China underwent massive flooding, and of the horrific changes of circumstance that soon came to many of the Falun Gong practitioners who responded to the call to donate.

Several major rivers in China flooded as a result of climate anomalies in 1998, and the Changjiang flood was the worst disaster since 1954. The official records reported that it caused a human loss of more than 4,000 lives and an economic loss as high as 250 billion yuan (35 billion US dollars).

People in Wuhan might still remember messages with names of donors and amounts given crawling across the bottom of the TV screen daily during the disaster. Surprisingly, a large portion of donors, including me, used aliases such as "Falun Gong practitioner" or "Dafa disciples".

While inspecting the big dam during the flood, Jiang Zemin happily cited a group of hard working people to his subordinates, saying: "They must be members of the Communist Party." When told they were Falun Gong practitioners, he became furious and left the site with a jealous and embarrassed expression. After the persecution began in 1999, the government media whipped up lies to defame Falun Gong, and accused the practice of having ulterior motives in supporting the disaster victims.

As a matter of fact, Falun Gong neither had then, nor has now, any such ulterior motive. Falun Gong is a loosely-managed group or people simply cultivating themselves according to their understanding of the basic tenets of the practice, Truthfulness-Compassion-Forbearance. Helping people stuck in disaster areas was a personal matter and no practitioner was persuaded to help. With mercy and kindness, practitioners spontaneously helped flood victims as much as they could. Such selflessness is evidence of the improvement of virtue practitioners obtain through cultivation practice. It is certainly not something attached to any kind of ulterior motive.

Some of the 1998 flood fund donors were later persecuted. Their stories have been excerpted from Clearwisdom.net and are outlined below.

1. Ms. Hsu Liangying, 47 years of age from Hubei Province, not only contributed 5,000 yuan to the flood relief fund but also served home-cooked food to first line soldiers in the disaster areas. The soldiers and villagers were moved to tears. They were deeply impressed by her altruistic contributions. However, this kind practitioner was arrested and sentenced to seven years in prison by the Chinese Communist Party in 2002 just for copying materials about the persecution of Falun Gong. She was handcuffed to an iron door and brutally tortured for days.

2. Ms. Chen Guozhen, an employee of the Agriculture Development Bank in Hubei Province, donated more than 100,000 yuan to the flood fund under the alias "Falun Gong practitioner". She always considers others first in any event. She was illegally arrested and sentenced to three years in prison shortly after the persecution began in 1999 because of her firm belief in the principles of "Truthfulness-Compassion-Forbearance". Her legs were paralyzed as a result of severe torture in a brainwashing center and a forced labor camp. Her family was split up by the political group led by Jiang Zemin.

3. Many people in Zhoukou, Henan Province benefited from Falun Dafa. Some people with incurable diseases such as cancer, cirrhosis, diabetes and cardiovascular disease etc. regained their health after practicing Falun Gong. Some people on the verge of death became healthy after sincerely practicing cultivation.

4. Ms. Zhang Fang, a kindergarten worker, donated 5,000 yuan to the flood relief fund in 1998. She started practicing Falun Dafa in 1996. All her diseases disappeared only a few months after she started practicing. Her family became happier and her husband was delighted to see the positive changes in her. However, prompted by the police after the persecution began, he seriously injured his Ms. Zhang - causing her to be immobile in bed for 33 days.

5. It was reported in the local newspapers that Ms. Zhou Wenjie, a middle school English teacher in Jilin Province, sold her house and donated 25,000 yuan to the flood fund in 1998. She removed her bad habits of competing and chasing after fame and fortune once she became a Dafa practitioner. She was unlawfully arrested by the 610 Office several times in following years. On one occasion, she went on a hunger strike for more than one month before she was released. She left her hometown to avoid being arrested again by the 610 Office. Sadly, she was tortured to death by evil guards in Changchun on May 26, 2002.

6. Mr. Wang Jizhai donated 100,000 yuan to the 1998 flood victims. He was illegally taken to a forced labor camp in 2000 and questioned about his support of the CCP. He was placed in solitary confinement and tortured for challenging their interrogations. He suffered a broken spine. Many other practitioners also suffered through serious torture at the same camp.

7. Ms. Wang Jinju, a famous basketball player, was paralyzed from a sports injury. She regained her health after she started practicing Falun Gong in 1996. After witnessing the miraculous recovery of her health, her whole family became practitioners.

Ms Wang and some fellow practitioners had persistently appealed to the State Council in the months leading up to the persecution of Falun Gong in 1999. When the persecution officially began, they gave up their appeal. Instead, they clarified the truth on Tiananmen Square and called for an end to the persecution. When interviewed by an overseas reporter, Ms. Wang said: "Many of my family members were arrested. I have been arrested several times. I told the police that Dafa saved me when I was paralyzed and in a very vulnerable state. Master gave me a second life. I can't believe all the lies that have been told about Master." Master requires practitioners to follow the principles of "Truthfulness-Compassion-Forbearance". I donated 20,000 yuan to the 1998 flood fund, which I would never have done before I became a practitioner. How can I not speak out for Dafa when it is under attack? Sadly, the persecution has destroyed many people. My brother gave up practicing because of the persecution and died when his old disease recurred. 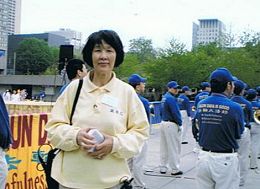 8. Ms. Yue Xuezhi, now 70, donated 30,000 yuan to the 1998 flood fund. She was an engineer for China's Ministry of Aeronautics and Astronautics. She is also a painter and her works have been included in the Chinese ink painter directory 500.

Ms Yue had a bitter life. Her husband was persecuted during the Cultural Revolution until he became mentally unstable, and her son died at age 11. Furthermore, she had frail health. She regained her health after she began practicing Falun Gong in 1996. She was arrested eight times after the persecution began and was sent to a "transformation center" twice. She was again wrongfully sentenced to four years in July 2003. Her spine was broken from the torture she endured when she was in prison. 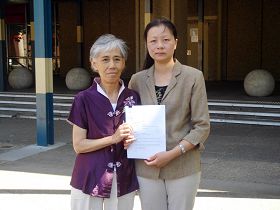 Yue Xuezhi (left) convicted one of the persecutors in Australia.