International Lawyer: "The Choreography Is Some of the Best I've Ever Seen!" (Photos)

"The Choreography Is Some of the Best I've Ever Seen!" 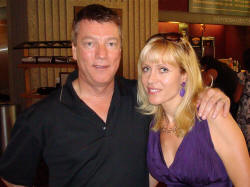 Mr. and Mrs. Bartel at this afternoon's Shen Yun performance.

Among the many delighted audience members were Mr. Bartel, Chair of the law firm Bullivant Houser Bailey's Corporate Finance & International Transactions, and his wife, Mrs. Bartel.

"You see the Chinese tradition coming through the dance and the music, but yet, it's also modern, connecting to the modern audience. I think the performers are doing a great job at conveying the culture to us, in the West. It's enjoyable."

Mr. Bartel has studied Chinese history and has been exposed to Chinese culture.

"I'm constantly exposed to their culture and I think that the performers are doing a good job of expressing the historic culture of China," he said.

Mr. Bartel thought the original scores from the Shen Yun Orchestra were "enjoyable. The music is great!"

Adding, "And the dancing--the choreography, is some of the best I've ever seen! With that many people on stage and all of the movements--it's very elegant."

He marveled at how well the dance sets portrayed the essence of traditional Chinese culture in combination with the orchestra and pageantry of today.

"It's really transitioning between the Eastern and Western cultures. I think it's just well-done. I don't think you can really depict the old traditional style of dances, really historical dances, on stage as it wasn't made for the stage. It has to be choreographed, it has to have music. And the show is really getting the real spirit across," explained Mr. Bartel.

"I like the last one--especially the shoes. I've never seen this shoe type before," she said. 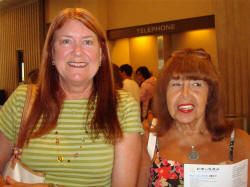 Christina Cicero with Judy Harrasser. Both traveled more than 150 miles to see the show.

Grief counselor, Ms. Cicero, who is also the owner and chief editor of her company, Words, Ink, thought the show was "amazing!"

The talent, the costuming, the flow-it's just really, really awe-inspiring! I really liked learning about the diverse culture within China and the different approaches to life. It's wonderful. I'm very uplifted. It was wonderful," she enthused.

The heart-felt sentiments expressed by the dancers' characters and how these characters overcame an assortment of challenges, deeply touched Ms. Cicero.

She said, "It was uplifting because good triumphed and the person prevails. You know we always prevail."

Noting the diversity in the show, Ms. Cicero said that when people think of China, "Some tend to think of a country like China as one entity, and it really isn't. It's very diverse within the country."

She also noticed how in sync the dancers were with nature, and that the blending of art and nature is seamless. In the show, "they illustrate it very, very well," she said.

When asked to comment on the Shen Yun Orchestra's original scores, she described it in one word, "Incredible!"

Ms. Cicero was keen to point out how the dancers appeared to be enjoying themselves in each performance, and to her, this reflected that there was a strong connection between body and soul that allows them to perform so beautifully.

"We will definitely see it every year at one place or another," she concluded.

Accompanying Ms. Cicero, was her friend, Judy Harrasser. After seeing the show, they both thought that the 150 mile trip to see Shen Yun, was well worth it.

Upon learning that each dancer's costume was handcrafted and fitted for each individual dancer, Judy exclaimed, "Oh, they are? They're amazing!"

"This show is lovely," Judy said, "We saw the ad in the San Francisco Chronicle. We drove down from Redding. I am glad that we did. It's a very lovely experience!" 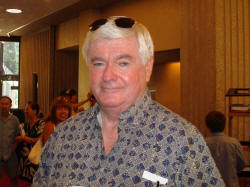 Don Russell, a systems engineer who heard about the show from a flier delivered to his home.

Also attending the show was Don Russell, a systems engineer.

"I think the show was wonderful--terrific performers, terrific costumes, and terrific choreography. Everything about it is just wonderful," said Mr. Russell during intermission. Adding, "The synchronization of the dancers, the movement, the balance--it's just a terrific job!"

Mr. Russell appreciated the perfect balance of the various aspects of the show, saying, "The balance is what's perfect in that. The backdrops, the costumes, the dancers, the music, and all--it's just beautifully done."

Commenting on the music he said, "Oh it's very good. All the tones, modulations, the sound levels--it's just a beautiful show," he said.