(Clearwisdom.net) On the afternoon of June 23, Chinese President Hu Jintao and his delegation arrived in Ottawa for a 2-day visit. In order to ensure that Hu would not see Falun Gong practitioners peacefully protesting the eleven-year persecution of Falun Gong, and other protest groups, the Chinese Embassy made a series arrangements. They hired large numbers of Chinese students to welcome Hu, used Chinese Communist Party (CCP) flags to block Falun Gong practitioners' banners, and occupied the protest spots assigned to Falun Gong. They also paid to have a temporary wooden wall erected outside the main entrance of the hotel where Hu was staying, so that Hu would not see the protests from inside the hotel. In addition, CCP agents took photos of practitioners and harassed them at their protest site. They even went so far as to cancel Hu's press conference. 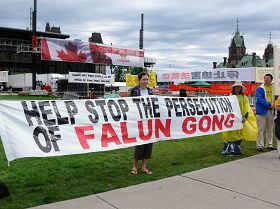 Falun Gong practitioners rallied at Capitol Hill to call for an end to the persecution. 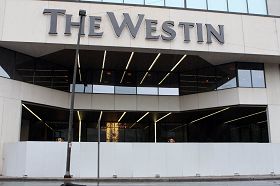 Hu stayed at the Westin Hotel during his visit. The hotel erected a temporary wooden wall at its main entrance to make sure that Hu's delegation would not see the protests.

During Hu's visit, two recordings were made public which revealed the true purpose of Hu's "Welcome" troupe.

According to the first recording, on June 16, the Chinese Embassy gathered Chinese students who are supported by the CCP to get ready for the "battle" with Falun Gong and other groups which planned to hold protests during Hu's visit. The true purpose of organizing the "Welcoming Hu Troupe" was to use Chinese international students to overwhelm the protesters.

The second recording is a speech made by Yuan Pinghua, coordinator of the Chinese Students & Scholars Association in Ottawa. In the speech, Yuan told members of the association the "battle plan" and reminded them that "orders could be given any time."

In both recordings, the speakers emphasized that the "Welcoming Hu" mission was a state secret.

The "battle" started on June 23: Falun Gong practitioners displayed protest banners on the pedestrian barricade across the street from the Westin Hotel on June 22. At about 2:00 p.m. on June 23, two large groups of Chinese people came to the protest site from opposite directions and used CCP flags to cover the Falun Gong practitioners' banners. Among the more than 200 people in these groups, were the chairperson of the Ottawa Chinese Culture Center and the chair of the Ottawa Chinese Community Association.

While such illegal actions were eventually stopped by the police, the CCP supporters did not leave the practitioners' protest site until June 24 at 4:00 p.m.

In addition, the Westin Hotel built a temporary wooden wall outside its main entrance so that the Chinese delegation would not see the protests outside. According to the hotel manager, the cost was paid for by the Chinese Embassy. On Wednesday, Canadian Prime Minister Stephen Harper hosted a banquet for Hu on the third floor of the hotel. Reporters found that all the windows on the floor were covered.

During Hu's visit, CanWest, the Globe Post, CBC, the Toronto Star and many other media reported on the Falun Gong practitioners' protest and how the Chinese Embassy hired people to "welcome" Hu.

“My Understanding After Twelve Years of Fa-Rectification Cultivation”