Congressman Lewis said in the letter:

"Throughout my life, I have been committed to the cause of peace and nonviolence both in the United States and around the world; it is a constant effort that requires the commitment of one's thoughts, words, and actions. I cosponsored H. Res. 605, a resolution recognizing the continued persecution of Falun Gong practitioners in China. This resolution also urged an immediate end to any persecution, intimidation, forced imprisonment, and torture of Falun Gong practitioners. The resolution passed the U.S. House of Representatives on March 16, 2010 by a vote 412-1.

"I congratulate you on the successful celebration of Falun Dafa Week in Georgia and wish you continued success as you prepare to commemorate World Falun Dafa Day." 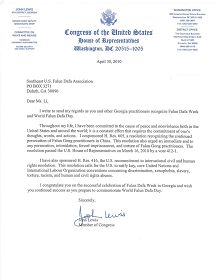