"It's beautiful. There was a lot of great dancing, a lot of singing, very colourful--the colours are just so beautiful," he said.

"I think the expression of spirituality is also of some value," the senator said.

"Obviously the Falun Gong people don't have many opportunities to let the world know that their fundamental freedom of religion, of practicing their spirituality, is denied to them [in China], so this is one of the ways they're doing it. Good for [them]." 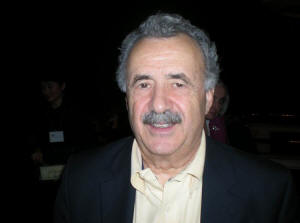 Of the 20 pieces in the show's 2010 program, there are dances representing the folk traditions of China's diverse ethnicities, tales of heroic legends, legends from China's divinely inspired history, and two dances that deal with the persecution of Falun Gong under China's authoritarian regime.

Senator Consiglio was critical of the Chinese regime "who demonize anyone who doesn't agree with them."

"I think the Chinese people fundamentally are very good people who practise good values. The fear I have is that with the government's repression of these issues, it may not improve the values or those principles that I think are very important. But I think the Chinese people will eventually solve the problem because fundamentally, they are very good people."

He added that he believes the worldwide economic crisis "is related to just abandoning values and principles of spirituality."

"A lot of it has to do with not practising some of the basic fundamental values that I think are important in life, so we have to be cognizant that what we do we should do for all of us instead of 'just for me'."

"I think [the show] does give that message."

Mr. Saul is the editor-in-chief of a community newspaper in Toronto, and has won several awards for his contribution to Guyanese cultural life. He is also a playwright, director, producer, and musician.

"Every time I come to the Shen Yun show, I re-energize, re-spiritualize, and it puts me in a higher spiritual mood," Mr. Saul said.

The show, he added, has also influenced his work.

"After seeing three performances, I'm now ready to mould my performance to a fine craft because of the influence of the Shen Yun Performing Arts."

Shen Yun has taught him how to "fuse dance, music, and all the dramatic elements including multimedia into a good representation of classical Chinese culture."

In addition to the technical aspects, Mr. Saul has been particularly inspired by Shen Yun's message.

"I think the beauty of Shen Yun is the way it brings a celestial message of positivity and goodness and love in a very entertaining manner that ordinary people relate with."

He explained how this is influencing his own play. "That is why I keep coming to the Shen Yun show because I am learning how to implant a positive message within a whole entertainment structure."

Mr. Saul said he has been particularly inspired by Falun Dafa's positive message and has been trying to incorporate it in his newspaper. 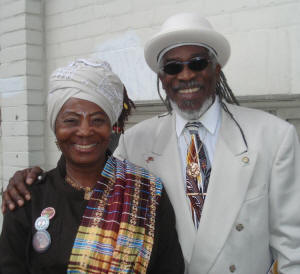 Leon Saul and his wife at the Sunday afternoon performance in Toronto.

Awarding-winning television and radio writer Jerelyn Craden got a Mother's Day present from her sound designer/editor/mixer/engineer son, Omie Craden, that left her deeply moved when he took her to see Shen Yun Performing Arts at the Canon Theatre on Sunday afternoon.

"It's a celebration of Chinese culture and tradition. It was rich in talent and history, very educational, very inspirational," said Omie Craden, founder of Frame by Frame Sound.

Based in New York, Shen Yun Performing Arts is a non-profit dance company whose mission is to revive the true, five-millennia-old artistic tradition of China that thrived before decades of suppression by the Chinese regime. Both Jerelyn and Omie Craden appreciated this aspect of the show.

"I'd say it's enlightening," said Mr. Craden. "They are trying to educate people that don't understand what the situation is necessarily in China. And the repression of people was demonstrated in the show."

Mr. Craden appreciated that aspect of the show. "It should be a little bit shocking, I think. A lot of the world may not be aware that these things are going on. It's good that a show like this, in addition to being beautiful and showing a rich tradition, is also making a statement," said Mr. Craden.

Jerelyn Craden said that Shen Yun's performers showed a lot of heart and the show was very sensitive overall.

"It's beautiful to see the flowing grace of the costuming and the women carrying on and communicating that feminine side of nature which in a sense is also a metaphor for mother nature which is very profound and beautiful," she said. 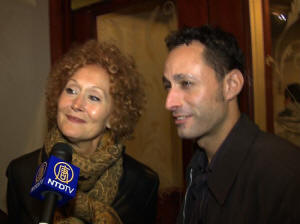