(Clearwisdom.net) At noontime on April 23, 2010, over 100 Falun Gong practitioners and supporters rallied outside the Chinese Consulate in Toronto to mark the eleventh anniversary of the historic April 25 Appeal, and to call on the public to help end the persecution of Falun Gong in China. 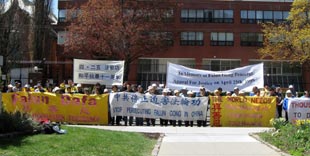 On April 25, 1999, over 10,000 Falun Gong practitioners in China gathered outside the State Council Appeal Office to demand their basic rights of belief and the immediate release of 45 fellow practitioners who had been unlawfully arrested. Though as a result of the appeal the Chinese Communist regime promised to protect the practitioners' rights and released the arrested practitioners, three months later, the regime started a nationwide persecution to "eliminate Falun Gong." The brutal persecution has continued for nearly 11 years.

In an opening remark, Jinzhao Zhang, a representative from the Toronto Falun Dafa Association, said that the April 25 Appeal demonstrated Falun Gong practitioners' great compassion and opened a new page in nonviolent appeals in modern Chinese history. In the past 11 years of persecution, countless practitioners in China have been arrested, tortured, forced to leave their homes, and thousands have even been killed. An independent investigation has confirmed that the regime has been systematically harvesting organs from living Falun Gong practitioners. In contrast to the brutal persecution in China, practitioners worldwide continue to conduct peaceful appeals, clarify the truth, and call for support to end the persecution. 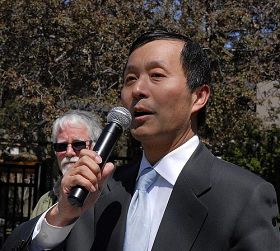 Mr. Zhang said, "The evil nature of the Chinese Communist Party (CCP) determined that it cannot tolerate Falun Gong's principles of Truthfulness-Compassion-Forbearance. Though the then CCP head Jiang Zemin claimed he would eliminate Falun Gong in three months, after eleven years, Falun Gong continues to spread worldwide while the CCP is heading to its destruction."

Michael Craig, chairperson for the China Rights Network, said that Falun Gong practitioners' Truthfulness-Compassion-Forbearance does no harm to anyone and yet they are being brutally persecuted by the CCP. 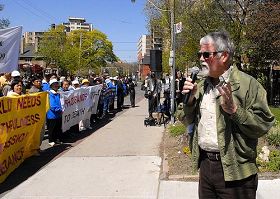 Mr. Craig mentioned renowned human rights lawyer Gao Zhisheng who has been relentlessly persecution by the CCP for defending Falun Gong practitioners' basic rights. He pointed out that there are many other lawyers, rights activists, democracy activists, Tibetans and Uighurs who are being suppressed. The widespread suppression shows that the CCP regime is irrational, as it cannot tolerate normal activities and beliefs and views anyone who seeks any changes as subversive.

Mr. Craig stated, "The CCP regime cannot sustain itself as is for long, as its nature will be seen clearly by more and more people, leading to its eventual collapse."

Mr. Chen, from China, started practicing Falun Gong about one year ago. He said that he was immersed in propaganda against Falun Gong when he was in China and he was very fearful of the practice. However, he said, "After I came to Canada, I saw practitioners who were so peaceful. I started to get into touch with them. Eventually, I decided to practice Falun Gong."

Artist Carole Borsu said that she felt very sad to learn about practitioners' ordeal in China and became a practitioner after she learned more about Falun Gong. "You must know what is happening, you must understand what Falun Gong practitioners have been through. They are fighting for their basic rights," said Ms. Borsu.

Many people who went to the Chinese Consulate to apply for visas to China received practitioners' truth-clarifying materials. Some told reporters that they support justice for Falun Gong and stated that the Chinese people should have freedom of belief.

Mr. Wang, a Chinese immigrant, said, "It is very good that you are here. You have your reasons to be here and are not in agreement with the Chinese government. You should speak out."

“Interview with a Medical Doctor from China: A Knowing Heart Is a Willing Heart”