Germany: "I Hope That the Irrational Persecution Will Soon Be Stopped" (Photo)

(Clearwisdom.net) On Saturday September 5, 2009, Falun Gong practitioners from Ulm and Augsburg held an Information Day activity in Augsburg, in southern Germany, to call for an end to the persecution by the Chinese Communist Party (CCP). There were many people in the city center since it was the weekend and a fine day. Many people stopped in front of the information desk and displays, and carefully read the contents of the display posters. Many people talked to the practitioners. 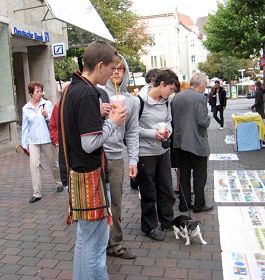 Such a good practice should not be subjected to persecution

A practitioner handed a man a leaflet. The man took it and said, "I know Falun Gong is a good practice, I have Zhuan Falun and two other Falun Gong books at home."

When asked where he had heard about Falun Gong, he said that he had been to China in 1993 and 1994. During the time, he got to know Falun Gong by coincidence. Later, he ordered Falun Gong books and read them at home. He was regretful that he was so preoccupied by his daily life that he had not truly begun the cultivation practice. This time, he asked for the practitioners' contact information and said that he would contact local practitioners while in Augsburg.

When talking about Falun Gong practitioners being brutally persecuted by the CCP, the gentleman said, "Such a good practice has been subjected to inhuman persecution, it is absolutely incorrect." He believes that truth will ultimately prevail in the world.

More people should learn about the persecution

A woman saw the informational displays and was drawn by the content, wanting to find out more. When she saw the Falun emblem, she asked what it meant. When the practitioner explained to her that it is a symbolic image of the Buddha School, which has had a long history, the woman said that she felt a kind of energy emitted from the emblem, which made her feel comfortable.

She said that she found it hard to understand why such a good cultivation practice, that brings people happiness and physical health, was suppressed in China. She was disgusted with the CCP's way of doing things, after hearing about the CCP dictatorship's hypocrisy, jealousy and cruelty. She also said that she knows that many Christians are also victims of the CCP's persecution.

This lady said that she would talk to her friends and family about what she had seen, and try to have more people learn about Falun Gong and the CCP's persecution. She hopes that the irrational persecution will be stopped soon.

“Ms. Li Juhua's Life in Danger from Persecution, Family Not Permitted to Visit”